Bassist, composer, and CT native Mario Pavone continues to create music that challenges himself, his associates and the audiences in the most positive ways.  For over five decades, he has created his own path, working alongside the late saxophonist Thomas Chapin, vibraphonist Bobby Naughton, and others, leading his own ensembles for the past 18 years.

The Trio he brings to Firehouse 12 in New Haven this coming Friday (6/03) includes the impressive young pianist Matt Mitchell (Tim Berne Snakeoil, Dave Douglas) and the multi-faceted percussionist Tyshawn Sorey (Fieldwork, Paradoxical Frog). The ensemble released "Blue Dialect" in 2015 on the Portuguese Clean Feed label, an album filled with wonderful interactions, splendid solos, and impressive forward motion.  Expect the same at this gig as the band is preparing to record its next album the following day.

Early in 2016, alto saxophonist Greg Abate issued "Kindred Spirits" (Whaling City Sounds), a double album featuring his mentor Phil Woods and the Tim Ray Trio.  Mr. Woods passed several months before the CD (recorded 8/11/2014) was issued but sounds in good form as he, Abate and the Trio (pianist Ray, bassist John Lockwood, and drummer Mark Walker) run through a sparkling group of standards (plus a bit of dialogue).

This Friday, Mr. Abate, the Tim Ray Trio, and special guest Richie Cole (alto saxophone) come to The Side Door Jazz Club in Old Lyme CT to pay tribute to Phil Woods and the delightful album mentioned above.  Cole, like the late Mr. Woods and Abate, has greatly been influenced by Charlie Parker but, like the other two gentlemen, moved on to create his own sound and style.

Join these fine musicians as they spend an evening "Celebrating Phil Woods" - sounds like a delightful excursion for an early June evening.  Doors open at 7:30 p.m. with the music starting at 8:30.  For more information, call 860-434-0886.

Here's the Quintet with Phil Woods dancing through "Yardbird Suite":

On Saturday night, The Side Door welcomes Mike LeDonne's Groover Trio.  LeDonne, well known and respected for his piano work, has been playing Hammond B-3 organ a lot more over the last decade.  Having first come on to the jazz scene in the 1970s working wit Benny Goodman and Sonny Rollins, LeDonne spent over a decade as music director with vibraphonist Milt Jackson and has worked with saxophonist Benny Golson for nearly two decades.

For the Old Lyme appearance, he's joined by guitarist Mark Whitfield and drummer McClenty Hunter.  Expect the music to be funky and to swing with abandon.  The music commences at 8:30 p.m.  For more information, go to thesidedoorjazz.com.


Also on Saturday (6/04), The Buttonwood Tree, 605 Main Street in Middletown, welcomes back guitarist and composer Sinan Bakir for an evening of his music for Trio.  The Turkish-born Bakir came to the United States from his native land to study music at the Hartford Conservatory; he liked it so much that he stayed, forsaking his engineering degree for a life in music.  He's released two CDs and is busy performing in New York City, Stamford CT, Northampton MA and elsewhere.  Filling out the Trio will be bassist Silvain Castellano and drummer George Mastrogianis.

The music starts at 8 p.m.  For more information go to www.buttonwood.org or www.sinanbakir.com. 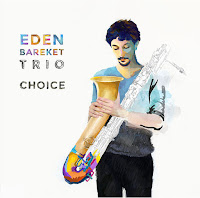 Baritone saxophonist Eden Bareket, born in Buenos Aires, Argentina and raised in Tel Aviv, Israel, moved to the United States/New York City in 2013 and has become a very busy musician.  He's a member of drummer Ari Hoenig's Nonet, Eyal Viner's Big Band, and the Anbessa Orchestra a.k.a LIONS, a septet dedicated to playing Ethiopian music of the 1960s and 70s.

For his U.S. debut album , "Choice" (Fresh Sound New Talent - his first Lp was recorded and issued in Israel - click here), he fronts a Trio that features his brother Or Bareket (bass) and Felix Lecaros (drums).  The music the Trio creates is melodic, playful, soulful, filled with smart interactions, always involving, and, though all but one of the nine tracks are Eden's original compositions, sounds as if each member has a say in how the piece sounds.  Take the title track.  Introduced by the bass (a slowly descending line with harmonics), the melody is guided along by the excellent brush work of Lecaros (a native of Chile who also works with bassist Joe Fonda).  Bareket plays in the sax's mid-to-higher range, creating a solo that has allusions to the work of Sonny Rollins and Gerry Mulligan.  "Arguing With Myself" is a forceful and funky piece in which the saxophone and bass plays phrases that wrap around each other and sometimes overlap.  During the sax solo, the bassist and drummer lock into a funky beat that really drives the piece forward.  One of the prettier pieces, "The Last One", has a most delicate melody.  The musicians allow the song to unfold slowly, never pushing but letting the music flow. The saxophonist plays throughout yet this always sounds like an ensemble piece. Bassist Bareket, who also works with Ari Hoenig as well with pianist Jean-Michel Pilc and the 3 Cohens, has a lovely sound (well recorded by Luis Bacqué who also mixed and mastered the recording in his Roselle, New Jersey, studios) - his work is stunning throughout. The one non-original is Peter Gabriel's "Don't Give Up", a beautiful melody that the Trio plays with great delicacy and fire (especially the saxophonist).  There is also a subtle chorus of baritone saxes  about 2/3rds of the way through the 7-minute song.

Though the baritone saxophone is often thought of as a foundational instrument in a big band, musicians such as Harry Carney (from the Duke Ellington Band), Joe Temperley (long-time member of the Lincoln Center Jazz Orchestra who passed a few weeks ago), Gary Smulyan, the afore-mentioned Mr. Mulligan, Claire Daly, and a few others have proven that the big reed can be just as musical as a tenor, alto, or soprano sax.  Eden Bareket is a very musical player, comfortable in the mid and upper ranges of his chosen instrument and not afraid to play softly.  And, he can also belt it out when the music calls for it.  "Choice" is a delightful musical adventure, the work of three musicians who are tuned in to the music and into each other. Give this one listen and you'll want to return time and again.

For more information, go to www.edenbareket.com.

Here's the Trio in action from a 2014 live-in-studio date with the song that opens the CD: