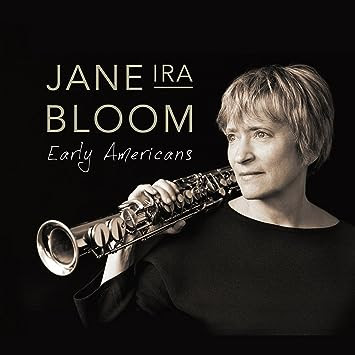 In a career that has spanned over 3 decades, 15 albums, numerous collaborations with musicians from around the world, dance troupes and even the National Aeronautics and Space Administration (NASA), soprano saxophonist and composer Jane Ira Bloom has never recorded a trio album. With the release of "Early Americans" (Outline Records), she can cross that accomplishment off her carer bucket list.  With her latest associates (and long-time friends), drummer Bobby Previte (he has appeared on 7 of Ms. Bloom's recordings) and bassist Mark Helias (this is his third), she has created a program of 12 originals plus a stunning solo reading of Leonard Bernstein's "Somewhere."

The album opens with "Song Patrol", a rhythmic adventure with a handsome melody. First, the listener notices how the drums and bass immediately lock not the rhythms then the lovely soprano sax enters with the melody. Ms. Bloom's tone, unlike any other soprano saxophonist (that's a compliment), is creamy, husky at times but always with a vocal quality.  "Nearly", a tribute to the late trumpeter Kenny Wheeler, is an attractive ballad, with the echo of the saxophonist often filling the silence between phrases.  There's a West African feel to the exciting "Hips & Sticks", Previte really dancing while Helias moves his melodic accompaniment around the bass. Listen to the percussive quality of Ms. Bloom's playing, intimating a flute or bird song. Can't miss the James Brown funkiness of "Rhyme or Rhythm" as the rhythm section locks into the beat while Ms. Bloom dances atop the infectious sounds, her electronically altered sound casting a spell.  Electronics reappear on "Big Bill" a piece that just rocks out with the soprano saxophone darting like a sparrow over the bouncy bass lines and thumping drums. The ending will make you chuckle.

The program includes several lovely ballads besides the two solo pieces. "Mind Gray River" is a powerful, impressionistic, work, riding on the strummed bass chords and thumping drums/splashing cymbals.  The interplay of sound and silence, bowed bass and clicking percussion, and a blend of long and short phrases from the saxophone lends an abstract beauty to "Say More."  The stunning bass work of Helias on "Other Eyes", a duet adventure with Ms. Bloom, is simple, direct and ever-so-melodic. The soprano melody is also direct yet with a dream-like quality.

"Early Americans" is a joy from beginning to end. It's fun, melodic, rhythmical, adventurous, emotionally satisfying, and, at times, quite moving.  Jane Ira Bloom continues to search the worlds around her, above and inside her to create music that resonates long after the sounds fade.  Few musicians are comfortable taking the chances that she has throughout her career - her contemporaries such as Dave Douglas, her long-time friend Fred Hersch, Vijay Iyer, and Henry Threadgill come to mind.  Even fewer have the emotional depth she plumbs through her music.  Find this album; listen to it over and over until your soul is satisfied.

On the surface, bringing together the talents of David Murray (tenor saxophone, bass clarinet), Geri Allen (piano) and Terri Lyne Carrington (drums) may seem a bit far-fetched but actually makes great sense.  Murray, now in his 4th decade as a musician, has recorded over 130 albums and still seems as young as he did when he joined the World Saxophone Quartet in the late 1970s. Ms. Allen recorded her debut as a leader in 1984, having grown up in Detroit, MI, and studying at Howard University, and going on to be a major voice on the contemporary scene. Ms. Carrington also began her career in the 1980s going on to play with Wayne Shorter, Dianne Reeves, Steve Coleman, and Herbie Hancock (among others) - she's also has a number of critically acclaimed albums and won three GRAMMYs.

"Perfection" (Motéma Music) is their first album together and comes mighty close to living up to its name. The song that gives the recording the name is a previously-unreleased transcription of an Ornette Coleman solo from the early 1960s that trumpeter Bobby Bradford transcribed and later gave to Murray.  It's the only track with extra musicians - bassist Charnett Moffett, trombonist Craig Harris, and trumpeter Wallace Roney, Jr. - and is a high-energy romp with solos all around. 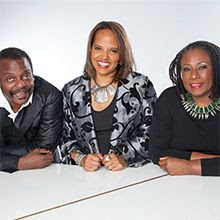 Given that both Murray and Ms. Allen are such individualists and powerful soloists, it's important to note how much of a group effort this album is  Each member contributes original pieces - three each by Murray and Ms. Carrington while Ms. Allen provides two plus a lovely arrangement of the traditional folk tune "Barbara Allen."  The pianist first heard that song in rehearsal with bassist Charlie Haden and, since it's her mother's name, she chose to play it as a tribute to both the bassist and her parent.  Ms. Carrington's "Geri-Rigged" is a high-powered song that showcases how well the drummer composes and interacts within the ensemble.  She and the saxophonist take off at one point, reminiscent of how John Coltrane and Elvin Jones used to duet. Her "Samsara (for Wayne)" is a lovely ballad tribute to Wayne Shorter, featuring fine solos from both Ms. Allen and Murray (who always sounds like himself).  Here, Murray's tone is deeper, filled with emotion.  The saxophonist composed "The David, Geri & Terri Show", a rhythmic jaunt with exciting solos from all and an especially fiery exchange between Ms. Allen and Mr. Murray. His "Cycles and Season" bounces between funky and straight-ahead rhythms. The trio cycles through several iterations of the theme and chorus before the saxophonist plays an impassioned solo.  Ms. Carrington does a lovely tap dance on drums at the opening of and through the duration Ms. Allen's "For Fr. Peter O'Brien" with Mr. Murray on bass clarinet and the composer playing a bluesy yet dancing piano solo.  The piece is dedicated to the Reverend O'Brien (1940 - 2015), the first Executive Director of the Mary Lou Williams Foundation and long-time friend of jazz.

The Murray, Allen & Carrington Power Trio is no misnomer. This album is quite powerful but not just in how the music is played but also in the emotional power of the songs and the wonderful interactions of the musicians.  Let's hope this ensemble can continue to build upon its "Perfection."

For more information, go to motema.com/artists/murray-allen-carrington-power-trio/. And, here's the Trio in action - with its guests - on the title track:

Trumpeter and composer Duane Eubanks, the youngest of the three brothers from Philadelphia, PA. who have made their impact of contemporary jazz, released his Sunnyside Records debut in 2015, a sextet date titled "Things of That Particular Nature". He pared the group down to  the rhythm section of Dezron Douglas (bass) and Eric McPherson (drums) and you can hear the results on "DE3: Live at Maxwell's" (Sunnyside).

What's obvious from the outset is that this is a true trio effort (even down to Jimmy and Deena Katz's cover image with the drummer in the middle - on the back, the bassist is in the middle).  The leader's liner message notes the Hartford, CT. connection with both McPherson and Douglas graduates of the Jackie McLean Institute of Jazz at the University of Hartford (the bassist is a native city as well).  What stands out is the terrific interactions of the trio, the thick bass sounds dancing over the active drumming while the trumpet weaves his way in and out of the spotlight.  "A Slight Taste", its rhythmic melody introduced by composer Douglas while McPherson's brushes scamper over the drum kit, is a delightful romp. The slow blues of "Saturday Moanin'" (credited to all three) features a handsome trumpet melody; the deliberate pace of the piece allows the listener to hear each part and the leader's soulful solo perfectly captures the mood.

"Strokish", the longest piece in the program at 7:09, opens with an exciting three-minute drum solo, that leads into a high-powered dance for the trio.  The furious "walking" bass lines and splendid drum work gives Eubanks support for a ripping solo. Douglas's melodic and percussive bass solo leads his musical partners into "Ebony Slick"; he and McPherson then set up a funky rhythm for the hard-hitting trumpet.  Eubanks play the tune's theme in the horn's middle range while his solo dances through the octaves.  The album's closer "Little Rock" (the composition also credited to the trio) builds up from the lovely circular bass lines into a conversation between the trumpeter and drummer that gives both the freedom to move in and away each other.  There are moments near the close where the trumpet lines are fragments of melody but the bassist brings the music to a gentle (and satisfying) finish.

DE3 and co-producer Jimmy Katz set up the recording equipment in New York City's legendary Maxwell's Drum Shop, creating a sonic atmosphere like NPR's "Tiny Desk Concert."  You don't hear the audience but the results are intimate, drawing the listener in, hanging on every sound.  Duane Eubanks, who has worked with numerous artists from Elvin Jones to Alicia Keys, is making his mark as a leader and this new album is, arguably, his best.

For more information, go to www.duaneeubanks.com.  To listen to several tracks (with an option to purchase the recording), go to sunnysidezone.com/album/live-at-maxwells.  Duane Eubanks brings a Quartet to The Side Door Jazz Club in Old Lyme, CT on June 10 - to find out more, go to thesidedoorjazz.com.
Posted by Richard B. Kamins at 6:57 PM