"People Who I Love" 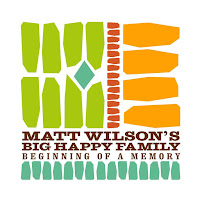 Matt Wilson's Big Happy Family is a big band unlike any you have probably ever heard.  For his new recording, "Beginning of a Memory" (Palmetto Records), the drummer, arranger, and composer brings together members from the different ensembles he leads - Arts & Crafts, the Matt Wilson Quartet, and Christmas Tree-O - and they play a program dedicated to Wilson's wife Felicia, who passed away in June of 2014.  The recording features 17 tracks, 13 musicians (many tracks feature as many as 10 playing and one features 11), Wilson's own Liberation Army; unlike the late Charlie Haden's ensemble though, this music does not rail against fascism and corrupt politics but celebrates the beauty and love that Felicia brought to the drummer, his four children, their community, and the world.

The material ranges from the marching band intro, "Score", to sweet ballads such as a "Getting Friendly" to the heavy-metal madness of "Schoolboy Thug" (if you've ever seen the Quartet in person, this is usually the "kick-out-the-jams" closer). Along the way, there's the bluesy "Lester" (a tribute to Lester Bowie first recorded by Arts & Crafts in 2001) featuring the "war-wah" trumpet and cornet of Terell Stafford and Kirk Knuffke.  Alto saxophonist Andrew D'Angelo, a member of Wilson's first Quartet, contributes the burning "Andrew's Ditty", that features short but powerful solos from both brass players and saxophonists Jeff Lederer, Joel Frahm, and the composer plus a rim-rattling spot for the leader. The bluesy "25 Years of Rootabagas" (is this a Frank Zappa reference?) is a ever-so-slow treat for trumpet, cornet, clarinet, and the accordion of Gary Versace.  The lovely title track has a poignant melody and soulful playing from Knuffke, D'Angelo, and, once again on accordion, Versace.  Listen for the lovely background work of Stafford and bassists Martin Wind and Paul Sikivie.  "Flowers for Felicia (Orchids - Wildwood Flower)" is a beautiful ballad for clarinet (Lederer), trumpet, tenor saxophone, piano, two basses, acoustic guitar and dobro (producer, engineer, and former label owner Matt Balitsaris) and plus stunning brushes work from Wilson. It's an exquisite tune as is "July Hymn", the musical prayer played by the brass and reeds that closes the album.  Pianist Larry Goldings makes his only appearance on the pretty solo piece, "How Ya Goin'?", played on what sounds like an old upright piano.

Besides "Schoolboy Thug", there are playful pieces such as "Go Team Go! - Endless Love" that pairs a rollicking football marching band arranged by Sun Ra with Yosuke Inoue's lovely solo bass reading  of Lionel Richie's "Endless Love" (as the late Kurt Vonnegut used to say "Go figure.") The oddly-titled "Request Potato" matches a mechanical beat a la Devo with a raucous melody inspired by Albert Ayler and goes out on an ever-accelerating swing beat pushed forward by the drums and three bassists, 2 acoustic and Chris Lightcap on electric bass. "Feel the Sway" is a feature for the bassists (minus Inoue), all of whom get to solo over the steady beat of the leader.

Like many of us, Matt Wilson seeks and finds solace in family, friends, and community in times of sadness.  Yet, with "Beginning of a Memory", he also helps others to see the brighter side of life through the creation of music, some of which soothes, some of which makes us laugh.  This Big Happy Family brings comfort and joy not only to the audience but to those people who gathered to create the music.