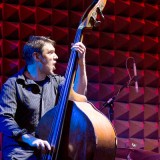 Firehouse 12 in New Haven welcomes native son Ben Allison on Friday May 13 for the latest installment of its Spring 2016 Concert Series.  The bassist and composer will be bringing a new Trio, one that features Jimmy Greene (tenor and soprano saxophones) and Rudy Royston (drums).  All of them have appeared numerous times in the Elm City performance space / recording studio (for Greene, it is his 8th gig in 11 years).  Allison, recently elected the President of the NY Chapter of the Recording Academy, has matured into one of the finer composers on the contemporary scene. He is also one of the better "fundamental" and more melodic bassists; like Mario Pavone, he builds his compositions from the rhythm section outward.  Allison has released 12 CDs as a leader or co-leader plus three with The Herbie Nichols Project, a group he co-founded with pianist Frank Kimbrough.

The Ben Allison Trio will play 2 sets - 8:30 and 10 p.m. - tickets for both sets are available by going to firehouse12.com.  To find out more about Mr. Allison, go to benallison.com.

The Side Door Jazz Club presents yet another stellar weekend of first-class music.  On Friday, The Door opens to Rene McLean Pentagram Music of the Spirit - Celebrating Jackie McLean.  Rene (saxophones, flutes), the son of the late saxophonist, activist, and educator, Jackie McLean, has had a very busy career and is on the faculty of the Jackie McLean Institute at the University of Hartford. He's bringing quite the ensemble, including Alan J. Palmer (piano), Lesedi Ntsane (trumpet), Ronnie Burrage (drums), Hartford-native Dezron Douglas (bass), and Neil Clark (African percussion).

On Saturday, it's pianist Andy Milne & Dapp Theory.  Milne creates that brings together elements of jazz, hip hop, and funk in a most exciting fashion.  His ensemble - Aaron Kruziki (saxophones, clarinets), Chris Tordini (bass), Kenn Grohowski (drums), and John Moon (percussive poet) - has been together for a while and has grown into an impressive live band.  Whirlwind Recording released the band's latest album, ""Forward In All Directions", in 2014.  Produced by the ex-Yellowjackets bassist Jimmy Haslip, the music may remind some of Weather Report with its bow to Middle Eastern, African, and South Amercan sounds.

The band takes the stage at 8:30 p.m.  For reservations and more information, go to thesidedoorjazz.com.

Here's Andy Milne & Dapp Theory in concert from July 2015 playing a song from the new recording: 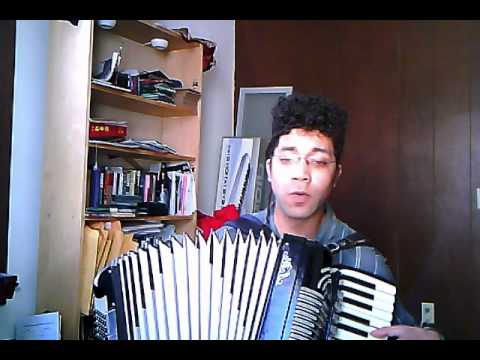 On Saturday, the Uncertainty Music Series continues with a home-grown double bill. Accordionist Adam Matlock (pictured left) plays a solo concert with material that comes from his latest album, "Lungfiddle" released on the Off Record label.  The music is experimental yet approachable, often taking time to unwrap the melody, sometimes blending sound and silence.  To find out more and hear samples of the music, go to anhistoricmusic.bandcamp.com/album/lungfiddle.

Also on the bill is the duo of Anne Rhodes (voice) and Chris Cretella (guitar).  The music starts at 8 p.m. in the comfortable performance space of Never Ending Books, 810 State Street in New Haven. For more information, go to www.facebook.com/uncertaintymusic/.

Joe Morris (guitar, bass) and Stephen Haynes (cornets) have curated a successful season of "Improvisations:: Arcade" at Real Art Ways, 56 Arbor Street in Hartford.  They always have a "grand finale" in May and do so again this Sunday at 3 p.m.  Dubbed "Spectacle 2016", the concert will feature various combinations of the 10 musicians invited.  Besides Messrs. Morris and Haynes, the lineup includes Kaoru Watanabe (flutes), Andria Nicodemou (vibraphone), Andrew Drury (drums, percussion), Mat Manieri (viola), Kyoko Kitamura (voice), Carl Testa (bass), Ben Stapp (tuba), and Ben Hall (tympani, drums, percussion).  What to expect? With this impressive ensemble, the music can and will go in many directions so, expect to be surprised, challenged, and delighted.

Drummer/composer Jeff Williams (Dave Liebman, Stan Getz, Joe Lovano) has expanded upon the format of his first two CDs for Whirlwind Recordings, both quartet dates, by adding chordal instrument. Guitarist Phil Robson and pianist Kit Downes (also Fender Rhodes), joins Williams, Josh Arcoleo (tenor saxophone), and Sam Lasserson (acoustic and electric bass) Still, "Outlier" has the same exploratory manner as the other ones, 2011's "Another Time" and 2013's "The Listener."  The interaction of Robson's airy guitar sounds and the piano block chords with the forward motion of rhythm section gives the title track an infectious energy. "The Interloper" bursts out of the gate with Williams kicking his way around the bluesy theme. Arcoleo and Downes takes their cues from the drummer, playing forceful solos (especially the pianist) before the piece calms down for a bass solo.

Williams' excellent brush work meshes with Lasserson's melodic bass at the opening of "Meeting A Stranger", a ballad that includes a fine tenor spot.  Pay attention to the work of Downes and Robson underneath the solo, both "comping" yet never getting in each other's way.  The pianist's unaccompanied introduction to "New and Old" leads one to believe that the track is also a ballad; once the rhythm section comes in, the pace picks up for the melody and even more for the solos (save for the bass spotlight). The melody of "Hermeto" is shared by the saxophonist and guitarist while Williams really fires up the rhythms. They return to the theme several times before Robson and Arcoleo take expansive solos.  The chordal structure and overall feel of the track is similar to that of Steely Dan's "Aja", leading to a fiery climax.

Jeff Williams does not take may solos on "Outlier", although his opening salvo on the final track, "Oddity", leads the way into a high-powered romp. He is one of those drummers who leads from his chair; he never overpowers his ensemble but gives every piece a sense of flow that makes the music sing, swing, and, at times, dance.  His brush work is exemplary as is his cymbal work.  This ensemble is blessed by having Phil Robson and Kit Downes, both leaders in their own right.  "Outlier" is delightful music that washes over the listener and brightens the mood.

For more information, go to www.willfulmusic.com.

Here's Jeff Williams and this U.K. Quintet live in concert from 2015: