Yes, You Can Go Home Again (and Again)

"Charles Ives Take Me Home" is a play written by Jessica Dickey and first performed off-Broadway in 2013. There are only 3 characters. Professional violinist John Starr, his daughter, a college basketball coach, Laura Starr and the narrator and sometimes character, the composer Charles Ives (pictured). In the play, Ives has come to the Julliard School in New York City to act as a substitute in a Composition class taught by William Schumann. The father is always arguing with his daughter about her choice of sports for a career yet it turns out that Ives is a big sports fan. At one point early in the play, the teacher tells his class that "All music is founded on repetition" and goes on to compare it to how baseball is organized. Later on in the speech, he emphasizes "Music IS repetition. Just like memory. In fact, without memory there would be no music. Think about it.....As we listen to a piece of music we remember (playwright's emphasis) the tones we have just heard. And we connect them to the tones we are hearing. This is memory. That's why listening to music, if the music compels you to really listen - feels like coming Home." (copyright 2013, published by Samuel French) 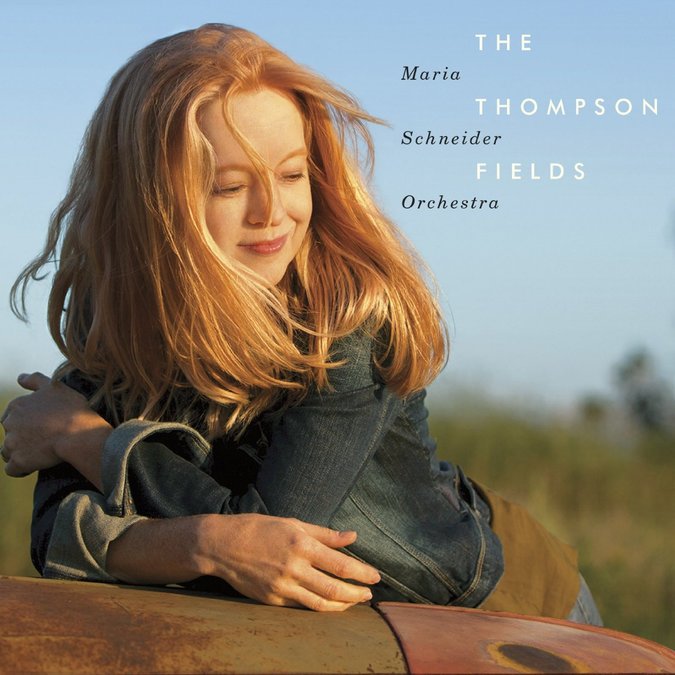 "The Thompson Fields" (ArtistShare) is the 8th recording by composer/arranger Maria Schneider and her first with the Maria Schneider Orchestra since 2007's "Sky Blue." The disk contain 8 tracks - ArtistShare participants also receive 2 downloads - and , with those extra tracks, there is over 90 minutes of new music.  Ms. Schneider, who studied with Bob Brookmeyer (whose influence is evident - to me - on several tracks) and "understudied" (served as a copyist) with Gil Evans, is, arguably, the finest composer of this time. And, I would argue, she does not really "write" jazz. Yes, the MSO features 5 reeds, 4 trumpets, 4 trombones, piano, electric guitar, acoustic bass and drums plus the "permanent" addition of accordion. Yes, the pieces contain solos, and there are rhythms from Brazil, several tracks have blues progressions while others display "swing" and you can hear "free" sections as well as Americana.

These songs tell "stories", convey message without words and, more often than not, the story relates back to Ms. Schneider formative years in Windom, Minnesota.  Like James Joyce, who wrote lovingly about Dublin, Ireland, in "Ulysses" while living in Switzerland and France, the composer's memories of home are burned into her being (she has lived in New York City since the late 1980s).  Her love of birds, of family and friends, all have find their way into her music (and have since her 2nd recording, 1996's "Coming About"). Like before, several of the pieces are "remembrances", even elegies.  "A Potter's Song", the dedication to long-time Orchestra member Laurie Frink (1951-2013), features the accordion of Gary Versace and relates to the late trumpeter's other passion, creating pottery.  "Lembrança" became a dedication to Brazilian clarinetist and saxophonist Paulo Moura (1932-2010) who passed at the time Ms. Schneider finished the composition.  The rhythms blend tango and samba (drummer Clarence Penn and guest percussionist Rogerio Boccato are a splendid team) while bassist Jay Anderson, guitarist Lage Lund (who replaced original guitarist Ben Monder) and pianist Frank Kimbrough (who came aboard before that second recording) make sure the bottom is solid. There is a wonderful dream-like section in the middle of the piece that includes a melodic bass solo and it's a treat hearing the percussionists welling up beneath the melodies of the different sections.

Lund's folk-influenced guitar lines lead in the title track, with accordion for the only backing until the the piano and bass come in.  Kimbrough introduces the melody line which then moves off into the reeds and brass and then the pianist returns for the solo. His phrases sound like the wind blowing through the hay, especially with the horns moving below. When the brass and reeds step out, the music has a Copland-esque feel, clouds floating above the farms and streams. As the sections drop away, Lund's guitar solo moves out front over the simple yet highly effective bass and drums plus the mesmerizing piano chords.

Just listen.  Notice how the brass and reeds take flight as they play melodies and counterpoint.  Listen for the brilliant solos. The alto saxophone of Steve Wilson is powerful, forceful yet with moments of grace on "Nimbus" (he plays for over 6 minutes). Rich Perry's soulful tenor saxophone dances atop the Orchestra on "Home", caressing the notes like a father with a small child. The interactions of trombonist Marshall Gilkes and trumpeter Greg Gisbert on "The Monarch and the Milkweed" tell quite the story while  Donny McCaslin (tenor saxophone) and Scott Robinson (baritone sax) expand upon the themes of "Arbiters of Evolution" (one hears a touch of Burt Bacharach in the chords and waltz tempo) - check out Clarence Penn's fiery drumming under the tenor solo).  Robinson's lovely alto clarinet is featured on the opening "Walking By Flashlight", a piece that first appeared on "Winter Morning Walks", Ms. Schneider's 2011 recording with soprano Dawn Upshaw.  The trilling clarinet lines, the piano and accordion walking alongside as the sections swirl and fade away, is so very attractive, so very comforting.

Jazz, though it encompasses many different and evolving styles, is too confining a word to describe the music of Maria Schneider Orchestra. So is classical and "popular".  When you give this recording to a loved one or a friend, let him or her decide what to call it. As Ms.Schneider has done so vividly over the past 2 decades, her writing on "The Thompson Fields" harnesses the power of memory, the power of wonder, of curiosity and, if you are willing to drop your defenses, to walk down these musical roads, you may hear echoes of your home, of your life.

For the record, the orchestra consists of the following musicians: