As the Firehouse 12 Spring Concert Series winds down to a precious few, the management throws a fascinating curve.  This Thursday evening at 8 p.m., the performance venue opens its very heavy door to contemporary classical pianist and vocalist Lisa Moore.  The Australian native and former member of the Bang On A Can Allstars, is no stranger to the space as this is her 6th appearance in 10 years and third in a solo setting. The program, titled "Moving Mountains", features the World Premiere of Stephen Cabell's "Three Movements for Piano", the US Premiere of "Sliabh Beagh" from Australian composer Kate Moore (no relation), John Luther Adam's "Among Red Mountains", and Chris Rogerson's "Noble Pond." There is only one set. To find out the artist, go to www.lisamoore.org.

The following evening (June 5), alto saxophonist and composer Rudresh Mahanthappa also makes his 6th appearance in the Elm City performance space (his maiden voyage was in May of 2007).  This is his 4th show as a leader and celebrates the release of his latest CD, "Bird Calls" (ACT Records).  The music, all composed by the leader, is based on and influenced by Mahanthappa's love for Charlie Parker. Joining him will bassist Francois Moutin, pianist Matt Mitchell, the exciting young trumpeter Adam O'Farrill, and drummer Jordan Perlson (all of whom perform on the CD save for the drummer).  The compositions and performances on the recording are incredibly exciting, there's such a joy in the group's playing, I would not be surprised to hear that the music is even better in person.

Here's a taste of the new recording:

Busy weekend at The Side Door Jazz Club in Old Lyme with 3 shows in 3 nights.  In a special Thursday showcase, Jan and Ken welcome the Steve Davis Quintet as they celebrate the release of "Say When", the trombonist's tribute to one of the biggest influences on his sound, the late J.J. Johnson.  Joining the Hartt School Professor will be the ever-youthful Harold Mabern (piano), Eric Alexander (tenor saxophone), Nat Reeves (bass) and Joe Farnsworth (drums).  Expect this music to swing mightily especially with the man from Memphis in the piano chair.

On Friday night, the young Ukrainian-born pianist Vadim Neselovskyi comes to town with his Trio for 2 sets of music that will range from jazz to classical and other stops in-between. A graduate of the Berklee School of Music in Boston, Neselovyski has worked with Pat Metheny and toured extensively with vibraphonist Gary Burton.  Not sure who's in the rhythm section (I'll add it to the post when I find out) but you are sure to be impressed. His only US recording as a leader is the 2013 solo piano CD "Music for September" (Sunnyside Records). To find out more, go to www.vadimneselovskyi.com.

Here's a track from that Sunnyside debut: 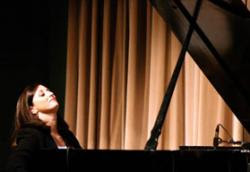 On Saturday June 6, it will be Renee Rosnes sitting behind The Side Door piano and the Canadian native (and wife of pianist Bill Charlap) brings a splendid Quartet including vibraphonist Steve Nelson, bassist Todd Coolman (such a great last name for a jazz musician) and the delightful drummer Lewis Nash.   Ms. Rosnes has worked with many jazz greats including Joe Henderson, Wayne Shorter and Bobby Hutchinson. She spent 11+ years touring with the legendary saxophonist James Moody plus spent 6 seasons with the SF Jazz Collective (2004-09).  As a leader, Ms. Rosnes has released 13 recordings.

Another successful season of the "Improvisations" series at Real Art Ways in Hartford comes to a close this Sunday June 7 with "Spectacle II." Join curators/organizers Stephen Haynes (cornets) and Joe Morris (guitar, bass) with 13 other musicians for a concert that will most assuredly knock your socks off (I hate to get technical).  This year, the participants include vocalist extraordinaire Fay Victor (pictured), Allan Chase (saxophones), Jerome Deupree (drums, percussion), Adam Matlock (accordion),
Junko Fujiwara (cello), Minta White (flute), Sam Lisabeth (guitar), Will Bridges (alto saxophone), Travis Bliss (tenor saxophone), Zachary Bowden (bass), Jaimie Branch (trumpet), Jason Belcher (baritone horn), and the ever-adventurous Andrea Parkins (accordion). There will music performed by groups of different sizes throughout the afternoon while Ms. Victor weaves her magical vocals in and out of the sounds.  For more information and reservations, go to www.realartways.org/event/improvisations/2015-06-07/. You can also call RAW, which is located at 96 Arbor Street in the Capital City, at 860-232-1006.

In this week's CD Pick, Stephen Haynes will release his new CD on June 9.  Titled "Pomegranate" (New Atlantis Records), the album catches Mr. Haynes with an exciting quintet that features Mr. Morris (guitar), Ben Stapp (tuba), William Parker (contrabass violin, sintir, bass shakuhachi), and the amazing percussionist Warren Smith (drums, percussion, marimba). The recording captures the musicians in the performance space of Firehouse 12 in March of 2013 with music dedicated to Haynes' teacher and mentor Bill Dixon (1925-2010). In the notes on the recording's Bandcamp page, it is written that Mr. Dixon "loved the low end and he would have dug this instrumentation."  There are instances throughout the album that one is reminded of Henry Threadgill's Zooid, specifically in the blend of the tuba and guitar.

But, this is most certainly the intersection of Mr. Dixon's teaching, Mr. Haynes' fertile imagination and the big ears/open minds of the musicians involved. The title track, for instance, goes from a quiet conversation between the cornet, bass and drums to a high-energy full band groove.  The musicians move from being on top of Mr. Smith's powerful drumming to playing behind the beat to exciting chatter.  A blend of African rhythms and Southeast Asian elements infuse "Mangui Fii Reek (I am Still Here)" with a lighter quality that pulls one in - pay attention to the rhythmic variations in the guitar and bass plus how the drummer accents and complements them.  "Becoming" (the longest track at 17:18) opens with the sound of air through the cornet before Morris creates a hypnotic rhythm and the rhythm section moves underneath. The textures of the marimba and moaning/shimmering guitar give Haynes room to move through the piece. As everyone contributes to the flow, the music becomes hypnotic (especially during the splendid guitar solo).

William Parker anchors the light-hearted "Crepuscular" with a repetitive yet funky bass line while the marimba dances, the tuba whistles below (yes, whistles!) and the guitar plays delightful circular phrases.  Mr. Haynes moves in and out of the mix, actually stepping out of the song for last few minutes.  he's front and center for a fiery solo on the final track "Odysseus (Lashed to the Mast)" - here, the high-energy emitted by the rhythm section spurs the soloists forward (Stapp stands out in both a supportive role and as a soloist.)

"Pomegranate" stands out for its impressive music but moreso for the the interplay of the ensemble, their commitment to the project and for how Stephen Haynes and company harness/channel the myriad influences each person brings to the performance.

For more information, go to newatlantisrecords.bandcamp.com/album/pomegranate.