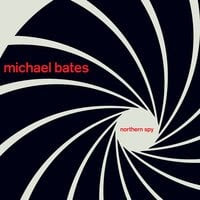 Michael Bates is one might call a "Renaissance" musician.  He's recorded music by Shostakovich, created mainstream recordings, and is co-host, with trumpeter Dave Douglas, of the Greenleaf Music podcast, "A Noise From the Deep."

Judging by the cover of his new recording, "Northern Spy" (Stereoscopic), one realizes the title relates more to his Canadian heritage (with a nod to James Bond) than to the apple of the same name. It's his third trio recording, the first being his 2004 debut "Outside Sources" and the second a 2014 date co-led with saxophonist Peter Van Huffel, "Boom Crane."  Here, he leads a group with fellow Canadian Michael Blake (tenor saxophone) and Jeremy "Bean" Clemons (drums). Right from the opening notes of "Theme for a Blind Man", it's evident this will be yet another change of direction for the bassist. This music has its roots planted in the blues  Instead of a slide guitar, there is the thick toned bass notes behind the moaning voice and the heavy breathing of the saxophone.  "Essex House" is a slow blues with Blake's swaggering tenor pushed forward by the throbbing bass and steady drums. In the quieter moments, one can hear the basic blues patterns. "An Otis Theme on Curtis Changes" gives its influences in the title and features serious "testifying" from Blake.  The very slow take of Henry Mancini's "The Days of Wine and Roses" is quite powerful as well, sad but defiant as befits the storyline of the movie.

And the trio can swing.  "Roxy" has a great groove laid down by the walking bass and the driving drums.  Blake digs in, giving his all, jumping up into the higher register of the sax every now and then. The drummer takes the spotlight on the aptly-titled "Bean", moving around the kit with abandon. His partners join on a quick set of riffs but, for the most part, Clemons is the main voice. His funky intro to the title track provides the bed for the hip-shaking bass lines and the expressive conversational sax phrases. The final track, "Neptune", picks up on the energy of that track and intensifies it even more.  Blake really lets loose yet never loses control, even as the rhythm section pushes really hard beneath him.

"Northern Spy" is an aural treat, with strong playing, heady compositions and and "in-your-face" presentation. Michael Bates has such a "deep" tone, his notes seem to grab your chest to say "pay attention" - his cohorts also give their best, making this album a tasty addition to your library. For more information, go to outsidesources.org.

Michael Oien grew up in Wisconsin in a house filled with all sorts of music. At the age of 12, he met bassist Richard David and he found his true instrument.  After graduating from the Berklee School in Boston, Oien moved to New York City in 2004, finding work with drummer Yotan Rosenbaum, saxophonists Darius Jones and Uri Gurvich plus guitarists Nir Felder and Mick Goodrich.

Now, he has a debut CD.  "And Now" (Fresh Sound New Talent) features a quintet with the "rising star" guitarist Matthew Stevens, Canadian-born pianist and composer Jamie Reynolds (husband of vocalist Melissa Stylianou),  drummer Eric Doob, and alto saxophonist Nick Videen (tenor saxophonist Travis LaPlante appears on one track). The program concentrates more on the bassist's compositions (6 originals plus the traditional "All My Trials") than on his prowess as a soloist.  To his credit, the album starts with the lovely ballad "In The Early Autumn" - he does not play his first note until after the piano introduction and the acoustic guitar reading of the theme (over 90 seconds into the song).  He's careful to make sure that one fully hears the melody before Stevens' striking solo.  Oien opens the next track, "Skol", with a forceful Mingus-like solo before Doob enters with a skipping beat.  Videen's slow alto sax lines are a smart counterpoint to the rousing rhythm section (no piano or guitar on this track). The alto solo eventually picks up steam which pushes Doob to react in kind.

The centerpiece of the album is the 3-part "Dreamer".  "Part 1" opens with bass, cymbals and alto saxophone in legato before Stevens enters with his atmospheric electric guitar chords.  The bouncing bass lines lead in "Part 2" with Reynold's piano joining in. There is a touch of Pat Metheny in the melody and chords but the pace slows for the saxophone, piano, and guitar to move around each other.  "Part 3" opens with Videen's solo over Doob's striking drum work and Reynolds' powerful chords and short phrases. After the alto sax drops away the pianist moves the song into a different mood, more contemplative, before the rhythm section picks up in intensity and Reynolds responds in kind.  Soon, Stevens joins the mix in a support mode, his phrases in sync with the alto sax pushing the piece to its climax and a soft coda.

One of the more impressive aspects of the music is how the musicians moved around inside the pieces.  "Smile This Mile" has a lovely melody played by Videen, pushed along by the rich piano chords until Reynolds steps out. He does not rush, his phrases flowing like a leaf in the wind while Doob and Oien serve as both musical and emotional counterpoint.  The alto sax solo starts in the same "mood" before going in a more playful direction, dancing around the chords and the active drums.

"And Now" close with a solo bass reading of "All My Trials" - as he does throughout the album in his supportive role, Michael Oien shows a melodic side.  One hears traces of Charlie Haden, Charles Mingus, and Dave Holland in his assertive yet tasteful journey through the piece. His debut as a leader is impactful, especially in his desire to make this a "group" effort, to showcase the work of saxophonist Nick Videen and to give both Jamie Reynolds and Matt Stevens major roles in telling his stories.  Kudos to Eric Doob in his capacity as sparkplug for the music and battery mate to the leader's rhythmic conception. Overall, a splendid introduction to the music and vision of Michael Oien.

For more information, go to michaeloien.com.

It's been nearly 4 &1/2 years since bassist/composer Sam Trapchak (born 1984, Livonia, MI) released his debut CD "Lollipopocalypse" with his quartet Put Together Funny. That group found the bassist in the company of Greg Ward (alto saxophone), Tom Chang (electric guitar), and Arthur Vint (drums).  Trapchak is set to release his 2nd CD "Land Grab" (Raw Toast Records), another quartet date with both Ward and Chang but now with Christian Coleman in the drummer's seat (and minus the group name).

What else has remained from the first effort is the impressive drive in the songs, the intelligent interactions of the musicians and the playful melodies the bassist creates for the quartet. Greg Ward impresses with his facility and bright tone, Tom Chang is both fiery and introspective, and Christian Coleman displays power and subtlety throughout.  "Lumpy's Blues" is just that, a hard-rocking blues with an odd meter and a smoking guitar solo. The leader gets to step out, displaying a big tone akin to that of Dave Holland. "Bell Curve" is a sweet ballad with classical overtones - Ward's expressive alto phrases reach into the higher registers of the alto saxophone. He has a tone not unlike Arthur Blythe in that one can hear the influence of the blues in the way he shapes his notes and how he "tells a story" in his solos. Hear how he moans in the background during the early moments of "Beautiful/Furious" eventually taking over the melody from the bass.  His solo takes its energy from Coleman's intense drumming.  Chang's fine guitar playing walks a line between jazz, rock and blues. When he lets loose over the active rhythm section on "Breathing Room" and "Pterofractal", all genres blur into his "attack mode" attitude.  Yet, his soft opening lines and continuing counterpoint on "Bell Curve" is spare yet vital to the movement of the piece. The mesmerizing back-and-forth riffing in the early part of the title track gets one's attention by creating the tension in tandem with the insistent bass note underneath the melody line played by Ward. The structure of the piece changes after the first part of the saxophone solo, picking up in intensity as the guitarist's rapid-fire phrases bob and weave in the mix. His solo near the end is refreshingly intense fueled by the drummer's insistent forward motion.

Through it all, Trapchak's bass sets the tone.  He can be percussive, his throbbing pulse freeing up Coleman to push and interact with the soloists.  His solid lines never waver, he does not step out of his foundational role  just to "show off", and is the heart of the music.  The parts he plays allow the others the freedom to move around in the structure.  When he and Coleman lock in under the saxophone solo on "Breathing Room", Trapchak's ever-changing yet steady bass lines are riveting.

The music and performances on "Land Grab" will grab you, make you sit up and pay attention, make you want to come back again and again to hear its kaleidoscope of sounds.  Sam Trapchak stands at the center of this music, his compositions and musicianship creating a joyful and adventurous listening experience.

For more information, go to samtrapchak.com.