The Firehouse 12 Spring 2015 Concert Series comes to a close this Friday June 12 with Noah Jarrett's Triage. Bassist/composer Jarrett, who is one of 2 sons from pianist Keith Jarrett's first marriage, started out playing violin at a very early but switched to electric bass by the age of 9 and acoustic bass some time later.  He graduated from the New England Conservatory of Music, all the while playing in numerous ensembles he either led or was a member of.  Triage features the bassist in the company of Jarrett Gilgore (alto saxophone) and Noah Ripley (drums).  The trio has, in the past, included tenor saxophonist Adam Niewood.  They have yet to record but have playing together a lot lately, with gigs up and down the Eastern seaboard.

Pianist and composer Leslie Pintchik has been in the studio this week recording tracks for her next release.  She's bringing her rhythm section, longtime bassist Scott Hardy and drummer Michael Sarin (Ben Allison's band, Thomas Chapin Trio, Mario Pavone) to The Side Door Jazz Club in Old Lyme.  They'll play a hefty amount of Ms. Pintchik's original music, which is quite melodic, filled with strong interplay, and flows rather than swings or rocks.  Her most recent self-released recording, "In the Nature of Things" (my review here), is quite impressive.  Her imaginative rearrangements of standards is also worth noting.

Doors open at 7:30 and the first set starts at 8:30. To find out more about the pianist and her work, go to www.lesliepintchik.com.

Bassist, composer, and label head Mimi Jones (Miriam Sullivan) leads a dynamic quartet to The Side Door on Saturday.  Ms. Jones, a native of New York City, started her musical career playing guitar but switched to cello to join the LaGuardia High school of Music and Performing Arts.  She earned a full scholarship to the Manhattan School of Music where she studied, played or came into contact with greats such as Dr. Billy Taylor, Max Roach, Barry Harris, Yusef Lateef and many others.  By this time she had switched to bass and began working on quite a regular basis.  Upon graduation, she found work in the bands of saxophonists Tia Fuller and Ravi Coltrane, pianist Luis Perdomo and so many others. Several years ago, she founded Hot Tone Music, a label that has released 6 CDs including "Balance", her 2nd recording as a leader (my review is here). O\

Joining Mimi Jones at The Side Door will be pianist Miki Hayama (who's appeared on both of Ms. Jones' CDs), Mark Shim (soprano saxophone, wind controller/synthesizer) and Hartford native Jonathan Barber (drums). You'l be impressed by the band's musicality as well as Ms. Jones' strong bass work.  The quartet hits the stage at 8:30 p.m.  For tickets and more information, go to thesidedoorjazz.com or call 860-434-0886. To find out more about the bassist and her music, go to www.mimijonesmusic.com.

Here are some hot tones from "Balance": 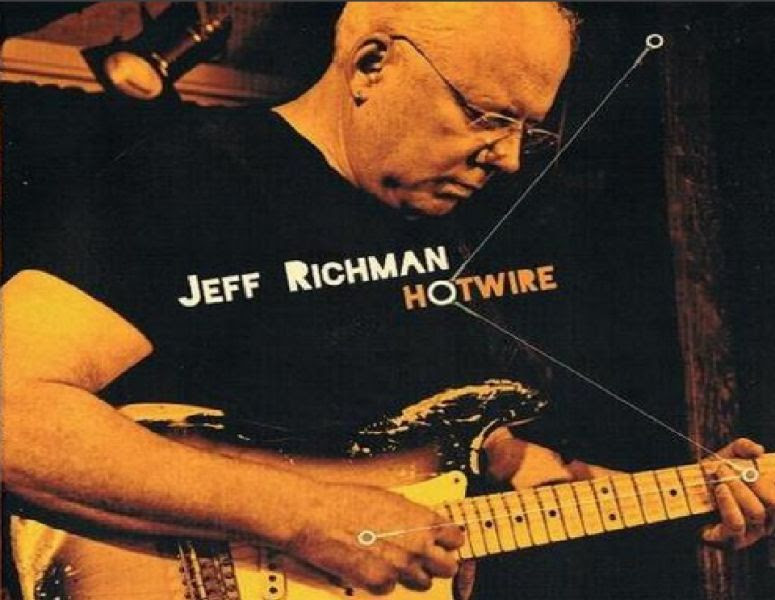 Jeff Richman, as one can see by the cover of his 16th CD as a leader, is an electric guitarist.  "Hotwire" (Nefer Records), produced by bassist Jimmy Haslip (Yellowjackets), features 9 originals and 1 cover ("Oh, Yeah?", composed by Jan Hammer and Fernando Saunders). Among the musicians on the various tracks are Vinny Colaiuta (drums), Jeff Lorber (synthesizer), Mitchel Forman (acoustic piano), Scott Kinsey (piano, keyboards), Jeff Beal (trumpet, flugelhorn), Brandon Fields (saxophones), Anthony Jackson (bass), Gary Novak (drums), George Whitty (keyboards and programming) and, on 2 tracks, guitarist Mike Stern.  To Richman's credit, when you consider all this "firepower", this is one of the most melodic fusion albums by a guitarist since Jeff Beck's "Blow By Blow" (1975).

That's not to say Richman does not display his formidable technique but he seems to be more interested in keeping your attention on the song. Pieces such as the funky "Seven Up" dance along merrily (in this instance atop Colaiuta's drums and the producer's thick bass lines) with the Fields and Beal providing acting as the horn section. Beal rocks out n flugelhorn on "Golden Arrow", acting as a strong solo voice to offset the guitar. Forman's handsome piano introduction on the ballad "One Last Kiss" sets up the emotionally rich melody line.  Scott Kinsey's "space" synth sounds lead the way into "Solar City" which then is powered by the melodic bass and powerful drums (here it's Haslip and Hungarian-born drummer Gergo Borlai in his only appearance). Anthony Jackson and Gary Novak make up the rhythm section for "North Shore", a powerful piece with a lovely solo acoustic piano intro by Gary Fukashima.  Here, the guitar melody is shadowed by the wordless vocals of Josefine Löfgren and she supplies an angelic voice beneath the fiery guitar solo.

One cannot help but hear the Jeff Beck influence in Richman's lines (although he's not as enamored of the whammy bar as the great British guitarist is) and in his intelligent use of volume.  His tone is truly big, similar at times to a trumpet, and he can really rip (check out the Hammer/Saunders to hear him let loose). Yet, each time I listen, it's easy to get past the Beck connection and enjoy the songs.  This music does not sound "phoned in" nor do the pieces seem an excuse for a "blowing session". "Hotwire" is indeed hot stuff - Jeff Richman sounds great throughout but, for this listener, it is his compositions that are the most impressive aspect of this recording.

At this moment, jeffrichman.net seems to be inaccessible. So, you can get more information and listen to most of his recordings by going to jeffrichman.bandcamp.com.

Here's a delightful taste of Mr. Richman and company: