Ryan Truesdell has been mining the Gil Evans archives for the past 6 or 7 years, uncovering arrangements and sketches that stretch back to the days that the ever-searching Evans was pushing the members of the Claude Thornhill Orchestra to create colors that fused many genres of music.

In 2011, Truesdell partnered with ArtistShare to raise money to record a number of these arrangements with a large ensemble, dubbed the Gil Evans Project, to celebrate the arranger's 100th birthday. The ensemble, many of whom also work in Maria Schneider's Orchestra, played some gigs and went into the studio, producing 2012's "Centennial."  The results were exhilarating and the reactions quite positive. Best of all, Truesdell was able to arrange for more live dates and a yearly week-long residency at the Jazz Standard in New York City.

In conversation with Truesdell, he said he had collected enough arrangements to play up to 6 different shows with the GEP, including all of Evans's collaborations with Miles Davis from Columbia Records.  For the May 2014 weeks at Jazz Standard, the ensemble's book had 42 pieces!  By the time the 20+ band hit the small stage, Truesdell had also decided the next recording would be a live one.  The results, one of the first albums released in ArtistShare's partnership with Blue Note Records, is "Lines of Color: Gil Evans Project Live at Jazz Standard" and it's a veritable treasure trove of great performances.  While the 2012 CD had 3 tracks over 11 minutes (including a medley that ran over 19 minutes), the new CD has only 3 over 7 minutes.  A number of the shorter pieces come from Evans' work with the Thornhill Orchestra, including the swinging "Avalon Town" (composed by Grant Clarke and Nacio Herb Brown) which has 7 solos in just over 4 minutes.  The lovely ballad "Can't We Talk It Over" features a sweet vocal by Wendy Gilles who also shines on the happy blues of "Sunday Drivin'" and on the "Everything Happens To Me" section of the "Easy Living Medley."

Other highlights include the fun "Gypsy Jump" and its formal trumpet fanfare before the band steps into a jumping rhythm (there are several musical phrases that have an Eastern European/Klezmer sound).  Kudos to the rhythm section of Jay Anderson (bass) and Lewis Nash (drums) who both anchor and drive the music plus the Freddie Green guitar comping of James Chirillo and the tinkling piano of Frank Kimbrough. Listen for the playful clarinets of Steve Wilson and Scott Robinson (bass clarinet) during the opening section of  "How High The Moon" which features short and o-so-sweet solos from Kimbrough, Dave Pietro (alto saxophone), Ryan Keberle (trombone) and Donny McCaslin (tenor saxophone). John Lewis's "Concorde" is a real toe-tapper, the boppish melody jumping stop Nash's great drum work. Strong solos from Greg Gisbert (trumpet), bassist Anderson, saxophonist Pietro and violist Lois Martin help the cut stand out.

As I write this, the second track in the program, Bix Beiderbecke's "Davenport Blues", is playing. Evans recorded the piece in 1959 with Johnny Coles on trumpet.  Here, the lead belongs to Mat Jodrell and he absolutely knocks it out of the park.  His second solo, right after Frank Kimbrough's busy interlude, brings the crowd to its feet right from the opening note.  The joyous New Orleans street music section, played by trombone, trumpet, tuba and soprano sax over the rhythm section, is a real treat, recorded here for the first time ever.

"Lines of Color" is a wonderful reminder of the great work Gil Evans produced over the 4+ decades of his career. The music does not sound dated but alive, an excellent reminder that jazz is a living and ever-evolving art form and that it can be fun!  Kudos to all involved, especially Ryan Truesdell.  For more information, go to www.ryantruesdell.com.

Enjoy "Gypsy Jump" by clicking on the link below: 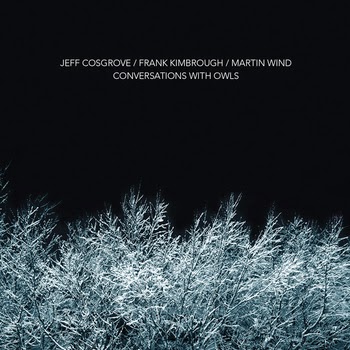 One gets the feeling that this session is also mostly improvised, even the "standards."  Kimbrough opens George Gershwin's "I Loves You Porgy" alone.  You have to strain to hear when the bass comes in as well as the whisper-soft brush work of Cosgrove. There are few pianists who frame a melody in the manner of Kimbrough, making sure the listener recognizes the familiar strains but also examining different emotions as he moves through the song.  A sense of mystery surrounds "Stacks of Stars", especially in the bass opening. Strummed chords, cymbal splashes, and then the piano enters and the music takes on an urgency not unlike a hard rock song but with the energy of Ellington-Roach-Mingus in "Money Jungle."  Wind's wild arco groans and odd cries fill the soundscape of "Forest Hunters" until halfway through when the trio begin a journey that feels as if they are falling forward.  Cosgrove creates a handsome melodic drum solo at the onset of "Excitable Voices."  Once the bass and piano enter, the music picks up speed with melodic fragments careering about.  The piece also ends with a drum solo and a quick trio coda, a softer reading of the melody."The Shimmers" opens quietly but soon the pianist eggs his rhythm section on with a chordal melody. Here, the music may remind some of early Ornette Coleman with its free-wheeling phrases.

A air of mystery hangs around the 6th track until you pick the familiar melody of "My Favorite Things" and then the music begins to move away from it again, as if one was in a car rushing towards a city. Nothing seems familiar until you recognize a building or a friend. You don't stop or even slow down, just move away towards your destination.  Here, the melody serves as a touchstone - it's there for a moment but the musicians are already moving forward.

One can easily get lost in these "Conversations With Owls".  The musical interplay, the power of improvisation built upon trust, the seemingly unconscious choice to move in and out of "free" time, the intelligent use of dynamics, all work to engage the listener.  Jeff Cosgrove, Frank Kimbrough and Martin Wind have created an album which draws one back again and again, back to get lost in its mysterious beauty.

Here's one of the "Conversations":