The first CD from the quartet known as Old Time Musketry came out in the Fall of 2012 (my review here) on the Steeplechase subsidiary Look Out!  The music was and remans so enjoyable, a pleasing blend of folk and jazz, with material that suggests what The Band might have sounded like had they played jazz. OTM - Adam Schneit (saxophone, clarinet), JP Schlegelmilch (piano, accordion), Phil Rowan (bass) and Max Goldman (drums, melodica, tambourine) - have myriad influences; what's even better about their 2nd CD, "Drifter" (NCM East), is how much more seamlessly those influences are woven into the fabric of the music.

Listen to how the accordion walks in on the title track (composed by Schlegelmilch, who contributed 7 of the 9 songs) atop the pinging cymbal and throbbing floor tom before joining the tenor saxophone on a mesmerizing melody that has the feel of a "pop" song - it is as inviting as a cool breeze on a hot day.  Goldman's drums have a dancing feel while Rowan's bass keeps elegant time. In contrast, "February March" opens on a martial beat before the saxophone and piano head into "freer" territory although the rhythm section never really lets go of the march.  Bass and accordion introduce the melody on "Odd Ray" with the drums and tenor keeping time before Schneit and Rowan switch roles for the theme.  Throughout the track, the soloists move in and out of the spotlight while Goldman (who is also works with the Danny Fox Trio) maintains a sprightly beat a la Ed Blackwell. "Pastoral" has a classical feel in the opening clarinet-accordion introduction before moving into a more exotic setting.  Schlegelmilch's accordion work has a touch of Guy Klucevsek in it and, on this track, Schneit's clarinet reminds this listener of Jimmy Giuffre.  The Klucevsek sound is also noticeable on "Two Painters", the handsome chords and single note melody moving into a tenor-accordion unison duet while the rhythm section romps beneath. Again, there is a "free" feel to this track without the band veering off into noise.  The high energy introduction to "Transmitter Park" leads to a raucous tenor solo over pulsating rhythms and great counterpoint from Rowan -  the bassist gets to solo and his tendency towards melody (as opposed to "flash") serves him in good stead.  Rowan also gets the spotlight on Schneit's "The Turtle Speaks", an easy waltz with the surprise of horn section (trombonist Brian Drye) behind the tenor solo.  "Weird Waltz" is a dash of Kurt Weill-inspired jollity that manages to pack a lot of music into 1:43.

"Drifter" gives off the feel of a band in total control of their sound, 4 musicians playing to each other's strength with confidence and spirit. Old Time Musketry makes music that can soothe a listener yet also pokes at one's expectations. There is intimacy in the interactions, freedom in the execution, and plenty of melody to grab your attention.

For more information, go to oldtimemusketry.com.  Give a listen to the title track:

"Belleville Project" (Sunnyside Records) is the trans-Atlantic project of Jeremy Udden (alto saxophone, pump organ, Prophet 5 synth) and Nicolas Moreaux (bass, toy piano). They first met in 2012 and knew from the music they heard each other produce that they shared a number of basic principles and stylistic choices. Thanks to grants from the French-American Jazz Exchange, the Mid-Atlantic Arts Foundation, and several others, the two organized a band to record music that has its roots in Americana, French folk music, cinema music and jazz and recorded in the Belleville section of Paris.  Joining them is British-based tenor saxophonist Robert Stillman (who also plays piano and pump organ), Pierre Perchaud (acoustic & electric guitars, banjo) and RJ Miller (drums) plus Pete Rende (keyboards, synths and mixing engineer). If you know Udden's "Plainville" music (which he describes as "jazz meets Neil Young"), that gives you a good idea of what to expect from 4 pieces he contributes to the recording.  But, there are also several surprises.  "Belleville" hits hard from the opening alto sax-drums duet although the melody line is still quite handsome.  The solo section is, basically, trio (sax, bass and drums) and, thanks to Miller's forceful drumming and Moreaux's active  bass lines, has a real jazz feel.  The co-leaders each write a song dedicated to their partner. The bassist's "Jeremy" moves quite slowly, as if walking through fog. The theme section features Neil Young-like guitar strumming and fresh saxophone counterpoint but no solos.  Meanwhile, Udden's "Nico" has moments when the guitar part and drums sound right out out a late-1950s "rock" ballad - the solos are gentle and the piece rolls along on an easy rhythm.

Stillman, who runs his own label known as Archaic Future Recordings, contributes the minimalist "Epilogue" (odd name for the 5th out 10 tunes). It's a quiet tune, with a wistful feel, soft brush work and the 2 saxes playing the theme over a ripple guitar and elemental bass work.  The song does fit its name.

Moreaux's 5 pieces range from "Jeremy" (mentioned above) to the easy swing of "11", pushed along by the uncomplicated brush work of Miller; it features a fine solo from Perchaud (on electric guitar) plus interwoven saxophone lines.  The bassist gets the final 3 cuts, all short, starting with the atmospheric "I'm 39" (2:25) which features an impressive drum solo.  Moreau's toy piano introduces the theme of the next track, "Albert's Place" and plays it all the way through, supported by acoustic guitar and pump organ.  The program ends on a raucous note with "Healing Process", replete with pounding drums, a "wailing" guitar solo and circular lines for the supporting saxophones.

Jeremy Udden and Nicolas Moreaux hit musical pay dirt with "Belleville Project."  The 10 tracks barely reach 40 minutes and there's no waste but also few solos.  Jazz fans may be a bit put off by the last fact but this music contains many rewarding moments and enjoyable melodies. For more information, go to www.musicbelleville.com/about-ba/. 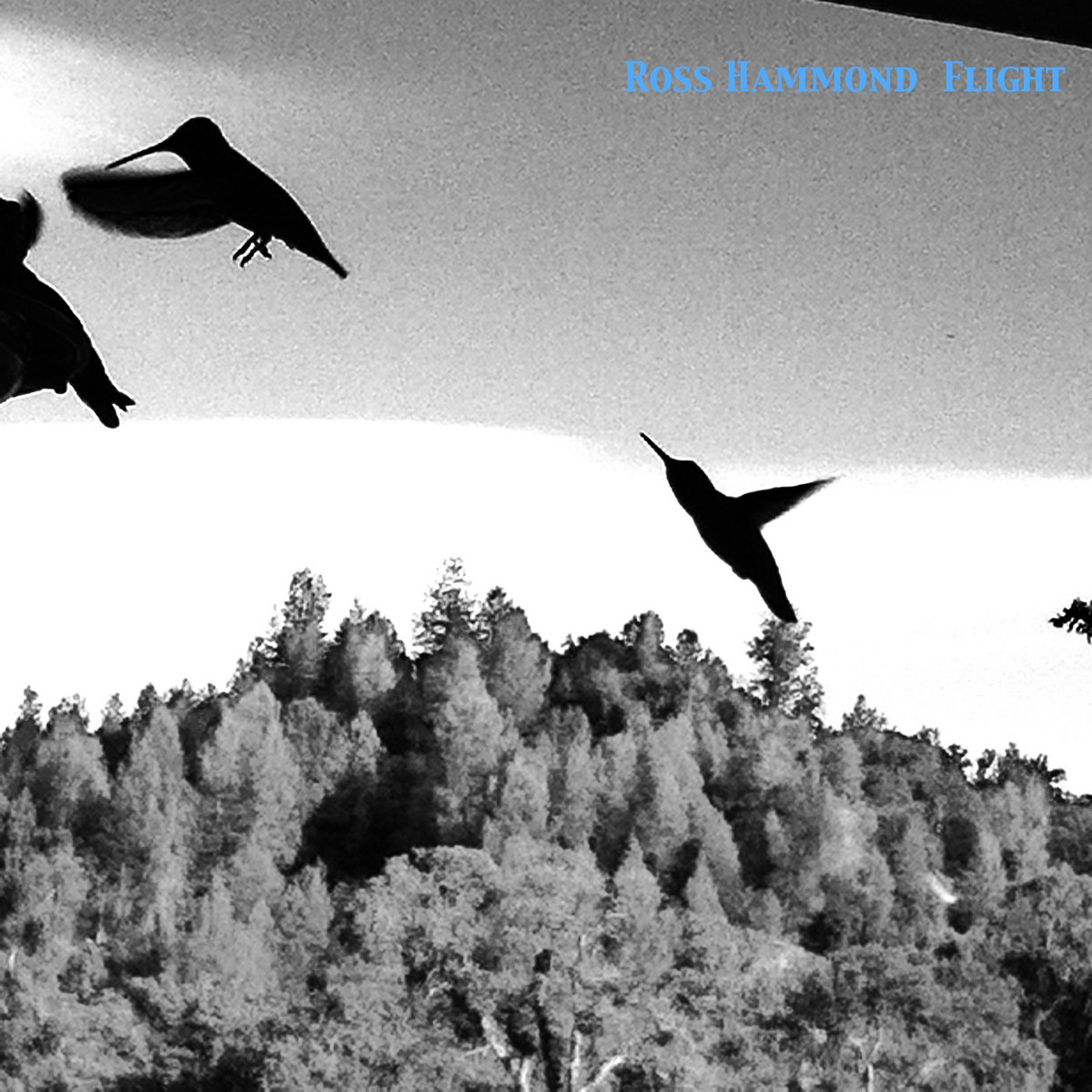 Guitarist Ross Hammond, owner and operator of Prescott Records, has released 11 CDs over the past decade, albums that featured trios, quartets, a smashing duo with drummer Grant Calvin Weston, and a live Sextet recording. Most of the tracks featured the California resident on electric guitar. His 12th release is called "Flight"; it's all acoustic guitar, either 6-string, 12-string or "resophonic" guitar.  On initial listening, it may remind some of the work of John Fahey and Leo Kottke. Hammond, whose previous releases had a jazz bent, sticks to a folk-blues program and the music is highly listenable and quite personal. The 15-song disk includes 4 traditional pieces (including "Nobody Knows the Trouble I've Seen" and "On The Rock Where Moses Stood"), 10 originals and an inventive arrangement of "You Are My Sunshine."

The music feels deeply personal - you could argue that all "solo" instrumental is personal but I believe a listener can tell when an artist is just "showing off" or truly involved in his/her art. The pieces were recorded live both inside and outside Hammond's home and in various spots around California.  If you listen clearly to the original "The Jellyfish Reached the End of the Journey", you'll hear birds singing behind his slide guitar. There are voices heard throughout "When The Cows Face the Same Direction" that indicate the guitarist's family is close by; they don't distract or detract from the poignancy of the melody, just illustrate the "home-made quality of the production. "The Praying Mantis" sounds as if it was recorded outside as well - there's a certain sonic quality, might even be cars going by his location, that's different than from, for instance, "...Sunshine", where it sounds and feels if the listener is sitting right next to the guitarist in his room. Throughout the program, there are moments that capture your ear.  For instance, near the close of of the traditional spiritual "Deep River", Hammond plays 3 ringing notes (harmonics) that surprise and please. The richness of his 12-string guitar tone on "Womuts" resonates out of the speakers, like a blanket of sound sent to give comfort.

"Flight" could easily get lost in the flurry of new recordings but do give this music your attention. Ross Hammond has created a program that takes you out away from the craziness of every-day life; this is music that, ultimately and intimately, soothes the soul, an instrumental salve for your trying times.

For more information, go to www.rosshammond.com.