Bassist Eric Revis is one of the busiest musicians in the world.  As I write this (7/08/13), he's on tour in Europe with both the Branford Marsalis Quartet and the Kurt Rosenwinkel New Quartet. He's also a charter member of the Tarbaby trio with Orrin Evans and Nasheet Waits making him a charter member of the LIKEMIND Collective as well (Part 1 is here).

"City of Asylum" (Clean Feed Records) share its name with a Community Arts Organization in Pittsburgh, PA (www.cityofasylumpittsburgh.org/).  It's Revis's 4th CD as a leader and features drum master Andrew Cyrille (born 1939) and the impressive young pianist Kris Davis.  The bassist brought the musicians together and they created the program on this CD.  Composed of 7 group improvisations and one piece each from Thelonious Monk ("Gallop's Gallop"), Keith Jarrett ("Prayer"), and Revis's "Question", the music is alive with interaction, possibilities, ideas and quite far from cliche.  The bassist has a "large" tone that blends well with Mr. Cyrille's fluid percussion.  Ms. Davis is one of the stronger improvisers in modern music, her ability to move in and out of the flow of the music, her striking choice of chords and melodic phrases, her percussive attack, all keep the listener on the edge of his seat (physically and mentally).  There is nothing "standard" about her approach (you can say the same about  Messrs. Cyrille and Revis as well) so these pieces feel "alive".  There are tens of thousands of covers of Monk tunes but few with the animation that this Trio imbues the song with.  Mr. Cyrille creates a wall of percussion while the bassist, more often than not, plays counterpoint.  The give-and-take of the bass and drums in the opening moments of "For Bill" is a fine example of how both musicians set up the dialogue and lay the table for Ms. Davis. She reacts to as well as acts on what her partners are creating. This piece is so quiet, at times, one must lean into the speakers, yet Mr. Cyrille never relinquishes the beat - in fact, he sets the level of intensity for the others.

This music is neither heartless nor humorless.  Witness "Harry Partch Laments the Dying of the Moon...and Then Laughs" - with Ms. Davis creating a "motor-rhythm" and Mr. Cyrille pushing an prodding beneath, the bassist creates a mysterious sound as he bows throughout the track.  Revis sets a furious pace on his unaccompanied opening to "Prayer" and, when the drummer enters, one can hear the musicians "conversing".  Ms. Davis plays with slowing down the piece, creating a solo that rises with the bass in pursuit. The lovely melody line the pianist creates on "Traylor"is reminiscent of Paul Simon's "An American Tune" - the drummer frames the piano beautifully with his cymbals and sparse use of the snare drum while the bassist creates a melody that moves in tandem with the piano.

"City of Asylum" is filled with with riches, a group conversation that is open and intimate. One can sense that as Kris Davis, Andrew Cyrille and Eric Revis continue to explore this collaboration, their interactions will become ever more expansive.  This CD is excellent yet one must see them live to complete the connection between musician, music and listener.  For more information, go to ericrevis.com or www.cleanfeed-records.com/disco2US.asp?intID=430. 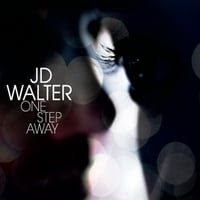 Vocalist JD Walter is no stranger to experimentation, to taking chances in pursuit of creativity. He has recorded with saxophonist Dave Liebman, his 2006 CD "2Bass, A Face and Some Skin" found him in a session with 2 bassists and a drummer, and has co-led the group Luvpark with pianist Orrin Evans.  For the past 5 years, he's been issuing CDs on his own JWALREC label, including live recordings from Portugal.  "One Step Away" is his latest (ad)venture and he turned over the reins of the production to Evans and bassist Eric Revis.  Their choice was to record "live" in the studio utilizing Tarbaby (Evans, Revis and drummer Nasheet Waits) and guitarist Marc Ducret (who will be featured along with saxophonist Oliver Lake in the upcoming Tarbaby Rogue Art recording "Fanon").  The result is a fascinating blend of free improvisation, handsome ballads, inspired "instant" arrangements and smart choices of cover material.

Walter, who grew up in the Philadelphia, PA area, was most certainly aware of Todd Rundgren (who rose out of the Philly area to stardom) - he picks a Rundgren tune from his "A Capella" album, the soulful ballad "Pretending To Care."  The band beneath the emotion-filled voice moves ever-so-slowly with Evans playing a sweet piano accompaniment atop Waits' deliberate brush work. Ducret's guitar solo moans, exhales, flutters and roars even as Walter returns to bring the song to its climax.  Next is a rollicking rendition of Paul Simon's "50 Ways to Leave Your Lover." After Walter sings the opening verse (with Evans supplying some abstract counterpoint), the rhythm section comes in and the song drops into a raucous groove, Waits' mammoth bass drum leading the way with Revis weaving lines in and around the vocalist.  Evans' piano solo is a hard-edged forceful statement.  Walter has a great playing with the time, moving in and out of falsetto and getting into the "spirit."

Guitarist Marvin Sewell joins the band for the modern soul sounding of "If I Knew", a smooth blend of r'n'b, the "Philly Soul" sound of Thom Bell, and jazz. Walter bounces atop the band, overdubbing voices on the chorus, and truly digging into the words.

Several of the songs have an experimental edge, including the sensuous rhythmical treat that is "How To Die and Where To Fly." Walter duets with himself with Revis providing a funky bass figure and Waits supplying a very strong groove. "Inward" is just Ducret's electric guitar as accompaniment for the socially conscious lyric.  Walter's voice moves gracefully alongside the guitar, the articulated lyrics standing out as does the creative lines the guitarist supplies. The blues feel of "It's Raining Today" is juxtaposed with an electronic drone and Evans' dancing piano lines (only on the first verse) - the song has a fascinating bridge before returning to the feel and sounds of the first half of the piece.

The sound of "One Step Away" is wonderfully open (save for the tune with the drone); all voices instrumental and human can be heard with Nasheet Waits' drums right in the center of the mix and JD Walter usually on top of the band (the sole exception being "How To Die and Where To Fly" where the 2 voices are separated.)  After several times through the program, what might sound "strange" first time through loses that definition and one realizes how well these sounds mesh together.  JD Walter may have been challenged by the approach of his good friend and co-producer Orrin Evans but the results are exceptional.  Dig in and dig it!  For more information, go to www.jdwalter.com.
Posted by Richard B. Kamins at 9:43 AM