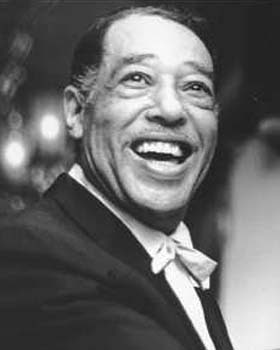 Everybody interprets "independence" differently; perhaps, a better word would be "understand." The United States is a "land of liberty", of democracy yet, as we all know, freedom comes with sacrifice.  We are certainly "free to be you and me" but sometimes one is amazed how some freedoms that we take for granted have to be legislated (for example, voting the right to vote.)

It is often said or written that Black American Music, jazz to many, is this country's contribution to the world.  Born from the foundation of the blues, this is a music that has both communal and individual properties.  There are borders, limitations if you will, but it is often amazing how much the creative person can do within the framework of this music.

The 20th Century is considered the "American Century", music is one of America's prime contributions to the world, and Edward Kennedy "Duke" Ellington (1899 - 1974) is one of the greatest of the contributors.  His music, fermented in the Black Renaissance of the 1920s, became part of the soundtrack in the Depression years and remains so to this day.   When one ruminates on the development of American music, people such as Louis Armstrong, Thelonious Monk, George Gershwin, Cole Porter, Irving Berlin, Charles Ives, Leonard Bernstein, Aaron Copland and others created much of the memorable sounds - however, none of them sustained the creative level of Mr. Ellington (it is an arguable point but, bear with me.) Thanks to the royalties of his great songs, he kept his Orchestra together through good and bad economic times.  He composed numerous "suites" and concert-length pieces, toured incessantly, set the example for numerous bandleaders of how to comport one's self on the stage and in the world, and was a fine pianist.  Don't believe me? Go to www.dukeellington.com/ and see/hear for yourself.

Eddie Daniels (clarinet, tenor saxophone) and Roger Kellaway (piano, arrangements) are a potent pair of musicians.  Both extremely talented and technically proficient, every time they perform together, creative sparks fly.  "Duke at The Roadhouse: Live in Santa Fe" is their 3rd CD for IPO Recordings; dedicated to the music of Ellington  (with 1 original piece by each performer), this program will make you smile and clap your hands with glee.  One would have to be a grump to dislike the sounds that the duo make over the course of this 10-song program.  The songs are all Ellington "standards" but there is nothing standard about the interpretations.  Kellaway (born in 1939) is a splendid player - at times, he reminds of the late Jaki Byard in that he can play anything in any style but never abandons the rhythm (there are numerous examples on the CD where he breaks into a "stride" pattern - Byard loved to do that as well.)  Daniels suggested that the duo add cello to the arrangements so Kellaway chose cellist James Holland of Albuquerque, New Mexico, to join them. He appears on 4 of the pieces - Kellaway wrote both the arrangements and the solos for the cellist. Holland's clear tones and deep notes are a pleasing addition to pieces such as "In a Mellow Tone" where he is paired with Daniels playing tenor as well as on the slyly rambunctious performance of "Perdido." "In a Sentimental Mood" has a subtle Brazilian feel at times.  Daniels' solo is a treat while the cellist gets to romp over the piano ever-shifting under-pinning.  Kellaway's " Duke in Ojai" has a wonderful melody line played in unison by cello and clarinet with a Daniels solo that leaps gloriously into the higher ranges of his instrument.

Daniels' clarinet work is absolutely joyous, from the bluesy slide into "I'm Beginning To See The Light" to his Charlie Christian-like melody lines on his original "Duke at The Roadhouse." His unaccompanied introduction to "Mood Indigo" includes a bit of multi-phonics while his solo on "Creole Love Call" is the essence of the blues and how one can really stretch out within that form.

The playful reading of "It Don't Mean a Thing" brings the CD to a close with a flourish...actually several flourishes. The music that Eddie Daniels and Roger Kellaway make, along with the contributions of James Holland, speaks to the vitality of Duke Ellington as well as to the individual and communal aspects of this American art form.  Yes, it is "Art" but it is life at its finest. "Duke at The Roadhouse: Live in Santa Fe" will reverberate in your mind and soul long after the last explosion of the fireworks on this and every Independence Day.  For more information, go to www.iporecordings.com.
Posted by Richard B. Kamins at 9:07 AM