The Poetry of Musical Pros

Clarinetist/alto saxophonist Paquito D'Rivera is a proud Cuban-American.  Proud of his heritage, D'Rivera has championed music from his native land for nearly 4 decades. North Americans first heard his music when he and pianist Chucho Valdes brought their group Irakere first to festivals in Europe in 1977 and then, in 1980, to the Newport Jazz Festival in New York City. D'Rivera defected to the States the same year and trumpeter Arturo Sandoval came in 1981.

Over the years, D'Rivera has also displayed a deep connection to the music of Brazil, an attraction that started when he would go to the movies and hear the great sounds of the percussion plus the beautiful dancers.  He has recorded numerous CDs with Brazilian music but never one that featured him with all Brazilian musicians.  That is, not until his "regular" pianist, Alex Brown, told him that Trio Corrente was his "go-to" group for contemporary music from the South American country.

In October of 2012, Paquito D'Rivera traveled to Sao Paulo, Brazil, and recorded "Song For Maura" his 3rd release for Paquito Records/Sunnyside Records. Trio Corrente - pianist and arranger Fabio Torres, acoustic bassist Paulo Paulelli and drummer Edu Ribeiro - recorded its debut CD in 2005 and are considered by many writers in and outside of Brazil to be among the best ensembles the country has produced in the past 25 years.  With the help of the pianist, D'Rivera has crafted a program that looks to the past and to the present for its inspiration.  One gets a lovely reading of "Tem Do" composed by Baden Powell and Vinicius De Moraes as well as a hard driving version (the leader on alto sax) of "Ceu E Mar", a classic work of Johnny Alf (1929-2010) plus a bouncy reading of "Um a Zero" (here titled "1 x 0") from the prolific pen of Pixinguinha (1897-1973). Claudio Roditi (born 1946) is represented with his rollicking "Recife Blues" that includes a hyper-active rhythm section and forceful solos from Rivera (alto sax), Torres, a sparkling romp from Paulelli and a hearty yet fun romp from Ribeiro.

Drummer Ribeiro, along with guitarist Chico Pinheiro, composed the sprightly "Cebelo No Frevo" which features a snappy melody line played in unison by the piano and alto sax. The drums sets a frantic pace and, along with the booming low notes of bassist Paulelli plus his strong counterpoint, make this performance irresistible. Pianist Torres contributed 2 pieces, the sensuous mid-tempo "Paquito" in which the clarinet melody is quite handsome; the multi-sectioned composition features a sparkling piano solo plus the final track, "Saidera", that Rivera sits out.   That cut has a multi-national feel, blending Brazilian elements with jazz.  The title track is Rivera's only contribution - it's a lovely ballad with elements of Billy Strayhorn and Carole King (the opening section sounds like the chord progression to Ms. King's "It's Too Late.")  The leader's clarinet work is, at the start, lilting but picks up in intensity for his solo.

Paquito D'Rivera sounds as if he had a blast recording "Song For Maura" - you can hear the joy in his interplay with Trio Corrente.  Only 2 of the tracks exceed 5 minutes yet nothing seems rushed (not even the uptempo romps) and the musicianship is positively top-notch.  The results are "esplêndido", indeed! 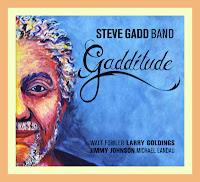 Chances are good that even if you do not pay attention to liner notes or discographies, you have heard Steve Gadd. His list of sideman credits ranges from Steely Dan ("Aja") to Paul Simon (who can forget "50 Ways To Leave Your Lover" or "Late in the Evening") to  Eric Clapton to Chuck Mangione to James Taylor to Al Jarreau to...you get the idea.  In the 80s, he lead the Gadd Gang that released several recordings and, in 2011, formed The Gaddabouts with vocalist Edie Brickell, bassist Pino Palladino and guitarist Andy Fairweather-Low. They have released 2 critically acclaimed CDs.  In 2010, he recorded with organist Joey DeFrancesco, baritone saxophonist Ronnie Cuber and guitarist Paul Bollenbeck under the monicker Steve Gadd & Friends.

2013 brings about the Steve Gadd Band, a quintet with Walt Fowler (trumpet, flugelhorn), Larry Goldings (organ, piano), Michael Landau (guitars) and Jimmy Johnson (electric bass). Their debut CD, "Gadditude" (BFM Music), is like your favorite shirt or sneakers, like a glass of mature red wine, a sweet concoction of melodies that feels so good whether you're in the car on the highway or in your backyard.  Goldings and Landau each contributed 2 compositions, there are 2 Keith Jarrett pieces, one each from Abdullah Ibrahim and Radiohead plus a group piece titled "Green Foam."  That track starts out like the blues classic "Good Morning Little School Girl", features a splendid organ solo that quotes "Green Onions", then drops into a "deep blues" groove for a rippling guitar solo and goes a bit "out" near the close for Fowler's solo.  The quintet plays a soulful, bouncy, version of Jarrett's "The Windup" - Johnson plays a most wicked bass groove and Gadd gives the rhythm a Caribbean feel.  Landau's solo has a country feel as does Gadd's snappy snare work while Fowler digs right in.  Goldings, on organ, has a great time riding the groove and the way the group slides back into the theme is quite sweet.  The Radiohead track, "Scatterbrain" (from "Hail to the Thief") is a good vehicle for Fowler's atmospheric flugelhorn - the track also features quiet background vocals from Arnold McCuller and David Lasley. That duo of studio standouts are buried in the mix (if they are there at all) of the other Jarrett tune, "Country" (from his "My Song" Lp of 1978 - interesting that both tunes Gadd covers are from Jarrett's Scandinavian group of Jan Garbarek, Palle Danielson and Jon Christensen). The group's version of Ibrahim's "The Mountain" sounds as like a track by Otis Redding - if you go back to listen to the original (that the South African pianist first performed with is group Ekaya in the 1980s) , it has the same soulful feel.

The originals each have their strong points.  "Africa", Landau's piece that opens the program, has an excellent guitar solo and strong organ accompaniment while his other contribution, "Who Knows Blues" takes the blues to New Orleans and filters it through the grooves of The Meters. Gadd knows just how to push a piece without overplaying. The bubbly organ fills and Johnson's active bass lines are pleasing accompaniment.   Golding's "Ask Me" is an atmospheric ballad with a fine electric piano solo, an emotional flugelhorn solo and strong work from both the drummer and bassist as they float beneath the soloists.  The keyboard player's other original, "Cavaliero", sounds like it could have appeared on Los Lobos "Kiko" recording.  Perhaps it's Gadd's snappy drumming or Landau's crunchy guitar but the piece really catches the ear.

Steve Gadd has developed quite a "Gattitude" and it's one with real sweet grooves and fine playing throughout from all participants.  The music doesn't jump right out at you but sneaks right into your ears. Soulful, bluesy, and fun, the Steve Gadd Band strikes just the right chords.  For more information, go to www.bfmjazz.com.