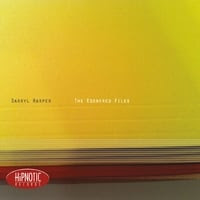 Thanks to musicians such as Don Byron, Anat Cohen, Ken Peplowski, Eddie Daniels, Ben Goldberg, the clarinet, while not as visible as the tenor saxophone, continues to be an important voice in creative music.  Add to the list Philadelphia native Darryl Harper. For nearly 2 decades, he has worked with his Onus Trio and Quintet, as a solo artist, working with Regina Carter, the C3 Project (for 4 clarinets, voice and rhythm section) and is on the faculty of Virginia Commonwealth University.  His 2009 CD, "Stories In Real Time" (HiPNOTIC Records), was a fascinating document that featured commissioned works for different sized ensembles.

His new recording, "The Edenfred Files" (also on HiPNOTIC), takes its name from a 2-week Edenfred Artist Residency at the University of Wisconsin/Madison.  While in attendance, Harper worked on 2 different projects, The Onus trio featuring bassist Matthew Parrish and drummer Harry "Butch" Reed plus the Into Something duo featuring pianist Kevin Harris. The program includes 4 pieces for the trio and 3 for the duo with Harper on clarinet in both settings.  Pianist Harris, whose latest CD really impressed me (read my review here), is a fine partner. Harper's "Spindleshanks" is a playful piece with a sassy blues feel while "Walking With Old Souls" is quieter, influenced by South Indian Classical music (from the Carnatic tradition).  Harper plays melody throughout while Harris provides the drone-feel with his left hand and melodic interpretations with his right.  The pianist gets the final track all to himself, a striking reading of John Coltrane's "After the Rain" that has the feel of a work by Debussy (save for the little gospel riffs at the opening and closing.)

The Trio show similar range, starting with "Jerry's Blues", a waltz composed by fellow clarinetist Vickie Wiseblatt that swings pleasantly.  Bassist Parish contributes "Sirens Calling", a work that has its roots firmly planted in Africa. The sounds of the drums and clarinet swirl around as the bassist serves as the melodic foundation.  The drums drop out in the middle and bowed bass takes over, slowing the work down for a time but the infectious returns to take the piece out.  Reed's drums lead the trio into "Edenfred", an up-tempo blues that has great drive and interplay.  Harper adapts Julius Hemphill's "Kansas City Line", a work that the late saxophonist/composer created for his 1977 "Blue Boye" solo project (reissued in 2002 on Tim Berne's Screwgun label and still available) for trio. The clarinetist  captures the bluesy joy of the original, giving the rhythm section space to stretch.

Darryl Harper has created yet another impressive project. "The Edenfred Files" flies by at just under 41 minutes, making one wish for more from both the trio and duo.  Music that tells stories is almost always worth investigating and these stories are quite compelling.  For more information, go to www.darrylharperjazz.com. 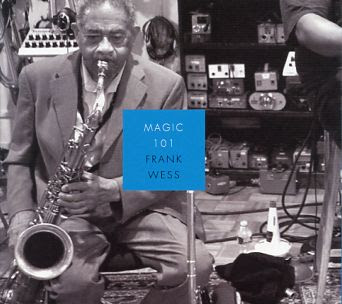 Saxophonist/flautist Frank Wess began playing saxophone at the age of 10 in his hometown of Kansas City, Missouri.  The year was 1932 and the United States was in the midst of the Great Depression.  By the end of that decade, he had moved to Washington, D.C., was playing both alto and tenor saxophone, beginning to play with "serious" bands.  He spent World War II in the US Army Band and, after his discharge, began his career in earnest, working with Billy Eckstine, Lucky Millinder and others.  He took up the flute in 1949 and joined the Count Basie Orchestra in 1953, where he stayed for 11 years.  Since 1964, Mr. Wess had done studio work, led several aggregations, worked with his Basie section-mate Frank Foster, and played all over the world.  At the age of 91, he still has several gigs a month.

"Magic 101" (IPO Recordings) was recorded in June of 2011 (when he was but 89) and features Mr. Wess in a quartet with Kenny Barron (piano), Kenny Davis (bass) and Winard Harper (drums).   With the exception of the opening track, "Say It Isn't So", this is a ballad recording.  The joy of an album is you can't hear how old somehow is when he or she is playing an instrument;  you can hear "maturity" and Mr. Wess is in fine form.  For these 7 songs, he sticks to tenor saxophone.  His first duet with Barron, "Pretty Lady", is the only original, has a lovely, long, melody line;  both men play sparkling solos, Barron with a touch of stride in his left hand, Wess's breathy tone imbuing his solo with emotion and soul.  The next track, "Come Rain Or Come Shine", has a similar feel but leans more towards the blues.  Barron is such a fine musician, he could accompany someone playing a kazoo and the music would have soul.  After the strong sax solo, the pianist takes a short but sparkling solo with a most understated left hand rhythm.

The 4 quartet pieces range from the hard-hitting opening to 2 ballads (a sweet reading of "The Very Thought of You"and a bluesy, smooth, slow read of "Easy Living") and a straight-ahead blues reading of "Blue Monk."  On the Monk tune, Harper and Davis lock into a groove that both the saxophonist and pianist dig right into.  You can hear the Kansas City sound in the tenor solo that "gets down to it", Mr. Wess smearing notes and, on occasion, reaching back and letting fly. Harper's crisp cymbal work keeps the beat while he supports and pushes beneath the soloists.  His brush work on "Easy Living" is sublime as is the bassist's strong counterpoint (under both solos, Davis's lines stand out.) The music has plenty of space and you can hear the musicians interacting, having fun making music.

The program closes with the leader playing a solo version of Duke Ellington's "All Too Soon", a piece first recorded by the composer in 1940.  Mr. Wess stays in the middle-to-upper ranges of the tenor saxophone as he moves through the melody and his eloquent improvisation.  The breathy sounds may remind some listeners of Ben Webster in his later years; both men create solos off the melody lines and both often display a "singing" quality in their phrases.

A strong recording, "Magic 101" is creative, highly melodic and easy to take on a hot summer night (or  any time of the year and day.)  Frank Wess rolls right along, playing music that keeps him (and us) young.  For more information, go to www.iporecordings.com.  You can also check out frankwess.org but the site need to be updated (except for the "schedule" page).