The news came as a bit of a surprise.  Jason Crane had closed his podcast "The Jazz Session" in October of 2012 hoping to find gainful employment out in the real world (those of us who write  about or broadcast Black American Music know full well it's not a growth industry.  That writ, there are plenty of fine young writers and radio people involved with the music and its people.)

"The best-laid plans...", as they say, don't always pan out and Jason, while he did find a job and did create a new radio program (not to forget the fine poetry he has written in the past 8+ months) is now out of that job.  His missive, which arrived via email, reads (in part):


Why do musicians do what they do?


Answering that question was at the heart of the 417 episodes of The Jazz Session that aired from 2007-2012. My guests included Sonny Rollins, Ron Carter, Maria Schneider, John Abercrombie, Robert Glasper, Marian McPartland, Darcy James Argue and hundreds of others. I loved asking questions that got beyond the mechanics and uncovered the passion, the thought, the inspiration behind the music.
Let's do it again.
So many of you helped me keep the show going in its first five years. Now I'm asking you to help me produce 12 new episodes -- one per month for a year. The money raised in this campaign will send me to New York for a week to conduct the interviews, and it will help pay for the production costs and the server space for the show. That server space alone is getting very expensive, given the show's 2.5 million downloads (and counting).

But let's do even more.

The centerpiece of each episode will still be an in-depth interview with a jazz musician. But each episode will also have an extra segment. It might be a jazz book or CD recommendation; a short talk with an author or writer about a particular jazz-related topic; or maybe a look behind the scenes at a special event. One thing is for sure: there will be even more jazz info in each and every episode.

You don't have to wait to hear a new show.

Visit http://thejazzsession.com right now to hear a brand new episode featuring pianist Geoffrey Keezer talking about his new solo piano record. It's my way of saying "thank you" for your support, and I hope it makes you want even more episodes. And no, this doesn't count toward the 12 new shows. So really, you're getting 13.

If you love jazz ... if you love music ... if you care about documenting history as it happens, please help me bring back The Jazz Session. 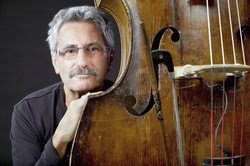 Summer has certainly arrived in Connecticut, especially with the news that the "Monday Night Jazz in Bushnell Park" series is resuming on Monday July 8 and running through August 12.  The arts scene in Hartford has really come back to life in the past year and it's great to see that this series, which began in 1967 and was curated by bassist Paul Brown, continues to bring quality music to the city and region for free!

Mario Pavone, the gentleman resting on his bass violin above, kicks off the 2013 series and he's bringing his Orange Double Tenor Septet. The ODTS features Connecticut natives Jimmy Greene and Noah Preminger on saxophones, Dave Ballou on trumpet,  and long-time Pavone associates Peter MacEachern (trombone), Steve Johns (drums) and the great Peter Madsen on piano. Pavone is also appearing this Friday July 5 at Cafe Nine, 250 State Street in New Haven - everyone but Jimmy Greene will appear on that night. (For more information, go to cafenine.com.) The Bushnell Park show kicks off at 6 p.m. with Rahstet, saxophonist Rich McGhee's tribute to Rahsaan Roland Kirk.

The series continues on July 15 with a double bill featuring the Stanley Cowell Quartet (the pianist is pictured left) with the Nita Zarif Quintet as the opening act. July 22, the series hosts the Jay Hoggard Quintet with the Norman Gage-Kenny Reed Quintet opening the festivities.  July 29 will have a serious Latin feel when the New Cuban Express led by pianist Manuel Valera and featuring saxophonist Joel Frahm come to the Insurance City. The opening act that evening Hartford's own Tropiijazz.  The 2 shows in August feature the Will Calhoun Trio with the Orice Jenkins Septet (8/05) and harpist Brandee Younger's Quintet featuring Hartford native Dezron Douglas on bass with the Shenel Johns opening the evening.  Did I mention this is free?  The rain venue is the Asylum Hill Congregational Church, 814 Asylum Avenue.  For more information, go to www.hartfordjazzsociety.com/mnj-schedule.html.

And, if that's not enough live music for you, you can head over to Black-eyed Sally's, 350 Asylum Street, for its "Jazz Mondays" series.  Scheduled to appear in July are the Haneef Nelson Sextet (7/08), the Lauren Sevian Quartet (that's Ms. Sevian above and she's in the Park on 7/15), the Larry Willis Quintet featuring Steve Davis and Mike DiRubbo (7/22) and Radam Schwartz & Organ-ized featuring drummer Ralph Peterson (7/29).  All this is sponsored by the Charter Oak Cultural Center.  For more information, go to www.charteroakcenter.org/index.php/category/jazz-mondays or call the venue at 860-278-7427.