In New Haven, CT, there are a number of reasons one knows that summer is around the corner, e.g., Yale graduation, the International Festival of Arts & Ideas sends out its annual catalogue and the Firehouse 12 Spring Series comes to a close.  All of which is exciting but the last one is certainly bittersweet. 14 concerts on 14 consecutive Fridays is a wondrous occurrence for those of us who do not live in or get to New York City or Boston on a regular basis.  Kudos to Nick Lloyd, Carl Testa and the wonderful staff for the creative programming!

Ultimate concert of this season belongs to Ches Smith and These Arches. Drummer/composer Smith, a native of California, is the backbone of several fine creative music ensembles including those of guitarist Mary Halvorson and alto saxophonist Tim Berne, both of whom are members of These Arches.  Rounding out the quintet is accordionist/electronics specialist Andrea Parkins and tenor saxophonist Tony Malaby - Malaby is unavailable for this gig so Smith has rearranged the band's material for his long-time friend and associate, bassist Devon Hoff.  The group's most recent CD (its second), "Hammered", was issued earlier this year on Clean Feed Records.  The music Smith writes for this band blends melody, noise, exciting solos, tantalizing juxtapositions of interactions within the group and more.  The performance space will most certainly be "jumping" this week. 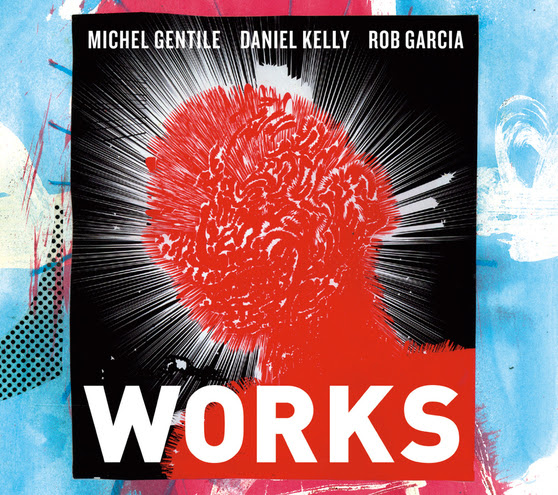 To quote from the mission statement of Connection Works - "Connection Works is an artist-run non-profit organization that engages the Brooklyn community with world-class jazz performances and educational events. Our programs promote and facilitate new work by established and up-and-coming artists alike. We provide a forum that supports the astonishing number of brilliant artists in our borough. We at Connection Works believe in and encourage the practice of creativity as a means to nourish the mind, body, and spirit."

The organization is the brainchild of drummer/composer Rob Garcia, flutist/composer Michel Gentile and pianist/composer Daniel Kelly. Since its inception, the organization has sponsored and continues to sponsor numerous concerts of new music, hosts a "Composers Workshop, and works in schools to promote music education.  Now, the principals have issued their first CD.  Titled "Works", the album appears on Connection Works Records. Each member has contributed 4 pieces including one short "Soliloquy".  The music ranges from Garcia's commanding "Island" that opens the program on martial rhythms to Kelly's classically-inspired "Chorale" to Gentile's rollicking, nearly out-of-control "Voir Dire."  Kelly's "Hundertwasser" (perhaps named for the Austrian artist/painter 1928-2000) explodes in on Brazilian rhythms and moves rapidly through its verses and choruses as Gentile's flute rides the waves created by the piano and drums.  The pianist also composed "Emanglons" which displays the influence of McCoy Tyner in the rhythmic piano introduction.  Kelly's subsequent solo (over Garcia's fiery drumming) builds off a thunderous left hand in the lower range of his instrument.

Gentile, who graduated from and has taught at The New England Conservatory of Music (graduates of that institution have been cropping up a lot in recent reviews), studied composition with George Russell and Muhal Richard Abrams.  He's played with Joe Lovano, Anthony Braxton and co-leads a duo with guitarist Tony Romano.  He contributes the CD's prettiest tune, "C'est Bien Ca", his full-toned flute leading the way through the winsome melody.  His "Commodius Vicus" closes the program with a sly twist in the rhythms, as they speed up, slow down, drop out and dance along besides the piano and drum.  The 3-way conversation is playful, right down to Garcia's tip-tapping on the high-hat and Kelly's modified tango lines.

Rob Garcia has issued 2 excellent CDs with his Rob Garcia 4 on Brooklyn Jazz Underground. His compositions smartly blend long melody lines with a forceful rhythmic approach.  His "Spring Comes Round" meshes a jazzy swing feel in the opening section with a classical break before moving to a rubato section and then back to the "jazzy" section for the flute solo.  Lots going on but always moving forward. The same can be said for the driving rhythms of "Will", with a wonderful stride feel in the piano and a bluesy Rahsaan Roland Kirk-influenced flute solo that leads right back to a statement of the opening theme into the high-energy drum solo.

"Works" is play, serious play, adult music that eschews borders in favor of cross-pollination. Many people might look at that statement and feel the music is too highbrow or forced. No way - this music is alive, filled with excitement that comes from 3 musician/composers who do not hold back or concede to  fad.  To find out more, go to www.connectionworks.org.  The CD Release Party is July 11, 2013 at the Cornelia Street Cafe, 29 Cornelia Street in New York City -  to find out more, go to www.corneliastreetcafe.com.  While there, check the Cafe's amazing list of performances - it's enough to make one want take up residence in their performance space.

To call pianist/composer Satoko Fujii prolific is not giving the Japanese native and graduate of The New England Conservatory of Music the proper credit.  Since 1992, she has issued dozens of CDs, many on her on her own label Libra Records, with numerous ensembles, ranging from duos to the 4 different big bands she leads, composes and arranges for.  "Amazing" is a much more accurate word, because the quality of her output is downright stunning.

"Spring Storm" is one of her latest CDs and is credited to the Satoko Fujii New Trio.  Ms. Fujii organized the group in July 2012, calling upon bassist Todd Nicholson and drummer/percussionist Takashi Itani to perform a new book of her pieces.  They played several gigs and recorded this CD in March 2013.  In many ways, this music reminds me of the early recordings by the Myra Melford Trio (on Enemy Records and Hat Hut) i that the music ranges far afield and each musician contributes to the success of the music.  Nicholson, who worked with the late Billy Bang, Peter Brotzmann and William Parker before relocating to Tokyo, has a strong hand in the rhythmic direction of many of the pieces.  Itani has the ability to go "from a whisper to a scream" within the context of this music.  His whirling cymbals and gentle touch are perfect for the quiet ballad "Tremble" while his thunderous solo matches the pianist's intensity on "Whirlwind"  Ms. Fujii rumbles inside the keyboard while the bassist does some furious bowing during the drum spotlight.

The title track opens with a gentle shower of notes from the piano, an introspective melody which the bassist and drummer slowly enter.  Nicholson offers counterpoint while Itani emphasizes the quite power in Ms. Fujii's melody and solo.  A bass and hand percussion dialogue introduces "Convection" but the piece begins to heat up when the pianist joins the discussion with an active left hand.  Yet, the piece does not boil over, preferring to move in and out of quiet and loud sections.  "Maebure", the longest track on the CD at 14:01, displays more of Nicholson's excellent arco work and Itani's ever-shifting percussive landscapes.  A little past the halfway point, Nicholson moves to a pedal point, Itani into a steady, almost funky, rhythm and Ms, Fujii erupts with a solo that starts on fire and moves up and down in intensity.  The drum solo near the close of the piece is immense before the slow and quiet denouement, led by the arco bass.

Despite the fact that the Satoko Fujii New Trio has only been a unit a short time, "Spring Storm" is vibrant music and the group interactions fearless.   Ms. Fujii continues to find new avenues for her art and continues to mature as both a composer and musician.  For more information, go to satokofujii.com.