Live This, The First Week of Summer (Part 1)

Summer arrives this Friday (June 21) but the heat will be on in New Haven the night before.  With the International Festival of Arts & Ideas well into its first (of 2) weeks (artidea.org is a good place to check out the myriad events), here's a show jazz fans are sure to enjoy.  Bassist/composer Christian McBride comes to the Festival with his Inside Straight band.  The Quintet - McBride, Peter Martin (piano), Steve Wilson (alto and soprano saxophones), Warren Wolf (vibraphone) and Ulysses Owens, Jr. (drums) plus special guest Christian Sands (piano) - are in the midst of a tour celebrating its new Mack Avenue CD, "People Music" and they'll perform at 8 p.m. in Morse Recital Hall, 470 College Street.  Owens, Jr. is subbing for the group's regular drummer, the great Carl Allen, but it's no issue.  He and Sands play in McBride's Trio and they'll be releasing a CD in late summer.  For the 24-old Sands, it's a homecoming as he is a native of the Elm City. He studied with the late Dr. Billy Taylor and has worked with vibraphonist Stefon Harris, saxophonist Lou Donaldson and has traveled around the world.

For ticket information and more, click on the link above or call 1-888-ART-IDEA (278-4332.)  To learn more about the career and music of Mr. McBride, go to www.christianmcbride.com. 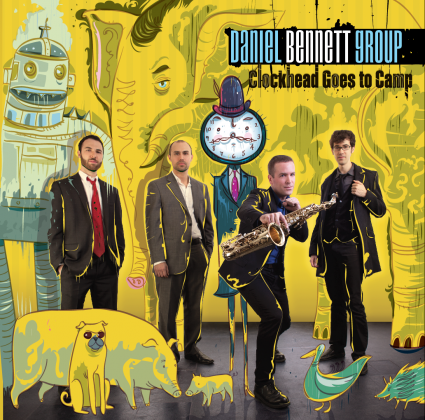 I had the happy occasion to chat with multi-reed player/composer Daniel Bennett - you can hear that conservation (for the time being by going to wliswmrd.net, going to the "On Demand" section and looking for "RK with Daniel Bennett."  We talked about the Daniel Bennett Group's new CD, "Clockhead Goes to Camp" (Manhattan Daylight Media Group), about his "roots", education (another NEC graduate) and his career. The DBG is playing a "CD Release Party" on Friday June 22 at the Funky Monkey Cafe, 130 Elm Street in Cheshire, CT (right off Route 10 in the center of town.) It's the ensemble's second CT gig this year as they played the Hartford Public Library's "Baby Grand" series on April 14.

For the Cheshire hit, the DBG includes Bennett, the group's New York City drummer Tyson Stubelek and Bennett's good friend, Assaf Kehati (guitar).  The music will be a giddy blend of folk, jazz, classical and pop with through-composed pieces as well as plenty of room for improvisation.  Bennett plays alto saxophone, flute, oboe and piccolo, with a pleasing, clean, tone on each and his long melody lines and the strong rhythmic of many of the songs is very appealing. To find out more about the Friday show, go to www.thefunkymonkeyycafe.com (check out their calendar - lots of stuff going on).  To get a taste of the DBG, go to www.danielbennettgroup.com.