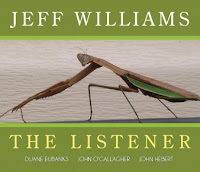 In 2011, drummer/composer Jeff Williams introduced the world to his new Quartet - John O'Gallagher (alto saxophone), Duane Eubanks (trumpet) and John Hébert - via his first recording as a leader in 16 years.  The CD, "Another Time" (Whirlwind Recordings), displayed an ensemble comfortable with each other, willing to stretch and take chances with the music. The instrumentation suggests the classic Ornette Coleman lineup from his Atlantic Records days; several of the pieces have that pleasing blend of blues, folk and post-bop influences that made Coleman's music so attractive.

Following the release of the CD, Williams did a short tour of the UK, recording the second show of the tour at The Vortex in London.  "The Listener" (Whirlwind Recordings) features a sharp package with the cover photos by the drummer and the same lineup as the previous album. The live format gives the band the opportunity to expand upon several the pieces from its debut CD, add some new tunes and throw in a standard.  The musicians are in fine form, especially Hébert, whose nimble fingers enliven every track. His long introduction to "Lament" is slow yet rhythmical, trance-like yet continually moving forward.  The bassist them plays the melody with the saxophone.  He supplies the bottom on "The Fez" so that Williams can dance along beneath O'Gallagher's lively solo. His sprightly "walking" lines are an excellent counterpoint to Eubank's fine solo on "Beer and Water", the track that opens the program. The trumpeter, a member of the musical Eubanks of Philadelphia (his brothers Robin and Kevin), does not get as much press as his siblings yet makes his presence felt throughout this CD with his razor-sharp phrases and clear tones.  His unaccompanied introduction to the Sammy Cahn/Hy Zaret/Sal Chaplin chestnut "Dedicated to You" is tender and emotionally rich, one of the high points of the CD.  He continues as the bass and drums enter quietly.  The feel of the piece gets quite "bluesy" staying that way as O'Gallagher enters 2/3rds of the way through. His fleet phrases push the rhythm section to drive a bit harder.  The alto player plays a "sweet' duet with Williams in the midst of "She Can't Be A Spy", moving on to joust with Hébert when he joins in.

Get the idea?  "The Listener" is filled with long stretches of rewarding moments, from the interplay of a snappy rhythm to heartfelt ballads. Jeff Williams supplies the majority of the tunes and the heartbeat that makes this program shine.  The band, plus guitarist Phil Robson, plays a "CD Release Party" on Saturday July 6 at Smalls Jazz Club, 183 West 10th Street in New York City - for more information, go to smallsjazzclub.com.  To find out more about Jeff Williams and his lengthy career, go to www.willfulmusic.com. 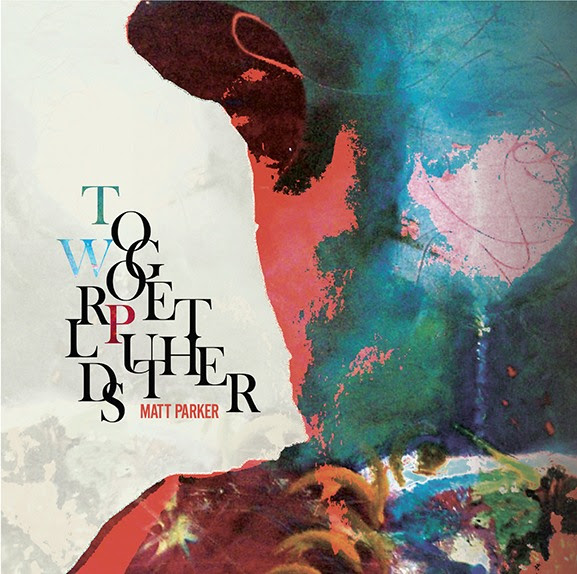 Tenor saxophonist/composer Matt Parker moved to New York City in 1999 from his native Florida to attend the New School for Jazz and Contemporary Music; he's been there ever since.  He's worked and recorded with the late Maynard Ferguson, plays with the Candy Shop Boys, co-leads the 2s & 4s, and appeared on drummer/composer Reggie Quinerly's delightful debut recording, "Music Inspired by Freedmantown."

"Worlds Put Together" (BYNK Records) is his debut as a leader.  Quinerly and bassist/co-producer Alan Hampton make up the rhythm section joined by guitarist Josh Mease (on 7 of the 11 cuts), pianist Jesse Elder (8 of the 11 cuts) and alto saxophonist Julio Monterrey (also 8 of the 11 tracks). The CD opens with the edgy "Eye of Rico" - first the saxes blurt out the opening lines and then it goes directly into Elder's quiet solo piano reverie.  The saxophonists return atop a churning rhythm stepping aside once again, this time for Mease's electric guitar.  Surprisingly, there are no saxophone solos.  Parker takes center stage for the short ballad (1:31) "I Can't Help It." Hampton's mournful arco bass leads the saxophonists into "Lists", another ballad that, this time, suggests the influence of Duke Ellington's "Black and Tan Fantasy."  "WPT" opens with a  funky sax line accompanying the tap dancing of Jimmy "Taps" Sutherland.  When the band returns, the piece moves into a faster tempo and goes on in raucous until the end.

4 tracks, 4 different approaches and that carries on for the remainder of the program.  Parker has a "big" sound, somewhat like Lenny Pickett of Tower of Power and SNL fame. He does not embrace a ballad as much as steamroll his way through (with the exception of "Darn That Dream", a piece for 2 saxophones though even that track has its fiery sections).  He and Monterrey blend their voices in "free" fashion on "Alien Baby", both rearing back and letting the notes fly.  Elder is the voice of sweetness in the midst of the storm, serving to cool off the steaming saxes.  The longest track (10:32) "Full Sun" starts slowly but soon picks up in intensity. The counterpoint of the trilling piano lines, circular guitar phrases and the quavering saxophone sections open to a short melody line but the piece does not really let loose until the half-way point when Monterrey steps out for an impressive solo.  Parker follows, lowering then raising the intensity bar as he prods the rhythm section to hit hard.

By the time the CD reaches the children-and-adults choir that "hams it up" through the simple, Nino Rota-like melody of "Zeynep's Piano", the listener is either laughing with glee or staring at the speakers puzzled by this eclectic program.  I say "Roll With It" - Matt Parker put his heart and soul into this project, revealing an original voice and surprising even himself with the ferocity of his playing. "Worlds Put Together" is an introduction that deserves your attention.  For more information, go to mattparkermusic.com.
Posted by Richard B. Kamins at 9:48 PM