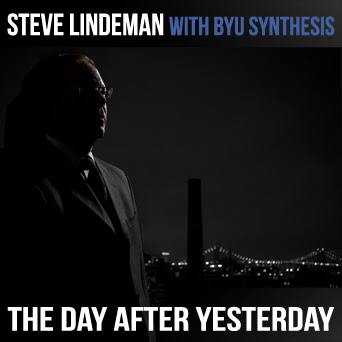 Those of us who live on one of the coasts of the US like to think that where you'll find the most exciting music.  Places such as Boston, New York City, Los Angeles, San Francisco, and Seattle are considered hot-beds for "new music" of all stripes when, in actuality there is great music being made in Chicago, St. Louis, New Orleans and Provo, Utah.  Provo? you ask.  That's the home of Brigham Young University where composer Steve Lindeman teaches and where "The Day After Yesterday" (Jazz Hang Records) was recorded.  The CD is made up of 10 original pieces, many of which were developed over the period of 3 years in which Lindeman participated  in the BMI Jazz Composers' Workshop.  The Workshop is held monthly (sometimes more) 9 months of the year and Lindeman managed to attend most of the meetings.  There he worked with Jim McNeely (who contributes one set of liner notes) and Mike Holober yet this CD does not feature session players from either coast but the 18-member BYU Synthesis, the school's premier jazz ensemble under the direction of Dr. Ray Smith.  Special guests include Kelly Eisenhour (vocals) and Steve Call (tuba) plus appearances by the BYU Faculty Ensemble Q'd Up, composed of Dr. Smith (flutes, saxophone), Jay Lawrence (percussion), Ron Brough (vibraphone, marimba, percussion) and the composer on Hammond B-3 organ.

As for the music, one hears the influence of large ensemble composers such as McNeely an Holober as well as Bob Brookmeyer and Maria Schneider but I also hear a touch of Steely Dan in pieces such as "Llevame ya Al Mundo de las Maravillas" and "Meet Me When the Stars Come Out." The former features Ms. Eisenhour, who contributed the lyrics and the overdubbed vocals (the arrangement also reminds me of the recent work of Lorraine Feather.  The myriad percussion instruments plus the fine guitar work of Brady Bills also makes a strong impression. The processed electric bass of Aaron McMurray leads the piece in, creating a groove that is hard to resist.  The longest piece on the disk, "Verloren (for Murray Boren)", opens with the plaintive solo tenor sax work of Ben Nichols before the band starts to enter, one section at a time.  The episodic tune has a 2 distinct Latin sections, the first dripping with sensuous rhythms and scratchy percussion and the second shorter but much more explosive, fueled by the dizzying percussion of Lawrence (guiro, timbales, etc) and Brough (congas) and the strong playing of Austie Robinson (trumpet) and Jory Woodis (soprano sax).

"October, Last" is an impressive piece of writing and arranging. The blend of high and low sounds (trumpets meshing with flute, vibraphone and bass clarinet), the colors they evoke, the unhurried manner in which the melody is laid out brings to mind the work of Ms. Schneider.  When the piano solo (Jordan Kamalu) emerges out of the theme and is followed by the spell-binding flute solo (Dr. Smith), neither the pace nor the emotional weight of the music wavers.  There's a similar feeling in the handsome ballad "I Remember", a loving tribute to the composer's father that features the expressive soprano saxophone of Jory Woodis.

While there are number of attractive ballads on the CD, the program closes with the sprightly "Take a Jake Break." While the solos (piano, trombone, trumpet and tenor sax) are short yet sweet, the section writing (and the execution thereof) is utterly charming.

You find a way to make "The Day After Yesterday" part of your life.  Large ensemble music is rarely as emotionally satisfying as the music that Steve Lindeman and the BYU Synthesis create on this recording.  This music invites you in, makes you smile, may help you relax and unwind and should stimulate your senses - can't ask for more than that. For more information, go to www.stevelindemanmusic.com. 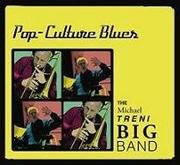 To the lay-person, blues is often labelled "sad" or "old-fashioned" music.  Fans of the big band music of Due Ellington, Count Basie, Woody Herman, and others know that the blues encompasses many moods. Listen to "Pop-Culture Blues" (Bell Production Company), the new recording by the Michael Treni Big Band and you'll know that blues (as interpreted by the trombonist/composer/arranger Treni) is alive and quite well.  Subtitled "A Suite in 10 Parts", Treni and his 18-piece ensemble take a musical journey inspired by the afore-mentioned Ellington and Basis as well as Oliver Nelson, Kenny Dorham, The Brecker Brothers, Gil Evans and more.  Powered, pushed and caressed by the fine rhythm section of Takashi Otsuka (bass), Ron Vincent (drums) and the piano work of Charles Blenzig (6 tracks) or Jim Ridl (4 tracks), the program is filled with good melodies and strong solos.

Ridl and Jerry Bergonzi (tenor sax) are the featured soloists on the hard-driving "Smokin' Blues" - the composer writes that the music was "inspired by McCoy Tyner" and one can hear that in the powerful work of Ridl (no imitation, though) and the explosive sax solo.  Vincent and Otsuka move like the Amtrak Acela (at full speed), imbuing the music with such spirit.  Bergonzi also stands out on the Oliver Nelson/John Coltrane inspired "Summer Blues", a tune that evokes warm, humid, nights and also features a splendid flugelhorn solo from Freddie Hendrix.  "Minor Blues" truly captures the spirit of Charles Mingus who inspired Treni to dig into the aspect of the blues that connects love, sex and longing.  The section writing behind the excellent trumpet solo of Chris Persad sways, struts and hits hard. The "suite" closes with the title track which, in the spirit of the big bands of the 1930s and 40s, features short, pithy. solos atop an urgent rhythm section.

More celebratory than somber, more soulful than technically correct, "Pop-Culture Blues" begs to played loud and often.  Michael Treni embraces and salutes his influences while writing to the strengths of his ensemble - by the time the last notes fade, the active listener will be more than satisfied.  For more information, go to www.bellproductionco.com/.
Posted by Richard B. Kamins at 7:40 AM