A Lorca Soundscape In NYC

Bassist/composer Alexis Cuadrado (pictured left) has a new piece that actually has its debut in October of last year - "A Lorca Soundscape" - and now, the recording will be issued in September of this year on Sunnyside Records.  Based on the poetry of Federico Garcia Lorca (1898-1936) wrote during the year he spent in New York City (1929-1930); during his stay, the Stock Market crashed and the poet observed people flinging themselves from buildings, others starving in the street, and his reactions were captured in poems that tend towards the surrealistic. Published posthumously in 1940 (4 years after the Franco government assassinated the poet/playwright/author) as "Poeta en Nueva York", the book did not become popular world-wide until years after its publication. 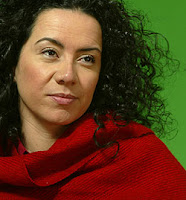 Cuadrado, a native of Barcelona, Spain, had read Lorca as a student but it was not until the Stock Market/banking crisis of 2008 that he was reminded of the book.  The music he created for the 8 poems he chose draws heavily on the composer's study of the folk musics of his native country yet, like his brilliant 2011 BJU release "Noneto Iberico", also displays the mesh of modern classical and jazz music Cuadrado has played and studied since moving to New York City at the turn of the 21st Century. The album features the stunning vocal work of Claudia Acuna (pictured above), alto saxophonist Miguel Zenon, pianist Dan Tepfer and drummer Mark Ferber plus a guest appearance from percussionist Gilmar Gomes (2 tracks).

On Friday June 21, Alexis Cuadrado brings the Quintet to the 92Y Tribeca, 200 Hudson Street in New York City to present "A Lorca Soundscape" at 8 p.m.  All the participants save for Zenon (replaced by "Noneto Iberico" group member, Loren Stillman) and Gomes will perform. For ticket information, go to www.92y.org/Tribeca/Event/Alexis-Cuadrado-Lorca-Soundscape.aspx and you'll find what you need to know.  If you go to www.alexiscuadrado.com/#/shows/, you'll find out more about the September CD release event.  And finally, I had the opportunity to talk with Alexis Cuadrado - you can find that by going to www.wliswmrd.net and clicking the "On-Demand" button (we are the second show in the lineup titled "Alexis Cuadrado and RK.")