This has been quite a banner year for vocal music, especially CDs by the fairer sex. Right now, if I had to assemble my Top 10, there might be as many as 5 CDs by women vocalists.  Here's 2 more that are in contention. 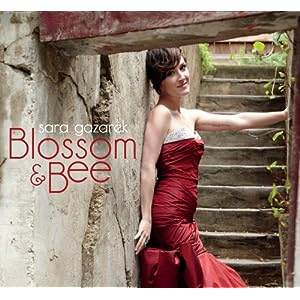 In March of this year, I reviewed the CD by Triosence featuring Sara Gazarek (read it here.)  That was my initial exposure to the Seattle, Washington, native's erudite composing and singing.  "Blossom & Bee" (Palmetto Records) is her 4th CD as a leader and first since 2007. It would be easy to look at this recording, produced by Larry Goldings, as a tribute to Blossom Dearie as Ms. Gazarek and her fine trio -  pianist Josh Nelson, bassist Hamilton Price and drummer Zach Harmon - play 5 tunes that the late chanteuse performed in her career (not to forget the hint in the title).  Interestingly, 3 of the songs were also covered by Amy Cervini on her fine "Digging Me, Digging You" recording that came out early in 2012 (more about that here).  Both vocalists do Ms. Dearie justice without trying to imitate or update her.  It's also fascinating that both open their recordings with same song, Rodgers & Hart's "Everything I've Got" from the 1942 musical "By Jupiter."  It's a clever lyric that should make you chuckle.  To her credit, Ms. Gazarek spreads the Dearie tunes across the 12 tracks. The title track, an original composed with Goldings and lyricist Bill DeMain, is a pleasing collaboration with guitarist/vocalist John Pizzarelli.  They wrap their voices around the lyrics, showing off some fine harmonies (Goldings' melodica solo is really nice.)

Nelson's accompaniments are excellent throughout, whether he's navigating the tricky meter of "Tea For Two"  or the painting the serious mood on Francesca Blumenthal's "The Lies of Handsome Men" (a track that Ms. Dearie recorded on her final album, "Blossom's Planet.")  The pianist leads the prancing drums and active bass through the sprightly version of "Down With Love."  Messrs Price and Harmon are so supportive, certainly not intrusive. They certainly can "rock out" as they display on George Newhall's "Unpack Your Adjectives", a tune Ms. Dearie recorded for "Schoolhouse Rock."  Price's melodic bass lines lead the vocalist through her heart-felt reading of Ben Folds' "The Luckiest."  Harmon can be whisper-soft, even on up-tempo pieces such as "Some of These Days", his brushes supporting Goldings' bluesy organ and Pizzarelli's Freddie Green-like rhythm guitar.

Like a number of her contemporaries, Sara Gazarek is telling a story when she sings a song.  No need for showy embellishments or overwrought emotions, which allows the listener to hear each word without having to struggle. There's plenty of variety in the arrangements - perhaps the only misstep in the program is "Fly Away Birdie", an original that has the sound and feel of a Norah Jones tune.  That aside, "Blossom & Bee" is sweet nectar, music for the swing on the back porch or dancing close to your significant other.  The CD is released on Tuesday June 19 and, by then, you should be able to listen to the songs at www.palmetto-records.com.  To learn more about Ms. Gazarek, go to her site at www.saragazarek.com.

For what it's worth, thanks go to Ms. Dearie, Ms. Cervini and Ms. Garzarek for singing the opening lines of "Tea For Two" as opposed to going directly into the chorus we all know and love. Irving Caesar's lyrics (for Vincent Youman's melody) are charmingly poetic for 1925 (or any time) - the opening couplet goes like this:

I'm discontented with homes that I've rented
So I have invented my own.
Darling, this place is a lovely oasis
Where life's weary taste is unknown.

Maria Neckam's impressive contributions to the excellent new recording by bassist/composer Anne Mette Iverson ("Poetry of Earth" on BJU Records - my review is here) made the wait for the release of her new CD, "Unison" (Sunnyside Records) feel like forever.  Happy to report that the wait was more than worth it.  The native of Austria who now resides in Brooklyn, New York, Ms. Neckam has created a program that doesn't just cross borders, it obliterates them.

And, chances are good it will take listeners a while to get into this 75 minute musical journey. With a core group of Aaron Parks (piano, Fender Rhodes), Nir Felder (guitar), Thomas Morgan (acoustic bass) and Colin Stranahan (drums), this program is often mesmerizing, making time irrelevant and coaxing one to pay attention. The martial drumming and thick piano chords of the opening "I Miss You" has a Radiohead feel, carried over to Parks' off-center solo underpinned by Felder's atmospheric guitar.  Instead of continuing in that vein, the piano fades into the cello of Mariel Roberts.  As "The Story" unfolds, Stranahan's poly-rhythmical drumming pushes the ensemble forward, harder as the alto saxophones of Will Vinson and Lars Dietrich plus the tenor saxophone of Samir Zarif are added.  By the time you get into the third track, "Obsessed", one realizes that there are several "constants" - each track is unique, Ms. Neckam's vocals, more often than not, are percussive in nature (her interactions with the rhythm section makes one believe that these songs were "workshopped" in concerts) and her wordless contributions make her another instrumentalist.

The surprises are numerous.  The haunting setting for voice and cello of "Where Do You Think You Will Be?", the words of 14th Century Persian poet Hafiz (often spelled Hafez), illustrates the vocalist's acceptance of Buddhism. The duo return near the end of the program with an evocative reading of Pablo Neruda's poem "You Will Remember."   The blend of Glenn Zaleski's circular acoustic piano lines with Parks' Satie-like Rhodes phrases on "Unavailabilty" create a serene setting for lyrics that speak of an obsession with a person being aloof (all this in less than 3 minutes.) The wondrous interplay of instruments and voice on "Your Kindness" is nearly dazzling;  as the musicians move in and out of the center, Ms. Neckam makes the most of 12 words, repeating the lines like a mantra.  She clothes Rainier Maria Rilke's words for "Solitude" with the impressionistic sounds of alto and tenor saxophones. The lyrics speak of rain and couples who have fallen out of love. The 3 voices move around each other, utilizing small pieces of silence to emphasis the words and the emotions within them.

The flow of "Unison", at times, has a Brazilian feel, with tempos that start and stop, voices rising out of the background or above the ensemble.  And there is a classical/progressive rock structure to the instrumental lines on several tracks including the hypnotic "Laundry Song" - one is drawn to the cascading piano lines as well as the impressionistic lyrics but pay attention the wonderful work of Morgan and Stranahan.  Both hit hard as Dietrich's blistering alto solo sets the table for Zarif's hardy tenor spot on "You and I" but the pace slows at the close for the voice and piano.

Perhaps I have told you too much but this recording is so striking, so inviting, sensuous, spell-binding, one can (and did) get carried away.  Allow yourself to get lost in "Unison"; enjoy the fine musicianship, the intelligent arrangements, the poetic expressions and the imagination of Maria Neckam.  For more information (including the lyrics), go to www.marianeckam.com.
Posted by Richard B. Kamins at 7:01 PM