The Next Roundup (Part 2)

Watching Paul Simon in "Under African Skies", the recently televised movie of the 25th Anniversary of "Graceland", I was struck by a number of different parts of the process that brought the music to fruition, then on to the stage and into history.  First of all, Simon broke the African National Congress's boycott of any interaction of non-residents with South Africans, especially those who were the victims of apartheid.  Secondly, it was mighty gutsy (or stupid, depending on your viewpoint) of Simon to enter South Africa in 1985 and then spend several days in the studio recording with Black musicians.  Granted, he paid them 3x union scale and, when he finally released the music, he gave composer credits where they were due. The film clips from the initial recording sessions are priceless as Simon attempts to pick up on the grooves he had only heard on cassettes and to steer the participants into different directions. Third, Simon has continued his relationship with a number of those musicians, including Joseph Shabalala & Ladysmith Black Mambazo, guitarist Ray Phiri, the incredibly gifted bassist Bakithi Kumalo, and keyboard player Tony Cedras (who joined Simon's band after the recording.) One fascinating revelation from Simon's work with these musicians is that he had a hard time fitting his lyrics to Phiri's unique guitar lines and found it easier to work off of Kumalo's phrases.

"Graceland", the recording, was a huge success in this country and around the world. The subsequent tours introduced millions of concert goers and viewers to the work of very talented South African musicians and vocalists.  And, the music holds well after a quarter of a century ("You Can Call Me Al" is goofy but irresistible while the title track is a true fusion of many genres.)  "Under African Skies", the documentary, is definitely worth watching, especially how Paul Simon has relaxed in this music. Older, perhaps wiser, the words and rhythms have to be part of his blood and it's fun to see him enjoying these experiences.  For more information and to watch the trailer, go to www.paulsimon.com/us/video/under-african-skies-graceland-documentary-trailer. 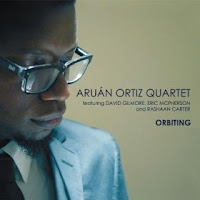 Cuban-born pianist Aruán Ortiz has made quite a name for himself, even before moving to the United States in 2003. He participated in bassist Esperanza Spalding's "Junjo" CD, has worked with flutist Mark Weinstein, saxophonist Greg Osby and, most notably, been a member of trumpeter Wallace Roney's ensemble.  "Orbiting" (Fresh Sound New Talent) is his 4th recording as a leader.  The band Ortiz has assembled features the fine guitarist David Gilmore, bassist Rashaan Carter, and drummer Eric McPherson. Their interactions are creative, honest, exciting and, even when the music is fast, the quartet does not overplay.  The program includes 4 originals and 4 tunes from other sources.  Charlie Parker's "Koko" is a playful take on the bebop classic, with touches of "free jazz" and fierce interactions between Gilmore and Ortiz.  They also work well off each other on the stately reading of the Schwartz/Dietz classic "Alone Together", Gilmore's ringing tones gliding over the pianist's rich chordal playing.  There is an exciting dynamic on the group's reading of Ornette Coleman's "WRU", a smart and fun blend of the "blues-swing-hard bop" that the composer created on his late 1950s-early 60s Atlantic Lps. Ortiz's ethereal solo really stands out as does the fine rhythm section work of Carter and McPherson.


On the title track, an original, each member of the group states the theme as they move through the song.  The stop/start action of the rhythm section adds extra tension to the solos and it is fascinating how Gilmore and Ortiz move through their spots.  "Green City" features an smartly structured theme and subtle shifts in tempo as well as intensity. Ortiz takes his time building his solo, sometimes taking cues from McPherson's dancing drum work, other times seemingly lost in musical contemplation.  The striking audio painting "Numbers", with its intense rubato and cinematic melody displays a classical influence.


The music Aruán Ortiz and his cohorts make on this CD is well-worth investigating.  By eschewing any single genre, this music sounds fresh, alive with possibilities and makes one hope that this band "hits the road."  For more information, go to www.aruanortiz.net. 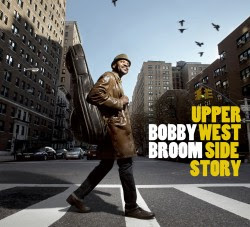 There are recordings you put into the player and listen to all the way through.  Then you do it again not only to make sure the music is as good as it sounded on the initial run-through but also to listen a little closer.  Guitarist Bobby Broom began his professional career at the age of 16, has worked with a slew of great musicians, especially Sonny Rollins.  Since moving to Chicago in the 1990s, he has lead a Trio with bassist Dennis Carroll and drummer Kobie Watkins; both appear on "Upper West Side Story" (Origin Records) (Makaya McCraven replaces Watkins on 3 of the 9 tracks.) This is Broom's 10th recording as a leader (he also co-leads Deep Blue Organ Trio, a group with 4 CDs over the past decade) and first with all original material.  The leader had a softer tone yet can play with fire when the music calls for it.  The Trio tears through "Frambocious (for Fambrough)", dedicated to the bassist who passed on New Year's Day 2011.  The rhythm section stokes a fairly hot fire and Broom flies over it. There's a funky feel to the rhythm and opening guitar riff of "Catch Me A Cab", Carroll's thick bass tone and and solid phrases serving as a foundation while Watkins swings and Broom digs in for a fine solo. The interaction of the Trio really shines on "When The Leaves Fall...", the medium-tempo track that closes the program. Broom's crisp notes, full chords and subsequent percussive riffs seem to stand out over the spare rhythm section yet, as the piece moves towards its climax, Watkins doubles his tempo as Carroll's pulsating bass figures create a fine cushion of sound. McCraven's contributions do not change the overall sound of the Trio.  He locks into the groove on "Father", especially as Broom pushes the intensity, and, along with Carroll, moves "Minor Major Mishap" into quite a playful direction.

The music that Bobby Broom and his band creates is for people who like jazz that coaxes and cajoles, soothes and caresses but does not go off on crazy tangents.  That's just fine - Broom is a mature player who can be quite creative even as he is being quite entertaining.  For more information, go to www.bobbybroom.com or to his page at Origin Records, which is originarts.com/artists/artist.php?Artist_ID=106.