The Next Roundup (Part 1)

Jason Crane, yes, he of The Jazz Session, has hit the road and you can follow his adventures by logging in at jasoncrane.org.  Crane, who is also an accomplished poet, will give readings while on tour as well as interview a slew of musicians in his continuing quest to acknowledge the many people who are busy creating jazz. And, there are ways to support him - clink on the links above to check it all out. 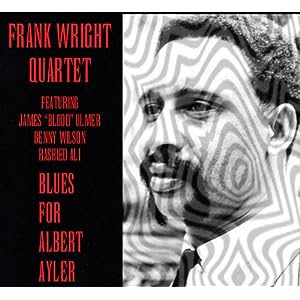 NAXOS of America has begun to re-issue ESP Disks, the American label that did so much to document "free-jazz" and creative African American music in the 1960s and 70s.  Among the latest releases is "Blues for Albert Ayler", a 1974 recording by the Frank Wright Quartet.  Wright (1935-1990) played tenor saxophone and flute and signed with ESP in the mid-60s.  By the end of the decade, he had relocated to Europe which was a much more active scene for musicians involved in "free avant-garde." At the time of this recording (July 1974), Wright had decided to move back home and assembled the quartet on this CD with drummer/club owner Rashied Ali.   Rounding out the band was bassist Benny Wilson and guitarist James "Blood" Ulmer. The tapes lay dormant until 2007 when Ali (1933-2009) played them for current ESP producer Michael D. Anderson.  He and Ali soon signed a contract but it has taken until 2012 for the music to be released.  Recorded live at "Ali's Alley", the music pays tribute to Ayler displaying much of the same intensity and sonic explorations that the saxophonist (1936-1970) created in his time on the scene.  Powered by Ali's explosive drum work and Wilson's active bass lines ( his isa name unknown to me though he worked regularly with Ali in the 70s), Wright pays tribute to Ayler's creativity by being his own man.  Ulmer, whose guitar work was and still is informed by the work of Ornette Coleman, is a strong presence, adding fiery licks throughout much of the 74+ minute 6-part "Suite."  There are stops along the way for unaccompanied solos from Ali and Wilson (his bowed bass solo lasts 12 minutes) as well as intense dialogues from Wright and Ulmer.

There is quite an assemblage of musicians on "Marzette Watts & Company", 3 pieces written by the saxophonist and recorded for ESP in December of 1966. The front line includes Byard Lancaster (alto sax, flute, bass clarinet), Clifford Thornton (trombone, cornet), Sonny Sharrock (electric guitar) and Karl Berger (vibraphone) and a rhythm section that consists of J.C. Moses (drums) and either Henry Grimes or Juni Booth on bass. Watts (1940 - 1998), a native of Alabama, was quite involved in the Civil Rights Movement as a student at Alabama State College and his music reflects the turbulence of the times.  Yet, it is hardly cacophonous but more impressionistic with the reeds, brass, vibes and Sharrock's raucous guitar weaving in and around each other - yes, the band blows quite hard at times but the intensity is built organically from the interactions of the ensemble.  There are several moments where one can hear the connections between this music and the sounds Miles Davis created on "Bitches Brew".

Watts later recorded for Savoy Records but, in the 70s he became a recording engineer and then an educator (with a short stay at Wesleyan University here in my hometown, brought to the school by Thornton, who spent 6 years on the faculty.)  This reissue is a welcome reminder of the power of creative interplay and Marzette Watts' voice in the creative avant-garde. 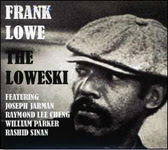 Last but certainly not least is "The Loweski", a 1973 recording from tenor saxophonist Frank Lowe and a companion piece to the better-known ESP Disk, "Black Beings".  The 5-part suite features Art Ensemble of Chicago founding member Joseph Jarman, bassist William Parker, drummer Rashied Sinan and violinist Raymond Lee Cheng (also known as "The Wizard" - these recordings are the only ones in his discography.) While the Watts' recording hinted at high-energy, "The Loweski" has moments of true caterwauling.  Lowe kicks off the proceedings with a long, unaccompanied solo that goes off in many directions, with melodic shards followed by riffs with a hard, percussive, feel.  Throughout his career, Lowe was known for "pushing the envelope", never settling for cliches or giving in to currenbt fashions. "Part 2" features Lowe's tenor locked in a squalling match with Jarman's alto while the rhythm section pushes at breakneck speed.  "Part 3" features Cheng's violin being shredded over those same fiery rhythms (Sinan is quite impressive pushing the tempo). Parker, who today is acknowledged as a fine bandleader and composer, is quite solid here, his propulsive lines matching the energy of the soloists and drummer.

These 3 ESP Disk releases remind us of those post-John Coltrane years, when musicians continued to push against barriers and boundaries.  Many of these musicians left the United States not only because of the political climate (the Vietnam War, urban riots, the Nixon Presidency) but also because European audiences seemed to be more open to adventurous music.  For more information about these recordings and other offerings from ESP, go to www.espdisk.com. 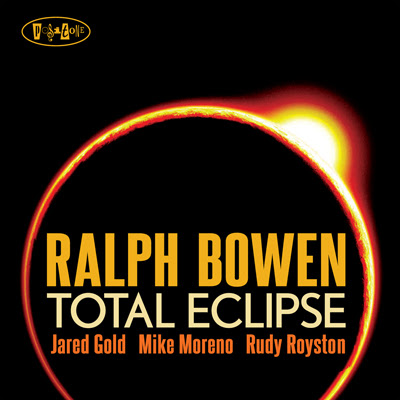 "Total Eclipse", the 4th Posi-Tone Records release from Ralph Bowen, has much to recommend it. Just look at the group Bowen plays with; the fine young organist Jared Gold, the supple guitarist Mike Moreno and the splendid drummer Rudy Royston. Powered by the drummer (who, in the last few years, has worked with saxophonist JD Allen, bassist Ben Allison, guitarist Bill Frissell, bassist Linda Oh and so many more), this music seems to surge forward. His relentless drive on "Hip Check" really propels the band (the leader lays down his most high-powered solo of the set) while his increasing intensity on the title track (you can download it below) spurs everyone to really dig in.  Yet, his subtle touch paired with Gold's creative accompaniment on "On Green" complement the fine solos of Moreno and the leader.  Then, there is Gold who continues to impress with his overall work.  As an accompanist, he reminds me of the late Larry Young in his early Blue Note days.  He's quite impressive throughout but no more so than on "Exosphere" where his background work is essential to the forward motion of the tune.  Yes, he's got "soul" in his phrases, blues in his sounds, but his solos are jazz to the core, explorations that go in unexpected but smart directions.   Moreno is a solid partner to Bowen on the front line, his "round" yet sometime "sharp' sound playing off the burbling organ and hearty tenor saxophone.  He understands how to build a solo, often starting out experimenting with a counter-melody then digging into the groove and pushing the intensity (all this is quite noticeable on "Arrows of Light.")

As for Ralph Bowen, he luxuriates and flourishes in these sounds.  His tenor sounds quite relaxed yet also quite focused. The 9 tracks, all Bowen originals, feel fresh, taking influences from all parts of the jazz world (hard-bop, funk, touches of Latin rhythms) and creating good music.  The sweet melody of "In My Dreams", the only true ballad on the CD, brings to mind soul music from the 1970s while "Into The City" is "funk-swing" at its best.   Bowen plays some solid soprano sax on "The Dowsing Rod", his handsome tones and lyrical solo giving way to the more "stinging" sounds of Moreno's guitar.

Play "Total Eclipse" from beginning to end and you'll hear 4 musicians not only having a great time but also making adult music of the first order.  "Adult", in that is not "dumbed-down" for commercial success but that it is playful, inspired, fully realized and involves the listener on many levels.  Ralph Bowen continues to produce really good music - don't hide your eyes or ears from this "..Eclipse."

Here is the title track, courtesy of Posi-Tone Records and IODA Promonet:
Total Eclipse (mp3)
Posted by Richard B. Kamins at 9:39 PM