John Friedlander, former co-conspirator of the Church House Concerts Series held in he and his wife Debi's old home in Haddam, CT, read the previous column on female vocalists. He them wrote to hip me to the fact that Canadian chanteuse Susie Arioli will be performing Wednesday June 20 at the Katharine Hepburn Cultural Arts Center, 300 Main Street in Old Saybrook.  Ms. Arioli, backed by a band featuring long-time collaborator Jordan Officer (guitar), are touring in support of "All The Way", her 8th CD and first for the Jazzheads label. 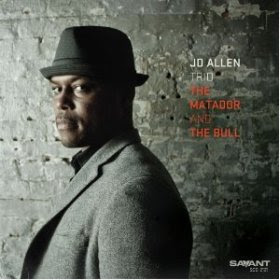 JD Allen, the tenor saxophonist/composer and native of Detroit, Michigan, has been on quite a roll the past 4 years. Not only for his long-standing gig with trumpeter Jeremy Pelt's group but also with his splendid Trio of bassist Gregg August and the ubiquitous drummer Rudy Royston.  The Trio has issued 3 fine CDs for Sunnyside Records beginning in 2008 with the declaratory "I Am-I Am".  Listeners and critics were knocked out by the compositions, the instinctive interplay, the short but pithy solos and strength of the Trio's sound.  2012 finds Allen and the Trio on a new label, Savant, with a new CD, "The Matador and the Bull" but with the same determination, interplay and intelligent writing.  Most readers know of my recent "reviewer crush" on Rudy Royston - he has become one of the most "in-demand" drummers on the New York scene and his playing can ignite any group he plays with.  In a group where everyone's work carries equal weight, his work is an absolute treat.  August has a big bass tone and is called on to be the "timekeeper" throughout this music; over the past 4 years, he has developed into a forceful presence on the bass. His potent bowing on "Cathedral" even sounds like a choir of church bells.

The new CD has 12 tracks, only 2 over 4 minutes, yet never feels undeveloped or lacking.  Allen's writing for this release has a harder edge, playing with time signatures, varying dynamics and emotional solos.  His tenor playing is steady, melodic, staying within himself and never losing control (or, for that fact, "showing off") - even on faster pieces, such as the joyous "Ring Shout!", he doesn't overplay, digging right into Royston's powerhouse drumming (pay close attention to his fascinating cymbal play) and August's propulsive bass lines.  Notice how all 3 play the melody and then work off of it in their own fashion (and all this in 161 seconds!) The ballads, such as "Santa Maria (Mother)" and "Muleta", have a gravity and strength that, in both instances build from not only the saxophone but also the bass.Still, Royston's drum intro to "The Lyrics of Summer and Shadow" set the pace and tone for the richly melodic piece.  At times, one can hear the influence of Branford Marsalis in Allen's writing (especially the melody of "Vuela (The Whisperer)" and his saxophone phrases that never seem disconnected or dispassionate. The Trio fires on all cylinders on burners like the hard-bop "Passiello" (the forward motion on this track is heart-pounding) and the fiery "Pinyin" (with even more splendid cymbal work).

In the liner notes, JD Allen comments on the short length of his songs stating  "...I also genuinely believe that on record you should be able to tell your story in a few choruses and get out.  I strive for that.  I think it's how you reach people, especially in the modern world where people have so many things vying for their time."  One of the finer qualities of  "The Matador and the Bull" is how the music and performances resonate long after the songs have faded out.  The JD Allen Trio - accept no substitutes!  Amazingly (for this day and age), Allen does not have a web presence (his mySpace page has not been updated in over a year, his website has closed down and he's not on Facebook) but you can get the Trio's itinerary by going to www.rudyroyston.com.  (Photo above by Andzrej Pilarczyk.)
Posted by Richard B. Kamins at 9:49 PM