There are some times in one's day when music is the only panacea, a day when the events in your life take a sad turn.  You want to be alone, perhaps to be miserable or you don't feel sociable. Words can convey the emotions one needs to express.

Into that day comes the opening 2 cuts of "Where The Time Stands Still" (Charleston Square), the new CD from Triosence with Sara Gazarek.  "I Can't Explain" (not The Who song) and "Summer Song" are so bright and breezy that the gray mood lifts long enough for you to realize life goes on and we have much to celebrate.  The first track rides in on a semi-reggae beat, Ms. Gazarek's vocal reminding this listener of Sara Bareilles. "Summer Song" has the lilt of a Vince Guaraldi composition, rising on the fine electric guitar work of Vitaliy Zolotov.   Triosence - Bernhard Schüler (piano), Ingo Senst (bass) and Stephan Emig (drums) - has been a entity since 1999, releasing 3 CDs.  Guitarist and educator Frank Haunschild (who appears throughout this CD) introduced Schüler to the music of Ms. Gazarek (a resident of Los Angeles, CA);  the pianist wrote to her and they began a collaboration that resulted in this recording.

Besides the breezy feel of the opening pieces, these songs have real emotional pull.  Ms. Garzarek has a fine voice, she articulates the words without resorting to any sort of filigree (melismatic swoops and dives, scat choruses); these songs are short stories, not short verbal fragments leading to long solos.  On pieces such as "Maybe There's a Princess Waiting", Schüler's accompaniment perfectly frames the vocal while bassist Senst adds counterpoint and Emig percussive color. "Let It In" has echoes of Carole King (circa "Tapestry"), with the voice framed here by soft guitars and hand percussion - Haunschild's solo builds off the chordal structure without seeming out of place. Senst's expressive bass work on "Only One Evening" creates both a cushion and counterpoint to the vocal and sparkling piano solo.  The program closes with the title track, a lullaby/prayer for voice, piano and the haunting violin work of Andria Chang.  It's then one realizes the program has moved intelligently away from the lightness of the opening tracks to more mature, fully realized, observations on life and relationships.

"Where Time Stands Still", for this listener, offered respite from harsher realities (which art/music can and should do).  Informed by jazz and popular music, Sara Gazarek and Triosence fuse their influences into a program that has echoes of many artists but displays the real emotions of the participants. To learn more about them, go to www.saragazarek.com and www.triosence.de. 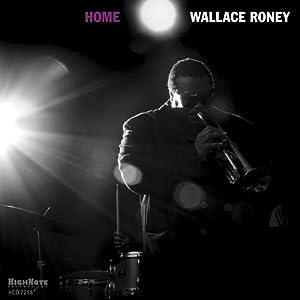 "Home" (HighNote Records) is new music from trumpeter Wallace Roney and continues in the vein he has mined for over 3 decades. The opening track, "Utopia", (a previously unrecorded Wayne Shorter composition), brings to mind the sound of the Miles Davis Quintet of the mid-to-late 1960s.  The piece has an "open-ended" feel, building off the energetic and smart drumming of Kush Abadey and expansive bass lines of Rahsaan Carter. Aruan Ortiz's understated piano meshes well with brother Antoine Roney's expressive soprano saxophone and the leader's shimmering brass lines.

As one settles into the program, the Davis comparisons begin to fade (yes, he plays "muted" on the title track and others but in his own way) and the listener can "get lost" in the strength of the interactions as well as the fine solos.  Abadey cedes the drum chair to Boston, Massachusetts, legend Bobby Ward on 3 tracks (his percussive "conversations" with the other musicians may remind some of Tony Williams) and Darryl Green on 2 tracks, including the other Wayne Shorter piece, "Plaza Real" on which he really pushes the band.  Wallace Roney's lovely ballad "Dawn" features the fine organ work of Doug Carn as well as brother Antoine's excellent tenor solo.  Both brothers step out on "Evolution of the Blues", egged on by Ortiz's pulsating chords and Abadey's declarative drumming.  "Ghost of Yesterday" is quite lovely, with the muted trumpet rising softly over Ortiz's lyrical piano and Burton's thick bass tones.  When Antoine enters, the intensity rises a bit yet he never overplays not succumbs to cliches.  The CD closes with "Revive", a short but intense drum solo for Bobby Ward - it honors his many years of dedication to the music and is a classy reminder that Wallace Roney is part of the jazz continuum, not apart from it.  He certainly is a mentor to the younger members of his band but also respects his elders.

Put "Home" on the stereo or whatever you use to play music and enjoy the ride.  This music satisfies.  For more information, go to www.wallaceroney.com.
Posted by Richard B. Kamins at 6:22 PM