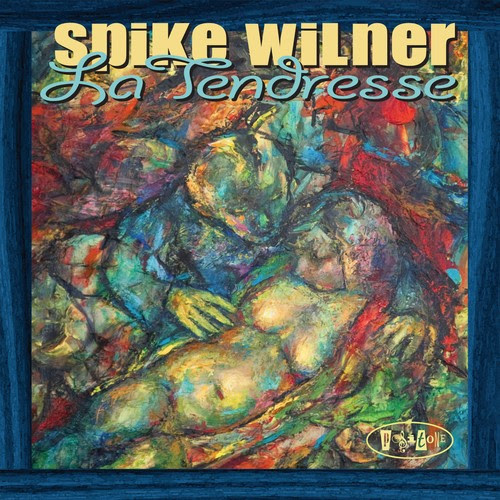 As the great critic Whitney Balliett once posited, jazz is the "sound of surprise" - in the case of "La Tendresse" the new CD from pianist Spike Wilner (PosiTone), the sense of surprise comes from Wilner's approach to the standards that comprise 2/3rds of the program.  Aided and abetted by Hartford native Dezron Douglas (bass) and Joey Saylor (drums), the pianist creates a delightful program.  After listening to his solo take on Harold Arlen's "If I Only Had a Brain", I jotted down the name of Jaki Byard on my pad.  Wilner's lively left hand and delicate phrasing as well as his trilling manner is ever-so-fine. Scott Joplin's "Solace" does not stray far from its New Orleans roots, quite reminiscent of bravado piano work of "Jelly Roll" Morton.  The rhythm section sounds a touch formal until you pay closer attention to Douglas's melodic lines and Saylor's light and, yes, lilting drum work.  Wilner's piano lines shimmer on the Trio's reading of Duke Ellington's "Le Sucrier Velours" (from "The Queen's Suite.") He displays an active left hand throughout the program and that frees up the bassist to play counter melodies.  His take on Thelonious Monk's "Crepuscule With Nellie"commences as a solo piano piece with Wilner concentrating on the melody, then drops into a slow blues shuffle after the rhythm section enters (Saylor is a real spark-plug on this track), coming back to the original melody for a playful close.

Besides "If I Only Had A Brain", there are several other solo piano pieces and each is as impressive as the other.  The Wilner original "Lullaby of the Leaves" is a blues worthy of James P. Johnson, melodic not strident. Wilner's take on "I'm So Glad We Had This Time Together" (composed by Joe Hamilton for his wife Carol Burnett's television show) shows a wistful side, staying close to the melody and not forcing a steady rhythm on top of the sweet melody.

The title track that opened the program on a hard-driving, mainstream, romp (actually going a bit "outside" for a few moments), is a somewhat misleading introduction  to the CD.  It;s the most "modern" sounding music the band plays (that's not a criticism; it's an intense piece, at times, played at a level the rest of the songs do not approach.)  Yet, by the time you reach the last track, appropriately titled "Happy Ending", a rip-roaring finish with solos by all 3 musicians, one should be be quite pleased with this musical journey. Spike Wilner's music goes in multiple directions and it really is a fun journey, one worth repeating many times.  To find out more about Spike Wilner, click here - it will take you to his page on the Smalls Jazz Club website.

Here is a taste of this delightful CD, courtesy of PosiTone and IODA Promonet:
Happy Ending (mp3)

Listening to Rudresh Mahanthappa talking with Josh Jackson on the April 17th edition of "The Checkout" ( do listen here), a lightbulb went off in the (fairly) dim recesses of my brain.  The alto saxophonist talked about the influence of "prog-rock" in the jazz of the 21st Century.

Moving on to "The Calling" (Palmetto Records), the fine new release (his second as a leader) from pianist/composer Romain Collin, I hear the influence of groups such as Radiohead, Rush, and other progressive bands on the rhythms created by drummer Kendrick Scott and certain chordal patterns of the pianist.  Long melodic passages, shorter tracks without solos, the interaction of Collin with Scott and bassist Luques Curtis (like Dezron Douglas, a native of Hartford, CT) is more comparable to the model of The Bad Plus and the Brad Mehldau Trio than to the music of Bill Evans or, for that fact, McCoy Tyner. Collin has a melodic streak a mile wide and his use of "programmed" sounds feels natural, not forced.  The sonic textures behind the rippling piano solo on "Greyshot" (created by guest Adrian Daurov, cello) are haunting and cinematic. Not that this music is all "sturm und drang" -  try the tricky rhythms of "Pennywise The Clown".  Yes, this is danceable, playful, music and the interaction of Collin and Scott is priceless (don't forget to pay attention to Curtis's solid contributions beneath his cohorts.) For me, Kendrick Scott is the perfect drummer for this music because he never settles for the tried-and-true.  His percussive playfulness on the opening of "Airborne" gives the music its wings while his actions during the varying dynamic settings the pianist creates illustrate that he is a drummer who listens yet is proactive (not reactive.) Listen to him drive "Runner's High", pushing the pianist and bassist without cluttering the sound, creating billows of cymbal splashes - the intensity in this music is incredible, especially since, much of the time, it's not played at a high volume.

The CD closes with "One Last Try", a solo piece with the air of nocturne composed by Claude Debussy.  Collin concentrates on the melody, never relying on excessive technical garnishes or overplaying. The music is emotionally satisfying and honest.  There are other tracks that display a classical influence, an influence that is not heavy-handed or artificial.

Romain Collin, a native of France and graduate of the Berklee School of Music as well as the Thelonious Monk Institute, has created quite a fine program with "The Calling." Thanks to Kendrick Scott and Luques Curtis for helping to give his music wings, for pushing the pianist forward and framing his melodies in a manner that feels fresh and without cliche.  Kudos also go to producer Matt Pierson who provided Collin with the freedom and guidance to cultivate his music.  To learn more about the pianist, go to romaincollin.com. Also, check him out in conversation with Jason Crane - click on the link at the top right of this post or go to thejazzsession.com.   Finally, to hear the CD, go to palmetto-records.com/album.php?album=183.