The quartet of Avishai Cohen (trumpet), Yonatan Avishai (piano), Omer Avital (acoustic bass) and Daniel Freedman (drums) call themselves Third World Love. They first came together in 2002 in Barcelona to play one gig and had such a good time they decided to become a band.  Over the past decade, they recorded 3 CDs, one each for Fresh Sounds New Talent, Smalls Records and Anzic.  "Songs and Portraits" is the band's second release for Anzic. Recorded in New York City in 2009, the music is a dizzying blend of influences, from Middle Eastern rhythms and melodies to Latin sounds to mainstream jazz.  Each band member contributes, at least, 1 composition with Avital composing 3 (plus the unaccompanied intro to "Sefarad"), Freedman 2, and Cohen and Avishai each with 1 (pianist Avishai credited for the arrangement of the traditional Yemenite song, "Im Ninalu.")  O, the rhythms they create, from the swirling sounds of "The Abutbuls" to the hard swing of "Song For a Dying Country" to the West African drive of Freedman's "Song for Sankoum." The latter is a "shoutout" to Senegalese drummer Sankoum Sissoko, has an irresistible drive (love Avishai's piano over the simple drumming in the first few minutes) plus several tempo changes. Cohen's clarion-call trumpet ushers in a ripping solo while Avital's percussive bass line paired with the solid drum work dances the piece forward.  Freedman also composed the lovely ballad "Alona" - it also appears on his new Anzic CD (reviewed in Part 1 - read it here) as a fine vehicle for tenor saxophonist Mark Turner. Here, it belongs to the sweeping piano lines and handsome trumpet. Pianist Avishai's "A Night in Zebulon" has an Ellington-type melody line;  it goes "out" a bit after the fine trumpet solo with Freedman's powerful drums and strong cymbal moving around the splashing piano chords. Yet, his piano solo is tender and melodic.  Avital's "Sefarad" (the ancient Hebrew name for Spain) has a fine melody, the Iberian influence showing in the trumpet and bass solos as well as Freedman's sympathetic drumming.

On "Songs and Portraits" one can really hear a band at work and play. They listen, they respond, nudge each other in new directions, never hogging the spotlight, always sharing.  Third World Love makes music that is creatively and emotionally strong.  Powerful stuff that is worth your full attention - for more information, go to www.thirdworldlove.com. 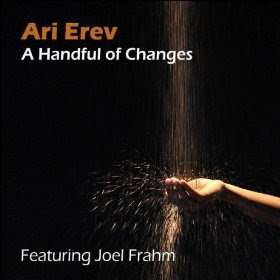 Pianist-composer Ari Erev, a native of Israel, is one of the busiest musicians in his homeland, playing jazz at festivals, concert halls, on stage and television.  "A Handful of Changes" (self-released), his second CD, finds him in several different settings, from duo to quartet to quintet to sextet.  His rhythm section features Eitan Itscovich (drums) and either Arie Volinez (electric bass, acoustic bass on 7 tracks) or Tal Ronen (acoustic bass on 3 tracks) as well as percussionist Gilad Dobrecky (6 tracks).  Joining him on 8 tracks is the seemingly ubiquitous Joel Frahm (tenor saxophone, soprano saxophone) while Ofer Shapiro plays alto saxophone and clarinet on 1 track each.  The generous program (11 tracks, 75+ minutes) ranges from straight-ahead jazz pieces to classical works to standards to creative interpretations of 2 works by Israeli composer Alexander "Sasha" Argov (1914-1995), a noted composer of popular Israeli songs.  Pianist Erev openly acknowledges the influence of Bill Evans (he leads a trio dedicated to the late American pianist) and it shows on Argov's lovely "Me'ever La'Tkhelet" (Beyond the Blue), a waltz with Ronen's excellent bass work. Shapiro's lyrical clarinet playing enlivens the other Argov piece, "Kshe'Or Dolek Ba'Halonekh" (Light In Your Window)

Elsewhere, Erev combines Chopin's "Prelude in E-minor Opus 28, No.4" with Cole Porter's "So In Love", the transition between the melodies aided by a pronounced Latin beat.  Frahm's work is exemplary throughout, especially the duet reading with Erev on the standard "For All We Know" and his fiery soprano on Erev's "Step by Step" (Volinez's electric bass work is also quite fine.)   "Irit's Wave", a lovely waltz dedicated to the pianist's wife,  prominently features Frahm's masterful tenor work - he is both powerful and melodic during his long, well-thought out solo.  Shapiro (alto saxophone) and Frahm (soprano) share the lead on "Precious Present", a bouncy piece with a decided Brazilian feel.

With such a long program, it can be hard to keep one's interest but Erev does a fine job of shifting tempos and rhythms, using different combinations of musicians, and providing a good melodic foundation.  His debut CD "About Time", released in 2008, was his tribute to Bill Evans - "A Handful of Changes" shows Ari Erev developing his own approach to jazz, smartly adding new voices to the mix.  To find out more, go to arierev.com.