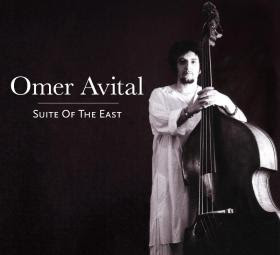 Bassist-composer Omer Avital has been at the forefront of the Israeli-American jazz connection since the early 1990s. Possessor of a mighty sound, he is, at times, quite melodic as well as rhythmical. "Suite of the East" (Anzic Records) features fellow Israelis Avishai Cohen (trumpet) and Omer Klein (piano), the latter 26 years old at the time and about to launch his international career.  Joining them is drummer Daniel Freedman and tenor saxophonist Joel Frahm (proving yet again he can play in just about setting.) Recorded in 2006 after a week-long residency at Small's, this music bristles with electricity and improvisational fire. Avital's imagination is fueled by the sounds and sights of his native land; most of these songs have rhythms and melodies one would find in Israeli folk tunes (where the myriad influences include music brought to the country from Yemen, Morocco, Jordan and elsewhere.)  The opening track, "Free Forever", builds from the opening moment atop Klein's McCoy Tyner-esque piano chords. When the sax and trumpet enter, the energy level jumps higher; yet,everything grows quiet for Frahm's melodic exploration which slowly builds to a pulsating climax. The title track opens with a solo piano excursion that is ruminative and thoughtful.  When the rhythm section, the counterpoint from the bass and the splashing cymbals move through the melody until Frahm enters with the handsome melody - the next section introduces the trumpet and Cohen weaves in and around the tenor part.  Next section starts with a short bass statement before dropping into a funky beat for the piano, then the brass and reed to play call-and-response.

"Song for Peace" is the longest track (14:49) - notice how Avital splits the melody line between tenor sax and trumpet, having them move towards each other until there is harmony.  The sensuous rhythm  pulls the listener in, mesmerizing even as becomes quiet for the trumpet solo. Freedman begins to push against the "quiet", accentuating the martial feel in his snare and beat on his ride cymbal.  Cohen responds without "boiling over", bringing the level down for the opening of Klein's long and involved solo.

There is not a weak cut or even weak moment on "Suite of the East."  There are pieces, such as "Sinai Memories", where the melodies played by both the bass and piano are so filled with emotion.  And, the CD closes with "Bass Mediation (on the possibility of peace in the Middle East", a solo piece for Avital that is both highly musical and also filled with great longing.  Perhaps one gets the feeling from the title but here Avital is most like Charles Mingus, another musician who channeled his anger, his dreams and hopes, into his music. Not sure why this session took 6 years to see the light of day but its arrival is most welcome.  For more information, go to www.omeravital.com.

Daniel Freedman, Omer Avital's rhythm section partner in Third World Love, has issued his 2nd CD as a leader (his self-titled debut was issued in 2001 on Fresh Sounds New Talent).  "Bamako By Bus" (Anzic Records), produced by the drummer/composer in 2009, features an "all-star" lineup including Lionel Loueke (guitars, vocal), Avishai Cohen (trumpet), Jason Lindner (keyboards), Abraham Rodriguez (percussion, vocals), Pedrito Martinez (percussion, vocals), Yosvanny Terry (vocals, percussion), Mauro Refosco (percussion), Davi Viera (percussion), Mark Turner (tenor saxophone), Joshua Levitt (ney flute) and Meshell Ndegeocello (bass) with Avital sharing bass duties on 1 track.   This is the sort of program that will drive jazz purists crazy because the music has myriad influences.  Yet, if you follow Freedman's career, you know he's worked Angelique Kidjo, Anat Cohen, Pharoah's Daughter, Charles Owens Quartet, and Sting, therefore the variety in this music should come as no surprise.  Loueke is featured on 4 tracks, including the highly rhythmical "All Brothers" (composed by Avishai Cohen and Freedman) - Ms. Ndegeocello's bass work is mesmerizing atop the fiery drumming  of Freedman and Viera.  The trumpet solo reflects the percussive nature of the piece while Loueke's vocal and guitar playing is exemplary. "Darfur/Oasis" pairs Loueke's guitar with the ney flute of Levitt along with both acoustic bass (Avital) and electric - the second half of the tune features Lindner's sparkling Fender Rhodes sound.  Turner appears on 2 tracks paired on the front line in each instance with Cohen's trumpet.  "Alona" is a ballad with a dramatic overture that leads to a soft yet intensely heartfelt melody played by Turner who build his fine solo slowly.  Cohen, whose playing has matured greatly over the last decade, takes the tune out with a short but strong statement. They pair up again on "Sa'aba"; here, the tune rises on the funky rhythms but without overheating. Turner can certainly be quietly "intense" as can Cohen. "Rumba Pa'NYC" is a drum workout that features Rodriguez, Martinez, and Yosvanny Terry on vocals and percussion - in fact, along with Freedman's trap set, they are the only performers on the first half of the track.  Linder, Ms. Ndegeocello and Cohen enter and the piece really catches fire.

Daniel Freedman wrote or co-wrote and/or arranged all the pieces on "Bamako By Bus" yet rarely takes the spotlight.  The variety of styles as well as the excellent rhythm section (not to forget the fine solo work) makes this music so highly enjoyable.  For more information, go to www.danielfreedman.net.