The Firehouse Goes" Fluorescent" + Reunion of the Spirits

Alto saxophonist, composer and conceptualist Steve Lehman (Wesleyan University, class of 2000) returns to Connecticut on Friday April 16 where he and his Trio - drummer Damion Reid and bassist Chris Tordini (subbing for Matt Brewer) -  to perform at Firehouse 12, 45 Crown Street in New Haven. They will be in the midst of an East Coast tour celebrating the release of "Dialect Fluorescent", their explosive new CD on Pi Recordings.

In his youth and college days, Lehman studied with both Jackie McLean and Anthony Braxton.  Over the past decade, he has developed into one of the most fascinating composers and musicians on the contemporary scene.  During that time, he's worked alongside pianist Vijay Iyer and drummer Tyshawn Sorey in Fieldwork, has been studying composition at Columbia University in New York City with French composer Tristan Murail, played with bassist Stephan Crump as well as alto saxophonist Rudresh Mahanthappa and toured with various sized ensembles.  Yet, this new recording reminds me a lot of Trio Air, the collective of saxohonist/flutist Henry Threadgill, bassist Fred Hopkins and drummer Steve McCall.  And, it's not imitation; I hear it in the "conversations" between the instrumentalists, in Damion Reid's wonderful sense of drive and propulsion, in the full tones of Matt Brewer's bass notes and in the tart, crystalline sharp, tone of Lehman's alto saxophone.

It's no surprise that the Trio covers the Anthony Newley/Leslie Briscusse composition "Pure Imagination" or that one of the leader's originals is titled "Alloy."  Lehman challenges his band mates to think beyond the cliche and engage him in this "triologue" that does not eschew tradition but recognizes so many musical styles and allows to filter into the music.  John Coltrane's "Moment Notice" is fueled by the Reid's juggernaut drums, Brewer's propulsive yet melodic bass work and the leader's contemplative then fiery alto playing.  He reacts to Reid's drumming by embracing the fire and then playing against it.  The twisting and turning solo bass that opens Lehman's "Fumba Rebel" leads into a bass-drum dialogue with Reid and Brewer "talking" together. When Lehman enters, the conversation beneath him opens up to allow his input.  The trio absolutely "smoke" Duke Pearson's "Jeanine", Reid's brushwork as active and multi-directional as his work with sticks.

This music, either on record  or "live" in performance, is insistent, demanding on both listeners and performers, and quite exhilarating.  Damion Reid's playing is exceptional, made more so by the fact that bassist Matt Brewer equally impressive bass does not always supplant the drums as timekeeper. Yet, the music rarely stops moving forward; one has to believe that is Steve Lehman's vision, to continually move and change, like a strong river current that is always changing shape but never losing sight of its ultimate destination.  To find out more, go to www.stevelehman.com or to pirecordings.com/artist/Steve_Lehman.  For ticket information and availability, go to firehouse12.com or call 203-785-0468. 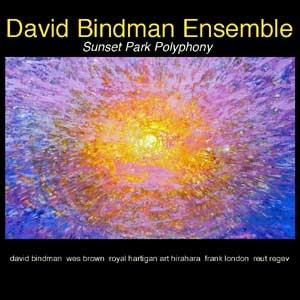 The cover of the self-released 2-CD set from the David Bindman Ensemble  is the first clue to the musical experience the listener will enjoy on "Sunset Park Polyphony."  The brilliance of the sun draws you in to the center of the painting; yet, one should also notice that there are no dark shadows or ominous clouds.  Don't expect "new-age" noodling from saxophonist/composer Bindman (Wesleyan class of 1985, M.A. 1987) but an intense yet finely shaded group of pieces that illustrate his interest in African music and the exploratory jazz work of Bill Dixon and Bill Barron.  The rhythm section features fellow Wesleyan travelers royal hartigan (drums, percussion) and Wes Brown (bass), both of whom he has continued to play with over the quarter-century since graduation.  Pianist Art Hirahara, a native of the San Francisco Bay Area who moved to New York City nearly a decade ago, is a welcome voice in this music as he creates many different colors and never sounds intrusive.  Trombonist Reut Regev, who has worked with Anthony Braxton, Taylor Ho Bynum and Metropolitan Klezmer, adds burr and bite to the mix while the declamatory trumpet of Frank London (The Klezmatics) is a fine foil to the rounder tones of the saxophone.

Disk 1 is comprised of 4 longer pieces opening with the hard-driving "Shape One."  The song has great drive (excellent work from hartigan) and a melody that works off the percussion.  The interaction of the brass with Bindman's tenor and the chords behind the tenor solo remind me of Andrew Hill in his Blue Note days.  The title track is, admittedly, influenced by South Indian rhythms, moving from an opening section without metric time to a thematic section with multiple meters.  The drum solo, which sounds like hartigan using only his hands (and foot on the high-hat) in the beginning, is involving as is the tenor solo that follows, with several phrases that refer to the South Indian beats in the rhythm. Bindman acknowledges the influence of trumpeter/composer Bill Dixon on "Robeson House Echoes", another multi-sectioned piece with more rhythmic excitement and fascinating writing for the front line.  Hirahara's hypnotic piano alongside hartigan's strong ride cymbal work sets the table for the solo section.  London rides the rhythm and delivers an impassioned solo while Regev jousts and spars with the drummer while the pianist adds quiet tinkling noises.  Bindman's episodic music leaves room for exposition and improvisation, moments of silence in the midst of a series of  sonic storms and  strong solos.

I had the pleasure to watch Messrs. Bindman, Brown and hartigan play many times together during their University years.  At the time, hartigan would thrill us with his percussive choices and you can hear how expressive and thoughtful he is throughout this program.  He and Bindman's tenor work well together on "Landings Suite: 1. The Transient", with his African-influenced drumming in conversation with Bindman's somewhat edgy sounds.  After they finish, Brown and Ms. Regev engage in a lively musical exchange.  This piece offers ensemble work, trio interaction and several different tempi. London's rich trumpet work is featured (above the moaning sax and trombone but no rhythm section) on the next section "2. Singing Bird Melody." hartigan's African drumming is the focal point of "4.Invisible Dance", a piece inspired by the poorest people in all societies who are subjugated by their poverty and rendered invisible to most peopel by their economic condition.  Brown joins in as the piece picks up in pace.

Disk 2 also features the handsome ballad "Unspoken", an ever-so-slow work that shows the influence of Charles Mingus - the sparkling yet gentle piano of Hirahara is very effective in setting the mood that is carried on by the reeds and horns. The pianist is quietly expressive on several tracks, his rippling phrases fanning across the music and adding handsome colors.

"Sunset Park Polyphony" is a very personal recording from David Bindman; dedicated to his late mother (who passed when he was in his early teens) and featuring musicians, some of whom he has quite a history with, this music demands your attention.  Intelligent, multi-rhythmic, at turns lyrical or challenging but never dull, this aural experience is worth your attention. For more information, go to www.davidbindman.com.
Posted by Richard B. Kamins at 9:01 PM