Somehow, I forgot this wonderful concert to add to the listing I posted yesterday. Saturday April 28, the Artists Collective, 1200 Albany Avenue in Hartford, presents the great vocalist Sheila Jordan in concert with the Steve Kuhn Trio. Ms. Jordan, who turned 83 this past November, began singing as a young girl growing up in rural Pennsylvania. After moving back to her native Detroit, Michigan, in her teens, she discovered the music of Charlie Parker and began singing with a local vocal trio (material akin to the music sung by Lambert, Hendricks and Ross.)  After moving to New York City in the early 1950s, she married the pianist Duke Jordan (who had worked with Parker extensively during the saxophonist's truncated career.)  Ms. Jordan did not make her recording debut until 1962 when she recorded "You Are My Sunshine" for pianist/arranger George Russell's "Outer View" Lp.  Later that same year, Blue Note Records issued her debut album, "Portrait of Sheila."

Over the next decade-and-a-half, she spent much of her time raising her daughter yet found time to perform in clubs and churches as well as working with trombonist Roswell Rudd.  In the late 1970s, she began working, recording and touring with pianist Steve Kuhn - their 2 recordings for ECM helped to bring Ms. Jordan to a wider audience. She also displayed an affinity for performing in duos with bassists.  She's recorded with Arild Andersen, Steve Swallow, Cameron Brown (a collaboration that continues to the present day) and Harvie S. 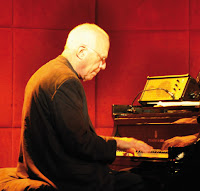 Mr. Kuhn, who is 10 years younger than Ms, Jordan, recorded a pair of ECM Lps with the vocalist that were released in 1979 and 1981 respectively. They reconnected in 1998 and again in 2002 for CDs released on HighNote Records.  Stee Kuhn is one of those rare musicians who at home as both as artist and accompanist. You can hear that the 2 have worked well together over the years; it is most evident in how they feed off each other's energy and how her lines complement his and vice versa.

Joining them will be bassist Steve LaSpina and drummer Billy Drummond.  For more information about tickets, call 860-527-3205 or go artistscollective.org.  To learn more about Sheila Jordan, go to her site at www.sheilajordanjazz.com - here's a link to a recent interview on NPR's "Piano Jazz"; www.npr.org/2011/10/07/120888194/sheila-jordan-on-piano-jazz.  On Tuesday April 24, Chuck Obuchowski of WWUH-91.3 FM will speak to Ms. Jordan about her career as well as the upcoming gig in Hartford.

For more on Steve Kuhn, go to www.stevekuhnmusic.com.He, too, appeared on"Piano Jazz" - the show, from 2007, features the pianist in conversation and duets with the original host, Marian McPartland. Here's the link; www.npr.org/templates/story/story.php?storyId=19054709. The following year, Mr. Kuhn spoke with Jason Crane on "The Jazz Session" - listen by going to
thejazzsession.com/2009/08/28/the-jazz-session-76-steve-kuhn/.
Posted by Richard B. Kamins at 5:33 PM