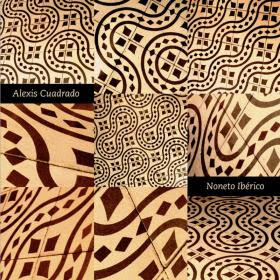 Noneto Ibérico - Alexis Cuadrado (BJU Records) - Composer/bassist/co-founder of BJU Records Cuadrado's new CD (which I previewed in January - read it here) goes into general release on March 1 (digitally) or March 15 (physically).  If you like large ensemble music, Spanish rhythms, excellent arrangements, strong improvisations, and variety, buy this and you should not be disappointed. Besides the leader, the nonet includes saxophonists Perico Sambeat (doubles on flute) and Loren Stillman, trumpeter Avishai Cohen (doubles on flugelhorn), trombonist Alan Ferber, guitarist Brad Shepik, the sterling keyboard work of Dan Tepfer, percussionist Marc Miralta, and drummer Mark Ferber plus the Flamenco handclaps of Israel Suarez, Tomas Moreno and Blas Cordoba (on 4 of the 8 tracks.)

While the music is based on traditional Flamenco song forms, the results are a striking blurring of styles.  After a handsome bowed bass solo that opens "Very Well" (the first track on the disk) and the richly toned alto sax solo from Sambeat, one gets pulled in by the fandango rhythm and the rising melody line. The tension is palpable yet the way the reeds and horns are arranged give the piece warmth. Listen to the drive and forward motion on "Sólo El Sol Sale Siempre Solo" (Solea), another piece that opens slowly and, in this instance, with angular saxophone lines from Stillman and Shepik's distorted guitar lines. There's a blues feeling in the bass line (which is doubled, at times, by Tepfer's acoustic piano.) The "heaviness" of that work stands in sharp contrast to the dancing melody lines of "Tocar Y Parar" (Alegrias), the saxophones moving easily over the handclaps and Mark Ferber's sharp drum work.  The solo section features fine solos from Tepfer and Cohen - they both "swing" but not in an American context but in the declarative Spanish sense (Cohen's growth as a soloist over the past few years in impressive.)  The longest track, "Por la Minima" (Bulerias) clocking in at 17:36), opens with insistent guitar chords, chattering electric piano lines, and a rhythm section in a different tempo.  The tension that interaction creates does not subside when the reeds and brass enter and Cuadrado creates a swift line for one to play off the falling phrases of the other. Halfway through the piece, Sambeat rises out of the insistent chords with a sharply defined solo.  There's a lot to absorb at this point, from the saxophonist's rising intensity to the splendid drum work to the staccato horn lines to the burbling piano.

I'd be happy to talk about the rest of the tracks but you should discover the musical treats for yourself.  The musicianship is as impressive as the expansive compositions; there are harder edges mixed with softer, intensely romantic, flourishes (the ballad "A Tientas" (Tientos) strikes me as a cross between Chico O'Farrill and Gil Evans.) This project, created thanks to a grant from Chamber Music America/"New Works" with support from the Catalan Center at NYU, photographer Dixi Carrillo, and released with the help from investors through Kickstarter, is really quite special.  To find out more, go to www.alexiscuadrado.com.
Here's "Te Sigo (Seguiriya)" courtesy of BJU Records and IODA Promonet:
Te Sigo (Seguiriya) (mp3)

Pianist/composer Ethan Iverson, best known for his work with The Bad Plus, is also a fine writer.  His blog, "Do The Math", is a real pleasure to read for many reasons, especially his interviews and musical observations.  Lately, he's been writing (copious amounts) about the hub-bub over the new book by trumpeter Randall "Randy" Sandke.  (Check it by going to http://dothemath.typepad.com.) Titled "Where the Dark and the Light Folks Meet: Race and the Mythology, Politics, and Business of Jazz" (Scarecrow Press), the book looks at the relationships in jazz that go right back to the turn of the 20th Century especially between Black and Caucasian musicians. Did African Americans get too much credit for the creation of the music? I first read of the controversy on saxophonist/critic Chris Kelsey's fine blog (http://chriskelsey.com/blog/) when he took umbrage to critic Howard Mandel's highly critical response to the book.  Both Kelsey and Iverson write well, with reasoned arguments.  Kelsey pointed me to the Richard Sudhalter's "Lost Chords: White Musicians and Their Contributions to Jazz, 1915-1945" (Oxford University Press), an exhaustive and often exhausting tome that covers similar ground to Sandke's book (which, in all fairness, I have yet to get to read.)
Nevertheless, both musicians are worth reading.

Finally, saxophonist/flutist/composer/conceptualist Henry Threadgill seems to be all over the media lately.  He's on the cover of the March 2011 issue of JazzTimes (and, inside, is the subject of a fine article by David R. Adler - read it here) while Jason Crane devoted a recent episode of "The Jazz Session" to critic Hank Shteamer and the liner notes he wrote to the Mosaic boxset "The Complete Novus & Columbia Recordings of Henry Threadgill & Air." You can hear the episode by clicking here.
In April of 2010, Crane sat down with Mr. Threadgill to chat about many things Zooid and much more - it's also worth a listen, which you can do by clicking here.
Posted by Richard B. Kamins at 6:51 PM