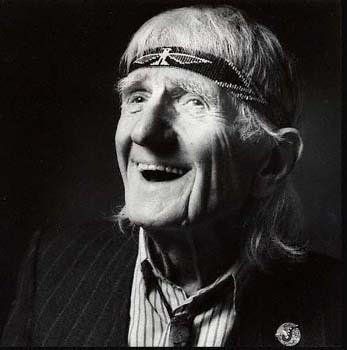 Among the great recordings that helped initiate my ears to the joys of jazz was Miles Davis's "Sketches of Spain."  First issued in 1960, the recording paired the mercurial trumpeter with arranger/composer Gil Evans (pictured left) on a program of Spanish music from the pens of Manuel de Falla and Joaquin Rodrigo (as well as one of Evans' compositions.)  Evans utilized a large orchestra with as many as 14 brass players, 5 reed players, a harpist, acoustic bass and kit drummer.  "Beautiful" and "haunting" are good words to describe the results of their collaboration - Davis and Evans would go on to release "Miles Ahead", "Quiet Nights",  and "Porgy and Bess" - they had first worked together in 1949 on Davis's groundbreaking "Birth of the Cool" but their 4 releases on Columbia found great popular success.
All that leads into an email I received earlier today (reproduced below.)  This looks and sounds like an exciting adventure, one that should appeal to fans of Evans' unique approach to jazz and contemporary music.

Newly Discovered, Un-Recorded Works by Gil Evans Brought to Life
February 2011 Launch - March 13, 2011 Kick-off Concert in NYC
CD Release on May 13, 2012, Evans' 100th Birthday
"It's been a dream of mine to hear new Gil Evans works unearthed because I learn so much every time I hear his music. I don't know anybody who knows Gil's music better than Ryan and I can't wait to hear this music realized." - Maria Schneider

Next year will be the 100th anniversary of Gil Evans' birth, and the Centennial Countdown begins on February 16, 2011 when composer/producer Ryan Truesdell launches The Gil Evans Centennial Project (GilEvansProject.com) with the assistance of fans, friends, and musical colleagues, powered by an ArtistShare® experience.
While many centennial milestone celebrations involve collections and selections of greatest hits from the past, this centennial celebration brings to light newly discovered compositions. Most people know of Gil Evans' work with Miles Davis, but combining all of Evans' work with Davis accounts for only a few years out of a five-decade career. "Gil was an amazingly prolific composer and arranger. I saw thousands of pages of music manuscript, more tunes than I could count. As I went through this music, I started to realize that so many of these were never recorded or were heard live only a few times," explains Truesdell, the first person outside the Evans' family to have been granted full access to the musical archives.  As Miles Evans says: "I'm very excited about this project, and I'm behind Ryan Truesdell 100%.  He's a very talented young man, an excellent musician who has taken the time, and has the talent, to pull this off."
Having sifted through stacks of music, some full scores, some just sketches, Truesdell has selected works that will give participants and listeners a look at Evans' musical world before and after his collaborations with Miles Davis. Among the works to be recorded for the first time are a number of pieces dating back to Evans' work in the late 1940s with the Claude Thornhill Orchestra, a few works written for singers including one originally arranged for an Astrid Gilberto album but never used, and never-before-heard works for a 24-piece ensemble that includes oboes, bassoons, French horns and percussion. This project will bring Evans out of the shadows, show him to be the pioneer that he was, and shine a new light on his legacy as a 20th century composer and orchestrator.

The Gil Evans Centennial Project provides an opportunity for fans and aficionados, students and professional musicians, to all join together in bringing the music of Gil Evans to life. What could be a better birthday present?

Fan-funded projects, a concept pioneered by ArtistShare®, not only support works of artistry, they provide participants with a behind-the-scenes view of the creative process. Through online audio, video, and journal entries, project participants will share the journey as Truesdell finds Evans' music, documents and compares the scores and sketches, applies deductive reasoning to prepare tempi, style and approach, and rehearses the band. Along the way, interviews with experts such as Evans' biographer Stephanie Crease, composer Maria Schneider, members of the Evans family, musicians who worked with Evans, and others who have been deeply influenced by his work will provide depth and historical context by sharing their experiences and insights. The project will continue with the recording, mixing and final release of the CD on May 13, 2012, Evans' 100th birthday.

Truesdell, who was co-producer of Maria Schneider's award-winning album Sky Blue, is not only spearheading the project, but he will personally conduct the orchestra in live and recorded performances and produce the CD. A full range of participant levels is available from the $12.95 Download Participant to the $25,000 Executive Producer. Of special note is the $125 Composer Participant level that includes access to six audio lessons analyzing specific aspects of Gil's scores. Additionally, a brand new participant offer is still being designed that would enable schools, organizations, or even local communities to bring Truesdell to town where he would hold master classes and/or workshops as well as conduct a local ensemble in a concert of Evans' music, just as he did during the out-of-town preview concert that took place on February 17th at the Eastman School of Music in Rochester, NY.

Participation in The Gil Evans Centennial Project is available exclusively through ArtistShare®, a company noted for its groundbreaking approach to connecting fans with the creative process.

To participate, go to: http://www.artistshare.com/projects/project_experience.aspx?ProjectID=376&artistID=279&salesTypeID=6

"[Gil] never wasted a melody, he never wasted a phrase. Students will discover him. They'll have to take his music apart layer by layer. That's how they'll know what kind of genius he was."- Miles Davis

ABOUT RYAN TRUESDELL
Composer - Producer - Educator
Ryan Truesdell is a composer of diverse musical tastes and influences with a healthy reverence for jazz tradition and an ever-broadening sonic palette. He received his Masters degree in Jazz Composition from the New England Conservatory and immersed himself in a broad range of musical styles while studying composition with Bob Brookmeyer and Lee Hyla. He composes and arranges music for an eclectic variety of ensembles ranging from small ensembles to big bands, wind ensembles to string quartets. Recent commissions include arrangements for trumpeter Ingrid Jensen with the U.S. Air Force Band of the Pacific, new music for pianist Frank Kimbrough with the University of Minnesota's Jazz Ensemble, and a new piece for Bob Brookmeyer's 80th birthday concert at the Eastman School of Music. Ryan was also awarded the First Music commission from the New York Youth Symphony's Jazz Band Classic, and conducted its premiere at the Allen Room at Jazz at Lincoln Center in 2009.
As a producer, Ryan has already distinguished himself as a valuable resource in the studio.  In 2004, he served as production assistant for Maria Schneider's record, Concert in the Garden, which won a Grammy award for Best Large Jazz Ensemble.  He co-produced Schneider's next recording in 2007, Sky Blue, which has received unanimous praise including "Jazz Album of the Year" from the Village Voice Critics Poll, a Choc Award from Jazz Magazine in France, and a five-star review from DownBeat in 2007 (one of only two albums to receive that honor). Sky Blue was also nominated for two Grammy Awards, and won the category of "Best Instrumental Composition" (Cerulean Skies).  Most recently, Ryan traveled to Hamburg, Germany to produce a recording with Bob Brookmeyer and the Norddeutscher Rundfunk (NDR) Big Band, including both new and old works from Bob's catalog.