New Music from 5 and from 1

Over the decades of his career, Steve Coleman, alto saxophonist, composer, conceptualist, MacArthur Fellow, has taken his curiosity far afield, creating music that blends rhythm and melody in ways that are hypnotic and highly appealing. The Chicago, IL, native has absorbed the musical lessons of Charlie Parker, the live lessons of fellow alto player Bunky Green, and tenor master Von Freeman, what he learned in the bands of Cecil Taylor, Sam Rivers, and Dave Holland (to name but three) and created music whose home is in the African Diaspora and the streets of American cities. Since signing with Pi Recordings in 2010, Coleman has issued six albums that feature several different-sized ensembles.  His main musical vehicle is Five Elements, an ensemble that now features Jonathan Finlayson (trumpet) and the amazing rhythm section of Anthony Tidd (electric bass) and Sean Rickman (drums). 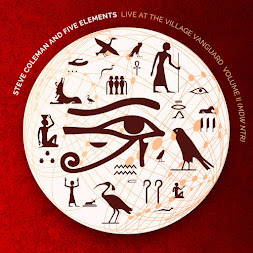 In 2018, Pi released "Live at the Village Vanguard Volume I: the Embedded Sets", and two-CD set recorded in May of 2017. That album featured a fifth Fifth Element, guitarist Miles Okazaki.  12 months later, the band returned to the Vanguard with the spoken word genius Kokayi in the place of the guitar.  11 songs from that three-night stay can now be heard on Coleman's seventh album for the label "Live at the Village Vanguard Volume II (Mdw Ntr)".  The combination of the vocals and instrumental voices is, at times, astonishing as Kokayi is right on the rhythm, interacting with Coleman and Finlayson's melody lines, Tidd's thunderous yet melodic bass lines, and Rickman's powerful, conversational, drums.  Coleman's alto leads the way but everybody's voice is heard.  Finlayson has developed into an excellent front-line partner; whether the piece is totally improvised (such as disc #1's "Unit Fractions" or Bunky Green's "Little Girl I'll Miss You"), the trumpeter builds delightful solos off of the leader's rapid-fire solo phrases.  Another highlight of the Green piece is Kokayi's interaction with the leader's alto. 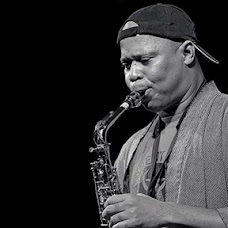 Thanks to the rhythm section, this music is always moving. Not only do Tidd and Rickman act as the foundation but they both, at times, interact with the soloists.  Because Coleman builds these pieces around shapes and symbolism (from Egyptian hieroglyphics), the melodies the sax and trumpet create often sound static but the bassist and drummer keep the music interesting. Kokayi is often the spark plug –– his social commentary on "Pad Thai –– Mdw Ntr" locks in with the bass line and the solid drumming and making one leap out of their seat!
Happily, there's no let up on disc 2. In fact, "Rumble Young Man, Rumble" may be the best cut on the entire album.  Not only is the rapid-fire groove irresistible but Kokayi's lyrics have moments of sheer hilarity (something to do with "bichon frieses in the jungle with labradoodles") as well as social commentary about how dangerous walking the streets is for young Black men as well as the description of a boxing match.   All the while, Rickman is a thundering presence; like rush hour in downtown Manhattan, there's no escaping his presence. (Notice how Coleman uses the repeated 12-note phrase of the song as the opening salvo of "Khet & Kaba" and variations of the same for the melody).

"Steve Coleman and Five Elements: Live at the Village Vanguard Vol. II (Mdw Ntr)" is powerful modern music.  Steve Coleman utilizes ancient codes and artwork to create explorations of 21st Century Black Music that is as intelligent as it is funky.
For more information, go to https://m-base.com/.  To hear more and to purchase the album, go to https://stevecoleman.bandcamp.com/album/live-at-the-village-vanguard-volume-ii-mdw-ntr.
Here's the afore-mentioned "Rumble Young Man, Rumble": 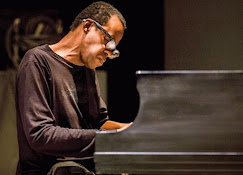 Pianist and composer Matthew Shipp is one of the busiest musicians you'll ever meet. Even though he has cut down his live appearances (as did the pandemic), he records with his own group, co-leads other ensembles, and appears on other people's recordings.  When he records a solo piano album, one can hear a dizzying number of musical references, from 20th Century Classical music to avant-garde jazz to blues to, by his own admittance, the influences of Bud Powell and Bill Evans.  Critics and reviewers call it jazz but that word is not quite right –– you can call it Black creative music or just music. 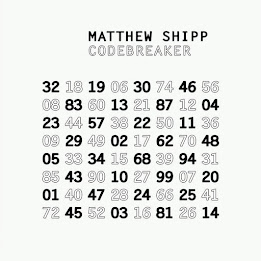 His new album, "Codebreaker" comes to us via TAO Form, the label started last year by drummer (and Shipp collaborator) Whit Dickey.  11 songs spread across 45 minutes, all but one under five minutes.  The music blends melody, rhythm, hypnotic phrases, introspective moments, and more into a mesmerizing program.  Recorded in late July of 2020 in Brooklyn NY's Park West Studios, Shipp creates a world all his own –– this is not background music but a program to explore from beginning to end. There is a science-fiction motif to several of the song titles, e.g "Letter From the Galaxy", Raygun", and "Stomp To the Galaxy".  Yet, the pianist has a sly edge in not giving away any real hint through the names. What is enjoyable is how the music can shift in a heartbeat or stop your heart with its gentle quality; the "blues stomp" that shows up in "Green Man" and the lyrical tenderness of "Suspended".

Find a comfortable chair, put on "Codebreaker", and let the sounds wash over you as well as enter your soul.  If you are a fan of the recorded music of Matthew Shipp, you know to do that. If you are new to his music, you become the person in the album's title, exploring the piano language he creates on eleven pieces. Don't hurry to crack any codes, just take in these sounds, these luminous creations, and enjoy.
For more information, go to www.akamu.net/shipp.htm.  To purchase the album, go to
Here's "Spiderweb":
Posted by Richard B. Kamins at 4:35 PM