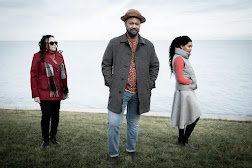 It's been over six years since Nicole Mitchell (flutes, electronics), Tomeka Reid (cello), and Mike Reed (drums, percussion) recorded "Artifacts" for 482 Music. The album was a celebration of the 50th Anniversary of the AACM, the Chicago, IL-based organization that all three are members of. The delightful album featured compositions by original members of the organization plus one by later member, guitarist Jeff Parker.  Ms. Mitchell, Ms. Reid, and Mr. Reed have all been very busy in the intervening years with the ladies joining the expanded Art Ensemble of Chicago while the drummer recorded AEC's Roscoe Mitchell.  They have also continued to play in their own various ensembles. 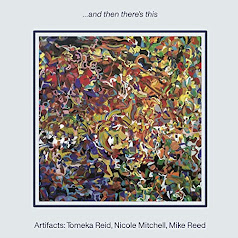 The trio has taken the name "Artifacts". Their new album, "...and then there's this" (Astral Spirits) features seven works by the band members plus one each by Muhal Richard Abrams and Roscoe Mitchell.  The music is, by turns, funky, earthy, improvisational, quiet, devotional, and emotionally rich.  Drummer Reed's "Pleasure Palace" opens the program on a dancing beat and raucous cello before Ms. Mitchell's tears her way through the melody.  "A. F. (dedicated to Alvin Fielder)" is a group piece built off the distorted flute sounds, the rhythm from the cowbell, and the hard-edge cello lines. The track and several others should remind the listener of the 1970s ensemble Air (Henry Threadgill, bassist Fred Hopkins, and drummer Steve McCall).  Ms. Reid shines on Ms. Mitchell's "Blessed", showing the influence of Abdul Wadud on her bluesy pizzicato lines.

There's a large amount of aural variety on these tracks.  The cellist's "In Response To" swings with abandon featuring hearty solos from the trio while her "Song For Helena" is a stunning ballad, the rich tone of the flute meshing with the full-toned arco cello before the drummer sets a gentle pace with his brushes for Ms. Mitchell's graceful solo.  Muhal's "Soprano Song" jumps out over the solid rhythm section, the flute leaping atop the propulsive rhythms.
The program closes with the "get down funky" rhythms of Roscoe Mitchell's "No Side Effects"  – while Mr. Reed keeps the song the grooving, Ms. Mitchell and Ms. Reid dance around each other. Te music gets pretty "sweaty" in just 2:27.  "...and then there's this" is a delight from start to finish.  In just 39 minutes, Artifacts trio will make smile many times, maybe even get up and dance as well. Kudos to Nicole Mitchell, Tomeka Reid, and Mike Reed for creating one of the finest albums of the past several years!
To hear more and purchase the album, go to https://astralartifacts.bandcamp.com/album/and-then-theres-this.
Here's the opening track:
Here's a link to a live date from earlier in 2021:
www.youtube.com/watch?v=hMnbuGVMuFM.

Guitarist Lionel Loueke hails from Benin in West Africa and first came to the United States in the mid-1990s. Since completing his studies at the Berklee College of Music (Boston, MA) and the Thelonious Monk Institute (Los Angeles, CA), he has been one of the busiest musicians on the planet. Not only did he co-found the trio Gilfema but also worked and recorded with Herbie Hancock, Jack DeJohnette, Terence Blanchard, Esperanza Spalding, Dave Holland, and Gretchen Parlato (and many others) plus he's recorded nine albums under his own name. 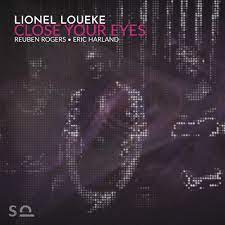 In 2017, Loueke went into the studio under the auspices of Newville Records to record an album of standards with bassist Reuben Rogers and drummer Eric Harland. Released in 2018 as vinyl-only, the recording (with three extra tracks) has now been issued on CD and as a download by Sounderscore.  The label, owned by bassist (and Gilfema member) Massimo Biolcati, hired David Darlington to do the mixing and mastering; the sound quality is suberb! The 11-song program features two tunes each by John Coltrane and Thelonious Monk as well as pieces by Miles Davis, John Coltrane, Wayne Shorter, Henry Mancini, Hoagy Carmichael, Richard Rodgers, Bernice Peterke ("Close Your Eyes"), and Johnny Green ("Body and Soul"). At times, the music sounds like a tribute to Jim Hall but the unpredictability of many of the arrangements plus the freewheeling rhythm section puts the album in a class by itself.

Check out the Caribbean-inspired "Skylark", the percussive guitar playing the melody over bass counterpoint and playful percussion; the long fade reminiscent of Charles Lloyd's "Forest Flower".  There's an atmospheric take of "Moon River" with minimal drum backing as well as a lovely reading of "Body and Soul" –– Rogers's resonating bass accompaniment and Harland's hand drumming serve to set off the lyrical guitar playing.  The trio swing the daylights out of the album opener, "Footprints" followed several tracks later with a delightful romp through "Blue Monk".
Come to "Close Your Eyes" for the strong guitar work of Lionel Loueke but chances are very good you'll really get into the inventive and fun playing of Reuben Rogers and Eric Harland.  O, what sounds await the eager listener –– dig in, dive in, and enjoy!
For more information, go to www.lionelloueke.com.  To purchase the album, go to https://lionelloueke.bandcamp.com/album/close-your-eyes.
Go ahead, dig you some T. Monk:
:
Alto saxophonist and composer Aakash Mittal, born in Texas to a New Delhi native father and Nebraska-born mother, is a busy writer, educator, traveler, and musician.  His journeys has taken him throughout the United States, India, Mexico, and elsewhere. Mittal has won many commissions as well as fellowships, recorded with Amir elSaffar, Dennis Gonzalez, and Ravish Momin plus he has self-released four recordings as a leader.  He leads various groups including a Quartet and now the Awaz Trio. The latter ensemble includes Miles Okazaki (guitars) and Rajna Swaminathan (mrudangam and kinjara). 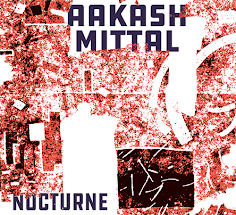 That trio has just issued its debut album. "Nocturne" (self-released); the program includes the five-part title track, a three-part "Street Music", and an "Opening".  The 82-second "Opening" starts with a lecturer speaking about oral tradition then Ms. Swaminathan enters;  the warbling alto sax line and expressive guitar play a short melody that leads directly into "Nocturne  I" –– the music for the album is based on Mittal's journey to Kolkata, India, to study Hindustani evening and night ragas. One can hear the influence of raga music in Mittal's linear phrasing while both guitar and murdangam (often spelled "mridangam") add the rhythmic base.  After that short piece fades (2:34), a field recording begins with hand-held percussion dancing through the speakers; the musicians do a short interpretation before the street musicians reenter. 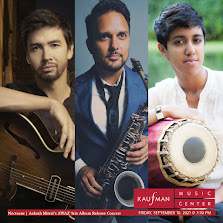 As the album sweeps along, one can hear how the sounds of the Indian city influences the music.  While the title suite is more lyrical, it's not a typical Western classical nocturne but certainly a fine illustration of a warm evening in Kolkata or Mumbai.  "Nocturne IV" is a quiet three-way conversation, like three friends walking at 3 a.m. through the city streets.  There are moments of dissonance but, mostly, the piece draws the listener in and leads through unfamiliar yet friendly territory. Okazaki's solo shines while the often-quiet percussion follows the path of the melody. The last section of the suite ("V") jumps from the very start, featuring great accompaniment, powerful interactions, and a rippling saxophone solo that bounces atop the guitar's lower notes and the rapid-fire drumming.  Mittal's playing is alive, swift melodic phrases blended with short fragments. 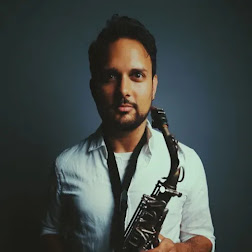 The album closes with the high-powered "Street Music III" with just the trio playing the music of the parade band moving through the streets. Mittal's melody is locked in with the percussion and the guitar chords, moving decisively and powerfully to the close.  When you listen to "Nocturne", you need to stow away your "Western Music" ears and surrender to a music that ties with serious roots in an ancient culture and the lively madness of contemporary life. Aakash Mittal has composed a number of pieces about Indian street life for previous albums; yet, these acoustic pieces illustrate how he has grown as composer, interpreter, musician, and human being.
For more information and to check out his previous work (an earlier version of Awaz Trio featured Rez Abbasi on electric guitar), go to www.aakashmittal.com.  To hear more and to purchase the album, go to https://aakashmittal.bandcamp.com/.
Here's "Nocturne I":
Posted by Richard B. Kamins at 3:51 PM