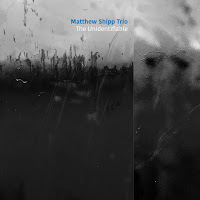 Pianist and composer Matthew Shipp turns 60 years old in early December and remains one of the busiest, most creative musicians on the Black Music scene.  His current Trio––bassist Michael Bisio and Newman Taylor Baker––is, arguably, his finest ensemble while his music continues to expand.  The band's new album, "The Unidentifiable" (ESP Disk),  captures one's ears and mind from the opening seconds of "Blue Transport System" and refuses to let go until the 10:31 "New Heaven and New Earth" fades to silence. Even then, moments return in snatches of melody, sounds, and beats.  Upon first listening, you might think Newman Taylor Baker's splendid drumming is the reason to return. Perhaps it's Michael Bisio's powerful and often melodic bass work or the muscular piano, long flowing phrases, or thoughtful compositions that the leader supplies that turn your head. In fact, it's all three and more.

I've learned to listen to a new Matthew Shipp Trio all the way through each time. This is not music you "cherry-pick" your favorites and ignore the rest.  Listen to how the rhythm section goes its own way on "Phantom Journey" or provides a gentle cushion of colors for the exploring piano lines on "Dark Sea Negative Charge". Baker's trance-like drums go alone on the short "Virgin Psych Space 1" serving as an intro to the trio's reading of "...Space 2".  Note how each music builds on those drums, Bisio's bass weaving in and around while Shipp's piano travels above.

There is a quiet passion pulsing on the above-mentioned "Dark Sea...."; check out the fascinating hard drumming on "Trance Frame" (another short solo piece) and the powerful piano on "Phantom Journey."  The sound of the album, engineered by Jim Clouse in Park West Studios in Brooklyn, NY, is clean and loud.  Te lengthy final track will glue you to the chair, the thick bass tine, dancing snare work, and the ever-exploratory piano lines slowly build to a powerful climax–Bisio's bowed bass and overtones atop Shipp's gently piano melody become a contrast in light and darkness dropping out so the music can close on Baker's subtle brushwork.

"The Unidentifiable" is one more high point in the creative career of Matthew Shipp, not just for the music he composed for the Trio but also for his continued dialogue with Michael Bisio and Newman Taylor Baker.  There is no compromise, no cliches, just a powerful message of creativity in uncertain times.

For more information, go to www.akamu.net/shipp.htm. To purchase the music, go to https://matthewshipp.bandcamp.com.

Pianist and composer Lafayette Gilchrist has created an amazing amount of music, relevant music, over the past three decades.  A resident of Baltimore, MD, since 1987, his music covers a wide swath of territory, from House to Jazz to Hip Hop to Funk to Blues and beyond.  His music has been featured on the HBO series "The Wire" "Treme", and "The Deuce", he's played with the David Murray Quartet as well as drummer Louis Moholo-Moholo, and bassist William Parker.  The pianist gets compared to many keyboard masters, from McCoy Tyner to Willie :The Lion" Smith––his ability to play so any styles reminds this listener of the late Jaki Byard. 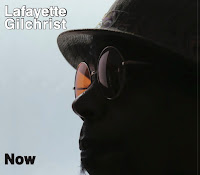 It's been 13 years and myriad experiences since his last Trio album ("3") was issued. "Now" (self-released) has arrived and it's an collection of amazing adventures.  Two CDs, 16 songs (all originals), 150 minutes, and the great rhythm section of Herman Burnie (bass) and Eric Kennedy (drums), the music is an incredible journey.  Opening with "Assume The Position" (first heard on David Simon's "The Wire"), the listener is bowled over by the thundering chords, the rapid-fire drums, and the pounding bass.   Latter on Disk one, "BMore Careful" is a New Orleans-inspired blues that serves a warning and a spotlight for Burnie's handsome arco work. Kennedy's drums and Gilchrist's piano are mixed high and loud making the music jump from the speakers. 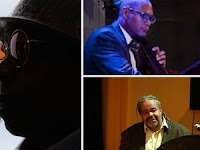 Dig into "On Your Belly Like a Snake", another hard-edged romp. Most of the longer pieces (seven of the 16 tracks are 10 minutes or longer) usually have stretches where the band eases off the intensity but here it's a short break before the drums push the leader to play harder. Disk one closes with "The Midnight Step Rag", a delightful dance with a touch of the Crescent City in Kennedy's drumming and a bouncy piano solo.  You can just about pick out the deep notes of the bass but also listen to the pianist's active left hand.

Disk two opens with the 13:33 "Tomorrow Is Waiting Now (Sharon's Song)", a handsome medium tempo ballad that builds in intensity on the strength of Gilchrist's splendid piano playing.  Burnie creates a fine solo as well and even though Kennedy does not solo, he plays an integral role throughout the piece. The following piece, "The Wonder of Being Here", is a true ballad, a handsome one at that. The bassist shows his melodic side, especially beneath the lovely piano solo.  Later on the disk, "Can You Speak My Language" is a poignant ballad, the two-handed piano playing and Gilchrist's melodic runs seem to nod towards Keith Jarrett.

Disk two and the album closes with "Specials Revealed", a rich melody wrapped in a soulful rhythm. Gilchrist's solo is built off the repeating chords in his left hand and he gracefully moves up the keyboard while Burnie hugs the bass line and Kennedy pushes the rhythm forward.  I understand the title of the song is also the name the leader has given the Trio–that make sense as this is special music. Yes, "Now" is a lot of music to take in all at once, really three good sets of music on two CDs.  But, take your time and do take it all in.  One can hear so much in the music that Lafayette Gilchrist, Herman Burnie, and Eric Kennedy have created for this album.  Gilchrist's collection of songs plumb his own experiences as well as those of his community, reminding us that music not only tells stories but moves us emotionally. "Now" moves, oh yes it moves!

For more information, go to www.sonicbids.com/band/lafayette-gilchrist-music/.

The trio of Geof Bradfield (tenor and soprano saxophones), Ben Goldberg (clarinet and contra-alto clarinet), and Dana Hall (drums, percussion) first met in 2017 at The Hyde Park Jazz Festival in Chicago, IL.  That chance encounter led to "General Semantics" (Delmark Records), recorded a year later.  All three musicians have years of experiences behind them as leaders, co-leaders, or group members (Bradfield and Hall have worked together over two decades)––one can tell from the music that recorded how comfortable they are with each other, willing to push and be pushed into many different musical areas. 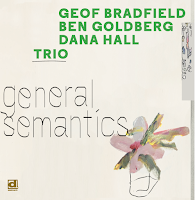 What a splendid sonic journey this is.  Opening with the quiet rush of "Air" (Bradfield on tenor, Goldberg on contra alto, and Hall using brushes), the music dances forward delightfully as the two reed players carry on quite a conversation.  Composed by the late pianist Cecil Taylor and recorded in 1961 by Steve Lacy, the "swinging" track has a timeless feel. "Tioga Street Zenith" is a three-way conversation, a bit more frenzied yet Hall sticks with brushes as the reeds spar and parry.  "Last Important Heartbreak of the Year" may sound like the title of a Country ballad but is really a rollicking tune with New Orleans drumming goosing the reeds right along.  A bit later in the program, "Hit Flip Switch" (from Goldberg's prolific pen) also is a delightful romp, hearkening back to the raucous music of Louis Armstrong and Johnny Dodds. Bradfield's laughing soprano and Goldberg's playful clarinet should tickle one's fancy!

The soprano sax and clarinet combo returns to dance together yet again on Hermeto Pascoal's happy "8 de Agosto"––again, the two reeds weave around each other as Hall kicks and sticks away with glee.  Bradfield's tenor sax introduces the title song which soon drops into a funky beat, Goldberg's contra alto clarinet producing the bass line. The tenor solo is built off that bass line while Hall keeps the tune close to the ground.  "Half The Fun" opens with a "deep" solo from Goldberg over quiet hand-held percussion.  Several minutes later, Hall drops into a modified "jungle" rhythm a la 1920's Duke Ellington, Goldberg plays a slinky bass line, and Bradfield creates a sweet soprano sax melody.

The album comes to a close with "Under and Over" which has a "freer" feel as the tenor sax and drums open the piece in a fiery conversation.  After they stop, Hall drops into a slow, bluesy, beat, Goldberg's clarinet gets the melody while Bradfield acts as the bass line. There's a feel of Julius Hemphill's "Hard Blues" in the sound of the music, in the way the sax and clarinet move together. The piece closes with a classically-inspired clarinet and tenor saxophone duet.

The trio of Geof Bradfield, Ben Goldberg, and Dana Hall reminds us that when like-minded musicians get together, magic can happen.  Magic does happen on "General Semantics"––this delightful and musical recording is well worth your attention!