Michael Moore, a native of Eureka, California, has lived in the Netherlands for nearly four decades.  The clarinetist and saxophonist is celebrating his residency and the art he is creating by issuing three new recordings, all quite different, two of which are reviewed below.  It's also the 30th anniversary of his first release on his own Ramboy Records––that initial album, "Trio Clusone", featured the amazing percussion of Han Bennink and the equally exciting work of cellist Ernst Reijseger, two musicians Moore would spend a decade with redefining the sound of a trio.  Over the years, the label has issued 36 recordings that posit Moore in many different sound ensembles.  He's also spent a number of years performing, touring, and recording with the ICP Orchestra but has never fronted a large ensemble....until now. 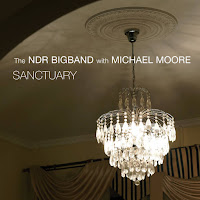 In January 2019, at the invitation of percussionist Marcio Doctor (longtime member of the NDR Big Band),  Moore flew to Hamburg, Germany to spend a week rehearsing and recording with the 18-member large ensemble. The resulting album, "Sanctuary", is a smashing success.  The 10 pieces are all Moore originals pulled from his various Ramboy recordings; the clarinetist also contributed six of the arrangements with two by Henk Meugeert (Dutch composer and arranger) plus one each from Christian Elsässer (German composer and arranger) and Frank Carlberg (American-based Finnish pianist and composer).  Each piece stands outs, not just for Moore's splendid playing but also for the arrangements that frame the melodies and soloists plus excellent support from the NDR players. Drummer Tom Rainey rejoins the band (he has played with the ensemble a number of times before) for the album with trumpeter Tim Hagans picking up the conductor's baton.

The music is so fascinating. The lovely opening of "Brunheiras" opens to a sweet melody yet after the band fills the background, the clarinetist steps aside for a raucous solo from guitarist Sandra Hempel with Rainey driving the band.  "Anomalous Soul", first recorded with pianist Fred Hersch and bassist Mark Helias in 1993, is a handsome ballad with more lovely clarinet and intricate interactions within the rhythm section.  "Fogo von Slack" is a short (2:18) work for the three clarinets of Moore, Fiete Felsh, and Luigi Grasso––there's a classical feel that also has a touch of the work of Jimmy Giuffre.  Felsh (on alto sax) also shines on "Odin" as does the impressive section writing.  Listen all to the simple yet solid rhythm section.  The bluesy "Shotgun Wedding" with its delightful trumpet melody and Moore's smoky alto sax work glides along like a smooth ride on a midnight ride.

Because the music is so good, there is the desire to write about each track. Whether it be the Americana-flavored "Trouble House" or the conversation-laden "Igor" (a tribute to Igor Stravinsky) or powerful yet sweet episodic tribute to the composer's mother (the album's title song) that closes the album, this music has melodic and harmonic power, excellent solos, intelligent arranging, and delightful solos.  "Sanctuary" serves as a refuge to the daily madness, a refreshing bath of sounds to excite your soul.

For more information, go to www.ramboyrecordings.com.


Michael Moore convened his Fragile Quartet for the first time in 2007. Composed of pianist Harmen Fraanje, bassist Clemens van der Feen, and drummer/percussionist Michael Vatcher (who also has worked with Moore in their Jewels & Binoculars Bob Dylan Tribute trio), the ensemble allows the alto saxophonist and clarinetist to create music that can and does go wherever the music wants to go, many times in unexpected and exciting directions. 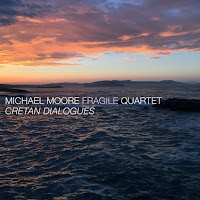 For the Quartet's fifth album––Gerry Hemingway has replaced Vatcher––Moore created 13 songs that serve as a travelogue, an appreciation of natural beauty, and meditations on the Greek god Zeus, photographer Saul Leiter (1923-2013) and the painter Paul Klee (1879-1940). "Cretan Dialogues" opens with "...Dialogue #1" a three-song medley ("Lollapalooza", "Fenix Blue", and "The Meliae" (nurses of the infant Zeus)) that goes through a number of changes and melodic ideas.  The interplay is powerful, especially the work of the rhythm section as they chart new courses for the leader's reeds over the course nearly 16 minutes.  "...Dialogues #2" follows ("Europa", "Doldrums", and "Leaving Paleochora"); the first part really swings with a hint of Kenny Wheeler in the melody before van der Feen introduces the second piece with a slow spare yet effective bass solo. that leads to the clarinet melody over Frannje's supportive chordal work.  After a splendid percussion interlude, Hemingway's cymbals and brush work give way to a lovely piano ballad. "Paleochora" is on the southwestern coast of Crete and the music sees to look back at the town while looking forward to another ocean voyage.

The album continues on with a Brazilian-flavored piece "Eugenia Uniflora" (named for the Brazilian Cherry bush) and the handsome ballad "Pussy Willow."  On the latter track, Moore's breathy alto and Hemingway's conversational drumming lead the way.  One of the album's shorter tracks, "A Little Box of Jazz", is also one of its "freer" pieces with all four musicians engaged in the "chat room".  The shortest track "Slowly, Slowly" closes the program–the bowed bass solo over the solemn piano chords and simple percussion serves as a coda to an album that covered a wide stylistic territory without settling in one.

"Cretan Dialogues" is quite the journey, one that moves the soul and heart of the engaged listener.  Michael Moore remains one of the more creative artists you will hear these days. He uses his Ramboy Records as an outlet for his various projects and you'd be wise to take a listen to his often-absorbing, probing, and exciting works.

Here's the tune to the Brazilian Cherry:

The albums reviewed here will be released on October 2 in the United States.. To listen to and purchase Moore's recordings on Ramboy, go to https://michaelmooreramboy.bandcamp.com.
Posted by Richard B. Kamins at 7:44 AM