Stepping Out From the Rhythm Section

Bassist and composer Eric Revis (pictured left) has got serious pedigree. He's graduated from the school of Betty Carter, has also worked with Steve Coleman, Jason Moran, Lionel Hampton, Andrew Cyrille, and Orrin Evan and Nasheet Waits in the collective trio Tarbaby.  Revis has spent the past 23 years in the rhythm section of the Branford Marsalis Quartet playing alongside Jeff "Tain" Watts and his successor Jason Faulkner. A prolific composer, he has contributed songs to the Marsalis Quartet repertoire and received several prestigious grants and fellowships. 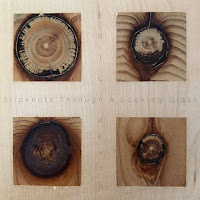 His eighth album as a leader, "Slipknots Through a Looking Glass", is his first for Kris Davis's Pyroclastic Records label. The recording features Ms. Davis on piano plus his "working" quartet of Chad Taylor (drums, mbira), Darius Jones (alto saxophone), and Bill McHenry (tenor saxophone with afore-mentioned Faulkner on drums for two tracks. The resulting music (nine Revis originals, one each from both the saxophonists, and one credited to the bassist, drummer, and pianist) runs the gamut from funk to fiery blowouts to subtle ballads, and never a dull moment. The program opens with "Baby Renfro" (listen below), a serious slab of funk underscored by Faulkner's drums, Ms. Davis's "rhythm guitar-like" piano, and and the leader's thick bass lines.  The overdubbed saxes play a robotic rhythmic line plus there are several slowdowns but most of the piece romps forward.

Faulkner also appears on "Earl and the Three-Fifths Compromise", a slinky piece that features a circular (and hypnotic) bass line, impressionistic piano chords, and a lengthy conversation feature the two saxophones.  It's Taylor's drums that set the torrid pace "Shutter" on which both McHenry and Jones tear a hole in the ozone layer with their powerful, frantic, and raucous solos.  Ms. Davis dances all over the keyboard while Revis rips out a thunderous walking bass line. "Vimen" opens with a bass and drums dialogue before the pianist joins the fray laying down a series of angular lines blended before Jones scrambles atop the rhythm section and leaps into action. When it's his turn, McHenry takes a softer approach but slowly builds towards a powerful climax. 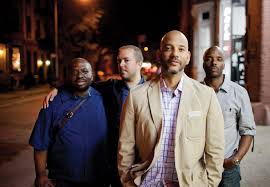 The title track is split in three short parts, all of which features the bassist in both speakers, quiet piano in the background, and a high-pitched but barely intelligible squeals as white noise. The "second" "Slipknots..." leads into "House of Leaves" which unfolds over four minutes of jagged, rubato, interaction before dropping into a slow funky groove and turning into a moody, introspective, work.

The most intriguing song "SpÆ", an improvised work for bass, mbira, and treated piano that flows from Revis's opening pattern and quiet piano figures and the percussive mbira into a more steady pace. Also a three-part work, the music flows from section to section seamlessly. The trance-like effect of the overdubbed mbira takes over the final moments slowing down with the bass to the fade.  McHenry's lovely ballad "When I Become Nothing" features the band moving forward together with only Ms. Davis moving around the two saxophones.  While not a conventional ballad, the music has a subtle beauty and a yearning quality.

"Slipknots Through a Looking Glass" continues the impressive body of music that Eric Revis has produced over the past two+ decades.  The sound quality of the recording is quite impressive as you can clearly hear all the voices, even when there is a lot of noise.  This is neither simple music nor "art-for-art's-sake" but true creative Black American Music.

Who better than drummer, composer, educator, and impressive human being Matt Wilson to bring a smile to one's face in the midst of the pandemic.  From a distance––a socially responsible distance––he and his musical cohorts (reed man Jeff Lederer, cornetist Kirk Knuffke, and bassist Chris Lightcap) have conspired to give a musical "Hug!" (Palmetto Records). And, darned if we don't need a big one (hug, that is) plus a reason to smile through our collective fears and worries. 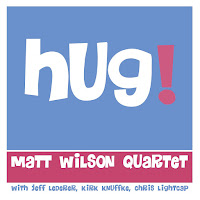 It's been six years since the MWQ released an album of its own––the members all appeared on Wilson's 2016 "Beginnings of a Memory" album as part of his Big Happy Family ensemble. The band's 2014 recording, "Gathering Call", also featured pianist John Medeski but "Hug!" is just the four musicians making their own fun.  The 11-song program opens with Gene Ammon's rollicking "The One Before This", a joyous "blues shout" that features solid bass work, crashing drums and cymbals, and stand-out solos from Lederer (tenor sax), Knuffke, Lightcap, and the leader.  Everybody gets loose so the audience can sit back and rest assured the music will be top-notch!

Off they go into a collection that features pieces by Abdullah Ibrahim ("Jabaloni"), Charlie Haden ("In The Moment"), Dewey Redman ("Joie de Vivre"), five Wilson originals, one riotous collaboration with Sun Ra ("Space Force March/Interplanetary Music"), and a Wilson favorite from his youth, Roger Miller's "King of the Road". If you are a long-time Wilson fan, his choice of material shouldn't surprise but the Miller tune stands out for its delightful....well...."joie de vivre".  Lederer's clarinet leads the way, Knuffke gets a short solo, Lightcap contributes the foundational bass line while Wilson's subtle percussion sets an ambling pace––his "tap dancing solo near the close will are you smile even wider.

Another surprise is the presence of the voice of President Donald Trump. He's there to announce the Space Force initiative as the band contributes a Charles Ivesian background and then break into the "Space Force March" as the President serves as counterpoint to the musical mayhem. The Quartet then segues into Sun Ra's "Interplanetary Music" (hear the original) and creates a pastiche of bouncy blues riffs with a touch of New Orleans.  They sing Sun Ra's lyrics while the President interjects his "Space Force" words.

There are plenty of other highlights.  Wilson's "Every Day With You" is a lovely ballad, heartfelt, emotional, and richly melodic. "Sunny & Share", also an original, may be a tribute to the 1960s hitmakers but, in reality, it's a raucous and rapid melody line punctuated by short solos from each member of the band.  The title tune (listen below) may just bring Herb Alpert and the Tijuana Brass to mind. Complete with a string accompaniment (all parts arranged and performed by Matt Combs, a Nashville, TN-based fiddler), the piece is quite sweet and deserving of its title.

"Hug!" closes with the aptly-titled "Hamba Kahle (Goodbye)"––the title is from the Zulu language and the music hearkens back to the sounds of Abdullah Ibrahim.  The solid drumming, the dancing electric bass line, the sweet melody line (from the drummer), and the gentle fade all serve to close the album on a hopeful note.  Having attended numerous performances by Matt Wilson either in a leadership role or as a sideman, his music and playing are often imbued with joy.  He can be silly, and irrepressibly so at times, but he is always serious about making good music. The music of the Matt Wilson Quartet obliterates borders, ignores genres, and embraces melody and improvisation. You should partake of this bounty!