Mike Fahie is a multi-faceted artist: he plays trombone, composes, arranges, plays in several large ensembles as well as having played Broadway shows, and teaches at both the New England Conservatory of Music in Boston, MA. but also is on the faculty of United Nations International School. He's recorded with Darcy James Argue, Pedro Giraudo, Andrew Rathbun, and others. He's recorded two albums with all-star Quintets and now has his initial large ensemble album. 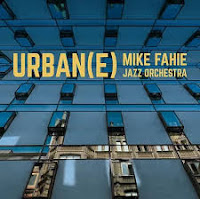 "Urban(e)" (Greenleaf Music) brings together the worlds of classical music and jazz, filters pieces by Chopin, Puccini, Stravinsky, Debussy, Bartók, Tchaikovsky, and JS Bach through Fahie's creative mind and is translated by an 18-piece Jazz Orchestra.  While many listeners may familiar with pieces such as "Nessum Dorma" (recorded by the likes of Jeff Back, Aretha Franklin, and Deep Purple with Luciano Pavarotti) and "The Firebird", it's fun to hear how those songs sound played in these settings. In fact, the Stravinsky piece mentioned just above is one of the highlights of the recording not only for its brilliant writing but for the fine solos by pianist Randy Ingram, tenor saxophonist Quinsin Nachoff, and a lovely conversation between Fahie (euphonium) and Jennifer Wharton (tuba). 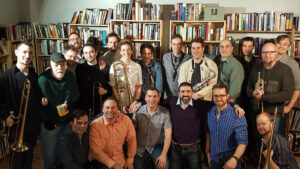 Other fascinating turns include the hard rocking center of Bartók's "String Quartet No. 1, III. Allegro vivace".  Jeff Miles' slide guitar leads the ensemble into that––when the barrage of sounds conclude, the band into a Brechtian tango before rocking out once more.  A gentle entry into the sound world of Tchaikovsky's "Symphony No. 6, II. Allegro con grazia" leads to a playful waltz. Cinematic in scope, the music flows up and out of the speakers leading to delightful solos by Aaron Irwin (alto saxophone) and Nick Grinder (trombone). 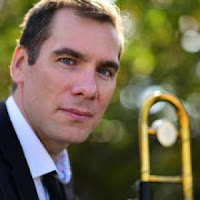 The album concludes with Bach's "Seufzer, Tränen, Kummer, Not" (sighs, tears, grief, need) from "Cantata, BWV 21" that Fahie first heard on a recording by the great soprano Kathleen Battle and Wynton Marsalis.  The ensemble pays respect to the original then breaks into a long conversation between the leader (on trombone) and David Smith (trumpet).  Near the close of the piece is a terrific give-and-take between the sections led by the trumpets.

"Urban(e)" is truly an aural treat. Whether you know the original pieces or not, the creative arrangements of Mike Fahie posits you in the midst of the Jazz Orchestra.  This music is emotionally moving and, at times, a real romp.  Just let the sounds flow over you and your day will be better for it.

For more information, go to www.mikefahie.com. To listen to more and to purchase the recording, go to https://mikefahie.bandcamp.com/album/urban-e.

Music by Claude Debussy for your ears––check out the video on the Bandcamp page):


Pianist, composer, and arranger Manuel Valera, a native of Havana, Cuba, has been in the United States for over two decades. Over that time, he's worked with Paquito D'Rivera, Daphnis Prieto, Arturo Sandoval, Brian Lynch, and many others.  The pianist leads several ensembles including a trio and his sextet the New Cuban Express plus a quintet Groove Square. Valera has issued albums on CrissCross Jazz, MaxxJazz/ Mack Avenue, and his own label Mavo Records. For his latest project, the artist has expanded his sextet to 19 members plus vocalists Camilla Meza (three tracks) and Sofia Rei (four tracks) , thereby creating the New Cuban Express Big Band. 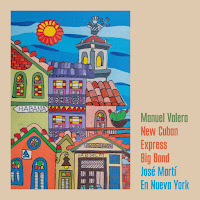 "José Marti en Neuvo York" (Greenleaf Music) contains seven Valera originals based on nine poems from "Versos Sencillos" (simple verses), the collection that the great Cuban writer (1853-95) wrote during his time in the New York City area (he spent nearly 15 years in the US) and published after his death.  The combination of bubbling percussion, melodies built on traditional Cuban pieces, the colorful section arrangements, and the splendid vocals, this music comforts, excites, holds your interest from beginning to end, and features excellent musicianship.  Valera, who can burn on the keys like few others, reins in his formidable chops to allow the ensemble the space to develop strong solos. 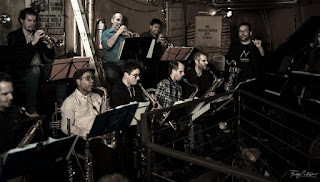 The album opens quietly with "Odio La Mascara Y El Vicio" (I Hate the Mask and Vice)––after Ms. Meza completes the verses, the tempo picks up, pushed by the powerful rhythms by drummer Jimmy Macbride and veteran percussionist Samuel Torres.  When the vocalist returns, now over the faster tempos, the music takes a powerful turn.  Ms. Rei steps out on the next track, "Es Rubia, El Cabello Suelto" (She is Blonde: loose hair); her voice seems to rise out of the ensemble especially as she sings a wordless vocal along with the brass and reeds.  A melodic electric bass solo by Pedro Giraudo opens "El Enemigo Brutal" (The Brutal Enemy) supported only by the hand percussion of Mauricio Herrera and the synthesized strings of the leader before Ms. Rei steps into the tale of an ugly war, her husky voice a fascinating contrast to the sharp brass and bright reeds. The gentle flow of the medley "Yo Quiero Salir Del Mundo / Yo Pienso Cuando Me Alegro" (I Want to Leave the World/ I Think, When I'm Glad) grows slowly but surely in intensity as more instruments are added. Ms. Meza enters after a short alto saxophone statement and glides through the vocal. Valera employs the same melody as the first section for the second poem in the melody. Here, the vocal is doubled by guitarist Alex Goodman giving the piece a shimmering feel.

The album closes with the rhythmically exciting "Si Quiere Que De Este Mundo" (If You Want From this World) that features Ms. Rei taking the lead and also joining the ensemble with her wordless vocals.  Valera takes a fine, playful, solo over the rest of the rhythm section followed by an exciting trumpet solo (no credit) and the a rousing spot for baritone saxophonist Andrew Gutauskas.  Macbride and Torres's percussion interchange leads the ensemble back in for an intense finish.

"Jose Marti en Neuvo York" is an intelligent and exciting musical experience fueled by the experiences of the Cuban poet early in the final decade of the 19th Century.  Marti, a vocal advocate and fund-raiser for the independence of his homeland, created these works in exile and the writings speak to the human condition.  Manuel Valera spent many months working on these pieces during the time his wife was battling (and subsequently succumbing to) cancer. The music celebrates his ties to his native country where he first studied piano, composition, and arranging.  Truly a delightful listening experience, this debut recording by the New Cuban Express Big Band is a treat.

For more information, go to www.manuelvalera.com. To listen to more music and purchase the recording, go to https://manuelvaleranewcubanexpressbigband.bandcamp.com.

Here's the opening track (with vocals by Camila Meza):