Music With Many Roots

Drummer Adam Nussbaum has had quite the career. Long associations with guitarists John Abercrombie, saxophonist Stan Getz, bassist Steve Swallow, the Brecker Brothers, Dave Liebman, and many others have proven to fans and listeners his worth in the rhythm section. He's co-led and co-leads a number of ensembles but until Sunnyside Records issued "The Lead Belly Project" in February 2018, the affable musician had never released an album as a leader. 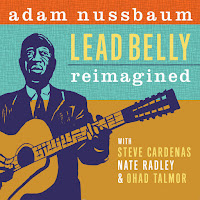 After that album was issued, Nussbaum led his cohort––alto saxophonist Ohad Talmor, guitarists Steve Cardenas and Nate Radley––on several tours and they gelled as a working ensemble.  The quartet's second release, "Lead Belly Reimagined" (Sunnyside), includes eight more songs from the songbook of Huddie Ledbetter (1888-1949), with each member of the group contributing ideas and arrangements.  If you liked the initial disc, you'll love this.  "Princess Elizabeth", a tune written in honor of the wedding of Elizabeth to the future Prince Philip, is a lovely, lilting tune in which the guitarists play the simple but enchanting melody in unison with the alto saxophone.  "Laura" keeps the playful edge and the sprit of the original (on which the composer played button accordion and hopped and hollered)––dig how the leader even plays the melody on occasion plus the delightful, dancing, sax solo.

One of the many highlights is the evocative "Rock Island Line". Nussbaum is the train in the station warming up while one of the guitarists calls "all aboard".  Talmor plays the melody through once and the train takes off.  Pretty soon, the song is up to speed with everybody trying to keep up with the beat until we hear the melody shared by the guitar and sax and the songs comes to its conclusion. Chances are you'll also love the spunky "Shorty George"; with its bouncy New Orleans-inspired beat, Talmor and the guitarists head off in quite a playful manner.  Listen closely to "If It Wasn't For Dicky"––the tune, inspired by an Irish folk song "Drimmin' Down", became the inspiration for "Kisses Sweet Than Wine" adapted by Pete Seeger and Lee Hays of The Weavers. That last tune was a big hit for pop singer Jimmie Rogers in 1957, even winning the GRAMMY Award for "Best Pop Collaboration with Vocal" that year.  Here, the quartet caress the original melody treating it care and love.

"Lead Belly Reimagined" closes with "Governor Pat Neff", who, legend has it, was so impressed by the songs of the prisoner Ledbetter (convicted of murder twice) that he released him before his term had expired––not so, in truth but Neff's song is a playful ditty with rollicking drums. You can hear Adam Nussbaum and the band laughing heartily after the final thump. Can't blame them as they must had such a great time on that July day in 2019 when they created this delightful album.  A playful collection of Americana, blues, "roots-jazz", and chutzpah, "Lead Belly Reimagined" will help placate your Pandemic blues!

For more information about Lead Belly, go to www.leadbelly.org.  Check out Adam Nussbaum's site at www.adamnussbaum.net. You can purchase the album by going to https://adamnussbaum.bandcamp.com/album/lead-belly-reimagined.

Alto saxophonist and composer Max Bessesen grew up in Denver, CO, where he first discovered Ron Miles (cornet, trumpet)––in fact, among his first professional gigs were appearances with the brass master.  He studied at Oberlin Conservatory when he came into contact with master musicians/ educators Gary Bartz, Billy Hart, and Dr. Eddie Henderson. In 2016 he received a grant to study music that took him to India, Ghana, and Cuba.Upon his return, the saxophonist moved to Chicago where he became involved in the exciting music scene playing with bassist Matt Ulery, fellow saxophonist Greg Ward, trumpeter Emily Kuhn, and is part of the quartet Echoes. Bessesen's initial recording experience was Echoes 2018 debut EP "Square Two" followed up by the group's 2019 full album "Loading Screen." 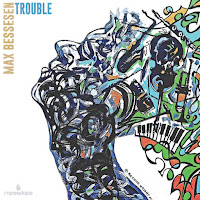 The saxophonist also started his own group upon his return to the US, a quintet that featured Eric Krouse (piano, keys), Ethan Philion (bass), Nathan Friedman (drums), and guitarist Zac Nunnery. Sadly, the guitarist died unexpectedly in December of 2018 and the ensemble continued on as a quartet.  Bessesen's debut as a leader, "Trouble" (Ropeadope Records), is dedicated to "...Nunnery and anyone in Trouble".  Mentor Miles joins the quartet for six of the ten tracks but one can hear from the maturity of Bessesen's writing that this is a group of equals.  The program opens with "Whirling"; the leader plays a circular melody while Miles adds noises in the background, the piano chimes in, the drummer dances on his kit––the piece serves as an introduction to "Blue Glass Halo", a richly melodic piece in which the cornet and alto sax share the melody. Listen below; there's a Kenny Wheeler influence to the music yet the rhythm section seems to want to be more active, especially Friedman's powerful work

Friedman is front and center on the 52-second "Nungam" which leads into the quartet playing "Bakkam".  The titles inform the listener that the music is inspired by Bessesen's studies in India. The melody line of the latter track has that inspiration as do the dancing rhythms.  Krouse's powerful piano solo roils atop the bass and drums setting the stage for the leader's exciting interaction with the band.  One can hear the influence of Rudresh Mahanthappa in the rapid-fire lines––Bessesen's tone is "sweeter" than the sometime tart timbre of his fellow alto saxophonist.

Pieces such as "Mayhem" and the title track also gives Ron Miles (photo left) and the musicians room to be inventive.  The former track has a simple yet "mysterious" melody as well as a relentless rhythm. As the music opens, Krouse adds his Wurlitzer electric piano to the mix.  The cornet solo slowly builds from the melody line out. Note the softer yet still strong accompaniment beneath him, Bessesen enters and the rhythm becomes funkier allowing the saxophonist to dance atop the beat. "Trouble" is, not surprisingly, a more sober work. With a long alto sax intro that sounds what a flower unfolding in the morning might sound like, the song moves forward with a muted cornet. After Miles' long solo, Krouse steps out inn front with a long, flowing, solo that builds in intensity pulling the drums and bass along. For the most part, Bessesen stays in the background until close to the end of the piece when he and Miles state the full theme. 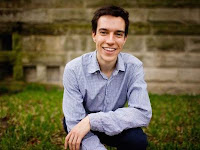 There's a lot of music, a plentitude of inspired moments, excellent musicianship and interactions throughout "Trouble".  Max Bessesen was certainly prepared for his debut yet this music does not sound overwrought or feel overwritten.  The leader contributed eight of the songs, pianist Krouse added one, and there's a lovely reading of Sammy Cahn's "Be My Love" that closes the album.  The alto saxophonist reminds this listener of another young alto player, Alex LoRe, especially in their "handsome" tone and willingness to move beyond conventional song forms while never ignoring the many musicians and sounds that preceded them.  When you add James Brandon Lewis, Logan Richardson, and several other to the list of artists who will move Black American and creative Contemporary Music forward through the next decades of the 21st Century, the music is in good minds and hands.

For more information, go to www.maxbessesen.com.  To hear more of and to purchase "Trouble", go to https://max-bessesen.bandcamp.com.