Trumpeter Diego Urcola (born in Buenos Aires, Argentina) and alto saxophonist/ clarinetist Paquito D'Rivera (born in Havana, Cuba) have been friends and musician partners forever three decades. Besides performing in Guillermo Klein y Los Guachos and with pianist Enrico Pieranunzi, Urcola has been in several of his friend's touring ensembles and has recorded with him several times. Urcola was invited to a South American festival several years ago to present a tribute to Gerry Mulligan's classic quartet with trumpeter Chet Baker: he immediately call D'Rivera and the seeds for the recording below were planted and have now come to fruition. 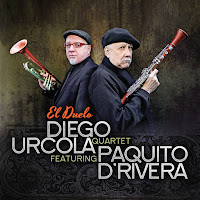 "El Duelo" (Paquito Records/ Sunnyside Records) is credited to the Diego Urcola Quartet featuring Paqutio D'Rivera.  The rhythm section features the excellent drummer Eric Doob (Ryan Keberle's Catharsis) and young New Zealand-born bassist Hamish Smith (Terraza 7 Big Band).  The 15-track, 77-minute, program features three original pieces by the trumpeter p,us works from the likes of Thelonious Monk, Guillermo Klein, Gerry Mulligan, Wayne Shorter, Dizzy Gillespie, and others. What you hear from the opening song, the title track (composed by Klein–listen below), is a band having the best of times over the course of two days at Bacque Recording Studios in New Jersey.  Listen to how the rhythm section challenges the front line, how Urcola and D'Rivera mesh their sounds then try to outdo each other when soloing.

There is so much good stuff to hear here. The lively Ornette Coleman classic "Una May Bonita" opens with Smith strumming his bass before the band enters. Doob's delightful drumming more than nods to the playing of the late Ed Blackwell while D'Rivera's playful sets the pace for Urcola's powerful spot.  The trumpeter (pictured left) switches to flugelhorn for the lovely "I Know, Don't Know How"–with D'Rivera on clarinet, the quartet sashays forth.  Urcola's muted trumpet plays the melody on Astor Piazzolla's emotionally rich "Libertango".  D'Rivera first enters playing percussive counterpoint before the trumpeter creates an impressive solo. Smith introduces Kenny Wheeler's "Foxy Trot" with a fine unaccompanied: when the rest of the band, the music jumps 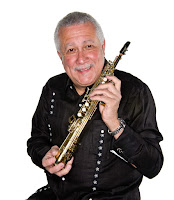 The program ends on a high note with three jazz "standards, Dizzy's "Con Alma", Benny Golson's "Stablemates", and Mr. Monk's "Bye-Ya."  The first track is taken a brisk pace with robust solos from the front line while Mr. Golson's piece dances in like a Latin ballad but a quick one. More flugelhorn and clarinet playing give the piece a robust feel.  The final tune brings the album full circle with the quartet hitting on all cylinders.  D'Rivera's alto solo is a treat––he plays with the energy of a person 50 years younger but the wisdom of an elder statesman.

"El Duelo" s a true delight.  The energy level never flags, the rhythm section pushes both Diego Urcola and Paquito D'Rivera with fire knowing the good friends are more than up to the challenge. And the slower pieces, such as Willy Gonzalez's lovely "Pekin", have an airy feeling.  I can picture producer Luis Bacque trying to choose the tracks for the album and giving up as each of the 15 cuts is with listening to time and again. Open the windows, turn up the music, and smile!

For more information, go to diegourcola.com.  The album will be released on September 18, 2020, and can be pre-purchased by going to https://diegourcola.bandcamp.com/album/el-duelo.


In a time when new artists are struggling even harder to be heard, one comes across an album that captures your attention and won't let go.  Drummer Raphaël Pannier, born and raised in Paris, France, came to the United States as an 18-year old to study at the Berklee College of Music in Boston, MA, where he came into contact with Terri Lyne Carrington, Ralph Peterson, Jr., Dave Samuels and many others. Upon graduation, he met and toured with pianist Emil Afrasiyab who was leading a group that played a fusion of jazz and the traditional music of Azerbaijan.  In 2015, Pannier continued his studies at the Manhattan School of Musisc studying with drummer John Riley as well as doing independent studies with saxophonist Mark Turner and trumpeter Alex Sipiagin.  The drummer has earned several awards while performing with saxophonist Steve Wilson, pianist Bob James, guitarist Lage Lund, bassist François Moutin, and pianist Aaron Goldberg. 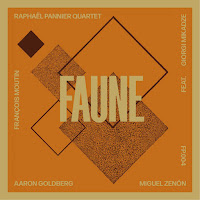 The last two musicians listed above appear on Pannier's debut as a leader "Faune" (French Paradox).  Joining them is alto saxophonist/ music director Miguel Zenón and, on three tracks, classical pianist Giorgi Mikadze (who hails from Tilibisi, Republic of Georgia, and whose music bends classical, folk and jazz). The album opens with Ornette Coleman's classic "Lonely Woman", a song that has been recorded hundreds, if not thousands of times. It's a treat to hear Zenón's richly emotive reading of the theme but pay attention to where the four musicians take the music (listen below). This is what creative musicians do: they listen to each, suggest different directions, feeding each others imaginations so that a tune as often-recorded as this, sounds fresh and makes you want to bathe in its creativity time and again.

The three "classical" pieces include Messiaen's "Le Baiser de l'Enfant Jesus", Ravel's "Forlane", and Pannier's "Monkey Puzzle Tree".  Each piece has its own pleasure.  Messiaen's composition is simply gorgeous.  The trio of Zenón, Mikadze, and Pannier caress the melody, the drummer skipping from cymbal to cymbal and onto the kit as the pianist supports the saxophonist's handsome phrasing.  Zenón sits out the Ravel piece while Moutin is added to the mix as well as the presence of electronic effects (on the piano)––the bassist is wonderfully melodic, often playing the melody alongside the pianist.  The drummer's original piece closes the album (with sax, bass, and piano). The impressionistic melody dances forward until Pannier introduces a dancing beat and Zenón solos over the quartet. 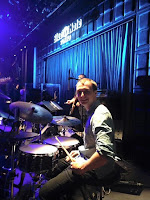 There's much more music on "Faune" including a rousing performance of Wayne Shorter's "ESP"––Goldberg's exciting intro sets the pace for the quartet but what initially stands out is how introspective the saxophonist and pianist sound in the thematic section while the rhythm section dances underneath them. Goldberg's subsequent solo is a gem while Zenón is so delightfully playful it should make you smile.

Raphaël Pannier does not use his debut album as a leader to show what a great soloist he is. Instead he creates an ensemble–the Raphaël Pannier Quartet–and, with the help of Miguel Zenón and the contributions of the talented musical partners, the music sings with originality, creativity, and joy.

To find out more, go to www.raphaelpannier.com. The album will be released on September 18 2020. It will be available on iTunes plus you can pre-order by going to https://raphaelpannier.bandcamp.com/album/faune.

Here is the excellent interpretation of the Ornette Coleman song:

Braithwaite & Katz · Lonely Woman - Raphael Pannier
Posted by Richard B. Kamins at 11:57 AM