Life has been busy around this reviewer's household and different communities but that does not stop (thankfully) the new releases coming through the mail or the ether.  This column starts a series of shorter reviews of recordings that arrived over the past few months.

Saxophonist, composer, and arranger Quinsin Nachoff is no stranger to utilizing strings in his compositions and performances––in fact, his 2006 debut "Magic Numbers" (Songlines) featured his quartet paired with a string quartet. Violinist Nathalie Bonin played on that project as well as on 2008's "Horizons Ensemble" so she asked her fellow Canadian (she's from Montreal while Nachoff is from Toronto) to write her a concerto.  It took the composer a number of years but the piece was first workshopped in 2014 and then recorded in 2018.  Nachoff decided to collect his classical or classically-inspired works on one album. The results, three different pieces, can be heard on "Pivotal Arc", released this month (August 2020) on Whirlwind Recordings. 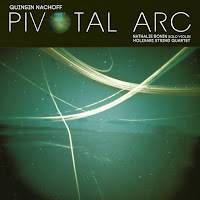 The "Violin Concerto" is in three parts, nearly 46 minutes long and features all the musicians listed below save for the composer. Very much in the traditional form but quite non-traditional orchestration, the music features Ms. Bonin's striking and powerful playing throughout but one cannot ignore the work of the Molinari String Quartet as well as the rhythm section of Michael Davidson (vibraphone), Mark Helias (bass), and Satoshi Takeishi (drums, percussion) plus the colorful reeds and brass (kudos to bass trombonist Bob Ellis for his strong low tones).  In his research, the composer paid close attention to a number of 20th Century composers, among them Alban Berg, Igor Stravinsky, Kurt Weill, and others but one also hears folk, jazz, and African elements in the rhythms.

The 16+ minute "String Quartet" was commissioned by and is performed by the Montreal, Quebec, Canada-based Molinari Quartet. This music is brash like the Concerto but with even more allusions to the experimentation of 20th Century classical composers.  Through-composed, there are moments in each of the movements that feel "free', as if the musicians were "cueing" each other to make quick shifts in intensity.

The 15-minute title track closes the album opening with a powerful bowed bass solo from Helias.  Ms. Bonin plays the first theme, joined first by the string and then the composer on tenor saxophone.  Various voices move in and out but pay close attention to impressive and, at times, playful percussion of Takeishi.  The brashness of the earlier pieces is replaced by an airiness, a sense of swing instead of flow: listen to the sections float around above the tenor solo and how, as the intensity picks up, for just an instance, so does the tempo.  Ms. Bonin returns closer to the end, the storminess of the middle section is not replaced by a lengthy melody shared by several instruments until the bowed bass returns to take the piece to its gentle conclusion.

As an album, "Pivotal Arc" serves to show the world the versatility and maturity of the composer Quinsin Nachoff.  Listeners might prefer to listen to the "Violin Concerto" in its entirety then come back at a later time to listen to the "String Quartet" and the title track.  There's a lot happening in this music and you really want to pay close attention to hear the richness of the melodies, the excellent musicianship, and the powerful work of violinist Nathalie Bonin. One of this year's more fascinating releases, "Pivotal Arc" is worth your time.

For more information, go to www.quinsin.com.  To hear more and to purchase the album, go to https://quinsinnachoff.bandcamp.com.


Bassist and composer Michael Formanek has been in ears of creative music listeners for nearly five decades. He first came to critical attention when he joined drummer Tony Williams's ensemble and has gone on to play with Freddie Hubbard, Stan Getz, Gerry Mulligan, Fred Hersch, Jane Ira Bloom, Marty Ehrlich, Harold Danko, Tim Berne, and a host of others. Currently, he is one/third of the cooperative trio Thumbscrew with guitarist Mary Halvorson and drummer Tomas Fujiwara. He's recorded for ENJA Records, Screwgun, Intakt Records, and ECM, the label that issued "The Distance" by his amazing Ensemble Kolossus. His latest release is the third in a trio of albums that bassist Adam Hopkins issued in July and August of this year on his Out of Your Head Records label. All of the albums (the others include bassist Nick Dunston in a quintet setting and saxophonist Anna Webber's Quartet) were recorded live under less-than-ideal conditions or "Untamed" as the label has written on each release). 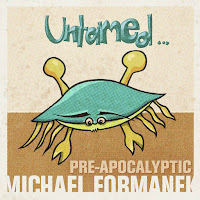 Formanek's contribution is "Pre-Apocalyptic": recorded in 2014 (but the artist is not sure where), the music, all tracks composed by the bassist, features Tim Berne (alto saxophone), Craig Taborn (piano), and Gerald Cleaver (drums), the same group that recorded his first two albums for ECM in 2010 and 2012––in fact, five of the seven songs come those albums, one from Ensemble Kolossus, and one newer work.  This quartet lives and breathes the music with the ability to stop and start without a dropped note, play complicated melody lines, and all solo with creativity.  Because the four musicians had worked together so often by the time of this gig, their familiarity with the music gives them license to push it forward.  And they do!

The album opens with "Pong", a melody built of repeated three-note phrases which shift in to a circular five-note phrase.  Then Berne and Taborn take off soloing in and around each other, both building off the intensity of Formanek and Cleaver. The bassist leads off the expansive (14:07) "Rising Tensions and Awesome Lights" with a long solo, melodic and percussive, before dropping into a walking bass line while the saxophone and piano work through the melody.  Taborn's wide-ranging powerful, and exciting solo leads into Berne's exploratory jaunt supported by throbbing bass hand-held percussion.  The other 14-minute track, "Intro and Real Action", starts quietly before Cleaver takes over for a lengthy solo that builds in intensity but drops back into a quiet mode for Berne to begin his statement.  There's a bluesy feel in many of his short phrases but he soon begins to interact with the other musicians, making the music louder. Yet, the music never boils over.  This Quartet may have been the first of Formanek's groups to perform "The Distance"––it's such a lovely ballad with an excellent solo from Berne, strong counterpoint from the composer, and excellent colors created by the pianist and drummer.

"Pre-Apocalyptic" overcomes its supposed "lo-fi" beginnings, hence a tip of the hat to mixing and mastering engineer Nathaniel Morgan for making this music sound so alive.  Michael Formanek has always been an impressive musician plus he is also one of the better composers in Creative American Music.  At times noisy, at others subtle, this album documents a quartet at the height of its power. Let these sounds move you!

For more information about the bassist, go to www.amibotheringyou.com. To listen to more songs and purchase the recording ($1.00 of every sale goes to Black Lives Matter), go to https://outofyourheadrecords.bandcamp.com/album/pre-apocalyptic.

Here's a lengthy piece from the album: