Somi, vocalist, musician, composer, and activist, is a first generation daughter of a couple who came to the United States from Rwanda and Uganda. Over the past decade, she has released four albums, toured the world and is the founder of "Salon Africana", an arts agency that celebrates the arts from the African continent. What audiences have discovered over the years is an artist with a wonderful voice, a fine lyricist who tells stories that touch on current issues as well as issues that touch on Africa and on the role of women in society. 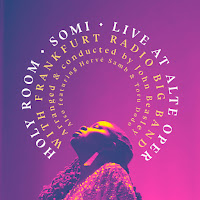 Her new recording (her debut on her own label), "Holy Room: Somi Live at Alte Oper" (Salon Africana/ hr Big Band), pairs the singer with the Frankfurt Radio Big Band for a live concert. John Beasley did all the arrangements for the 15-member ensemble plus two of Somi's touring band, pianist Toru Dodo and guitarist Hervé Samb.  All the compositions come from the vocalist except "Alien" (written by Sting as "Englishman in New York" with new lyrics by Somi) and "Lady Revisited" (written by Fela Kuti as "Lady" with new new lyrics). Eight more songs come from Somi's two most recent albums, while one is a piece from 2007.  Right from the opening, this music is enchanting, rhythmically exciting, with soaring vocals, stunning ballads, and intelligent arrangements for the Big Band. 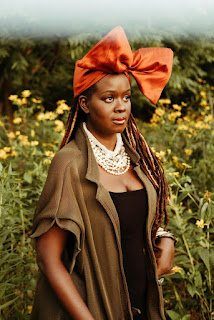 The 92-minute (two disk) concert program opens with "Kadiatou the Beautiful". Originally recorded for the 2017 "Petite Afrique" album (OKeh Records), the songs starts as a meditation before the African rhythms kick in and guitarist Samb breaks out into a powerful solo. Kudos to the Big Band's rhythm section, bassist Hans Glaswischnig (acoustic and electric basses) and Jean Paul Höchstäder (drums) for creating such deep beats.  Listen to them push the vocalist on "Black Enough" while the band wails in the background. Dodo's electric piano solo roils on top of the band.  "Ankara Sundays" (from 2014's "The Lagos Music Salon", also released on OKeh) features a splendid Beasley arrangement which, at times, has a Maria Schneider feel.  Somi's vocal is stunning as she inhabits the soul of a woman dreaming a way through her present life.  Samb's evocative guitar is the only accompaniment at the onset of "Like Dakar"––the reeds lead the band in and the songs drops into a sensuous rhythm thanks to the bass and drums. Listen to how the vocalist accompanies the guitar solo as if she was a part of the reed section.

Disk 2 opens with "Alien", Christian Jaksjö's amplified trombone leading the song in.  Somi tailors the lyrics that speaks to her experiences in the City ("I'm a legal alien/ I'm an African in New York") singing from the viewpoint of a taxi driver.  Listen to the various voices accompany the trombone solo, blowing like a wind through the caverns of Manhattan.  Dodo's classically inspired solo introduces "Two Dollar Day" (from "The Lagos Music Salon"), an impressive story of a young Nigerian widower trying to bring home enough money to feed her hungry children. We look at her from the outside, not knowing her name but realizing "her days are numbered."  "Look away, look away, if you dare" cries the vocalist before Samb's blues-soaked solo.  The guitarist has a long, unaccompanied, introduction to "Ingele" (from Somi's 2007's "Red Soil in My Eyes") is melodic and percussive as is the song that follows.  The vocalist plays with the title and adds others words but mostly utilizes her voice to interact with the band.  Samb and baritone saxophonist Rainier Huete create fiery solos over the rampaging band before Somi's voice, accompanied only by Hochstäder's fiery drumming brings the song to a close.


The album closes the lovely "Holy Room", a prayer that, similar to the Old Testament's "Song of Songs" in the way the words are a love song to her religion, to her God. Yes, there is a sensuality to the song but it's not lurid, sexy, or suggestive––the music is gentle, the vocal is lovely, and the arrangement handsome and supportive. Samb's guitar solo flows like birds dancing on the wind, the rhythm section  pushing but gently with the low reeds in the background.

"Holy Room", the album, is a treat for tired ears and minds.  It gets noisy at times but this is a joyful noise.  The lyrics are sometimes sad but the vocalist never sounds as if she has given up hope. John Beasley does excellent work here as does the Frankfurt Radio Big Band. While one may view this program as a reassessment of her earlier work, Somi gives her all to her art so this music sounds fresh, relevant, contemporary, and refreshing.   Such an excellent recording is worth your full attention!

For more information, go to www.somimusic.com.  To listen to more and purchase the album, click on
https://somi.bandcamp.com/album/holy-room-live-at-alte-oper-with-frankfurt-radio-big-band.