Guitarist and composer Miles Okazaki has proven to be quite an adept person in the Contemporary Music scene. His 2018 recording of "Work (the Complete Compositions of Thelonious Monk"), which is a solo guitar exploration of the man's oeuvre, was fascinating and still reveals new layers each time one returns to it.  Now, he's back with his Trickster quartet – Matt Mitchell (piano, Fender Rhodes, Prophet-6), Anthony Tidd (electric bass), and Sean Rickman (drums) – his "electric" adventure into and out of inner worlds and myths (if you want to understand the music's back story, go to www.milesokazaki.com/albums/the-sky-below-2019/ and read the "liner notes.") 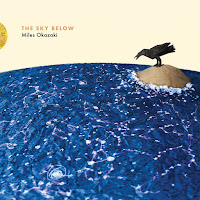 Listening to this group's second recording "The Sky Below" (Pi Recordings), even without the notes, is a fascinating experience.  There are links to the "jazz-fusion" of the 1970s, e.g. Chick Corea's electric Return To Forever as well as to the sounds saxophonist-conceptualist Steve Coleman has been making with the M-Base Collective for the past three+ decades.  The Coleman connection also includes his current rhythm section of Tidd and Rickman, chosen for its ability to lay down the foundations plus be part of the melodic explorations.  Listen to the three-way dialogue on the opening cut "Rise and Shine" between Okazaki, Mitchell (who replaces Craig Taborn from the first album), and Tidd, how each musicians has a complimentary melody to what the other is playing.  When Rickman's expressive drums are added, the piece takes off in a different direction.  Notice how Tidd sets the pace on "Dog Star", how the melody is built off his bass line, and how the different keyboards of Mitchell move in and around Okazaki. 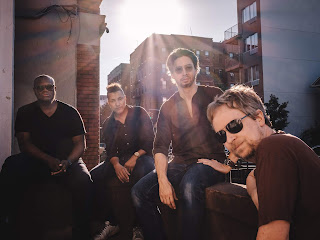 The blend of acoustic guitar and drums at the onset of "Seven Sisters", with the leader handling the melody (and the bassist the foundation) while Rickman s the "lead" voice is impressive.  The piece picks up intensity when the drums fall into the beat and Mitchell engages in a dialogue with Okazaki's electric guitar (note the acoustic piano is locked in with the bass while it's the Prophet-6 interacting with the leader).  The subtlety in the arrangements, even as the music moves from a roar to a whisper, stands out.

There is so much to take in as you listen to "The Sky Below"; note the use of layering keys and guitars and how the activities of the rhythm section add so much to how the music stands out.  Miles Okazaki, who has been touring Europe with his "Works" music as well as being part of Mary Halvorson's Quartet playing the music of John Zorn, produces music with Trickster that will not only challenge the listener but make them move their feet!

For more information, go to milesokazoki.com.

Pianist and composer Marta Sánchez, born and raised in Madrid, Spain nonliving in New York City, is, like many of her contemporaries, a very busy musician.  She first came to the US and to New York in 2011 on a Fulbright Scholarship – she studied at New York University and soon formed her Quintet.  Ms. Sánchez had led a trio and quartet while living in Spain, recording several albums as well as working as a sideman for numerous projects. Her US group included the rhythm section of bassist Sam Anning and drummer Jason Burger plus saxophonists Roman Filiu (alto) and Jerome Sabbagh (tenor).  They released their first album in early 2015 on Fresh Sound New Talent.  By 2017 when the second album was issued (also on FSNT), the rhythm section now included bassist Rick Rosato and drummer Daniel Dor. 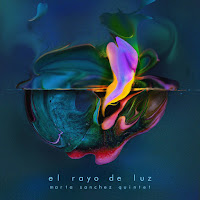 The Quintet, now with tenor saxophonist Chris Cheek instead on Sabbagh, now has its third album.  "El Rayo de Luz" (FSNT). On the second album, "Danza Impossible", Ms. Sanchez created much of the program to have the feel of dancing, swaying, and that trend is continued on the new recording.  Thete is also a touch of mystery to the stories the band tells on these eight songs. The mix of Filiu's alto and Cheek's tenor also gives the music, especially on the opening "Cascadas", a sense of urgency.  Pay attention to how easily the rhythm section moves as well as to how Ms. Sánchez "colors" in the background.  Her solo starts quietly and, while it does pick up in intensity, it's also a pleasure to hear how she expands the melody and her thoughts throughout the improvisation. The next track, "Parmesano", continues in that same vein but now Dor is responding to the soloists and pushing them forward.

"Nenufar" is a handsome ballad that on which Ms. Sánchez creates a lovely long solo.  Cheek continues along a similar road that the pianist created until Filiu reenters and the song moves to its close.  The combination of the saxes on the circular phrase that opens the title track is so seductive that the pianist and bassist pay a version of it. As the piece expands, the saxes move in and around each other, coming to together for unison and harmony lines.  As the dogs moves into the solo section, note the work of Rosato and Dor, the simple bass patterns (simple in that there are few notes) and the dancing cymbal work over the insistent piano creating a rhythm cushion for Fillies exploratory solo.  The bassist gets a short spotlight that is so melodic that it adda to the music rather than slows it down.

By the time the band and the listener reach the final track, one realizes how special this music is. Though the cut is titled "Unchanged", one cannot help but be changed by the music Marta Sánchez and the Quintet play here.  There's traces of Wayne Shorter and Guillermo Klein in the rhythms and melodies but neither the composer nor the musicians imitate anyone.  The Quintet are familiar with the material that Ms. Sánchez created for them; one can tell they truly listen to each other and are comfortable taking chances.  Try and see this ensemble live!

For more information, go to www.martasanchezmusic.com. 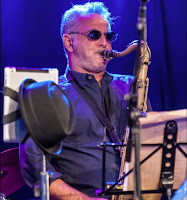 Since first coming to critical notice in 1990, Avram Fefer (alto, tenor, soprano, and baritone saxophones, clarinet, bass clarinet, flute, alto flute) has created music that can melt your speakers as well as pieces the can melt your heart. Fefer studied at Harvard, Berklee College, and the New England Conservatory of Music.  In his 20s, he moved to Paris, France, playing with numerous US ex-patriates such as Archie Shepp and Sunny Murray as well as groups from Senegal and the Arab world. He has worked with David Murray's Big Band, Go: Organic Orchestra, Greg Tate's Burnt Sugar, and bassist Michael Bisio.  His debut as a leader was issued by Cadence Jazz Recordings and featured bassist Eric Revis who has graced a number of his bands and recordings. 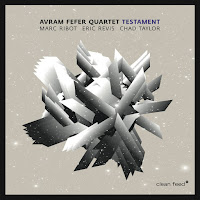 His new recording, "Testament" (Clean Feed Records), is his 15 or 16th album was a leader. It's credited to the Avram Fefer Quartet and features Revis, drummer Chad Taylor (who's been a member of Fefer's trio for over a decade), and guitarist Marc Ribot.  The eight tracks from the swinging "Dean St. Hustle" that opens to the album to drummer Taylor's prayer-like tribute to the late African bassist "Song For Dyani" (the only track on the album not composed by Fefer).  A West African feel permeates "Wishful Thinking", a piece that features splendid drumming by Taylor and foundational bass work from Revis.  The Quartet takes its time to get through the melody but then Fefer take off on a lengthy and playful solo, pushed forward and higher by the rhythm section. Ribot takes over and digs right into a loud solo that rides over the powerful beats. Fefer reenters for a wild moment dropping back to the bass and drums and the opening theme. 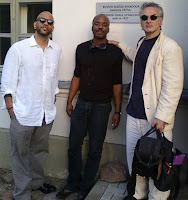 The title track roars forward on the interaction of the sax and guitar while Taylor thunders under them and Revis gets in on the melody.  The music never gets into a rhythmic flow which allows everyone to "attack" the piece. After the tenor sax solo, Ribot tears the speakers to shreds while Revis and Taylor go on a sonic rampage (the drummer must be in great shape as he never lets down through the entire song and that includes his interactions with the bassist that leads to the final moments of the song).  The final piece, "Essaouria", is named for the Moroccan coastal city on the Atlantic Ocean.  Taylor and Ribot set the sensual mood with Revis's insistent bass line moving the piece forward. Fefer's handsome melody sings out, not forced with the guitar chords ringing alongside. The intensity picks up during the sax solo yet the rhythm section takes its time.  Ribot's solo is quite rhythmical, having fun interacting with Taylor and Ribot. The music flows, often floats, and keeps its cool throughout.

"Testament" is an excellent collaboration between the four masters who make up the Avram Fefer Quartet.  Fefer, Marc Ribot, Eric Revis, and Chad Taylor play with fire, conviction, and plenty of joy. This, too, is a band worth seeing live but the album truly captures the essence of this powerful music.  Play it loud!!

For more information, go to www.avramfefer.com.

You'll note that all three of the music samples above come from Bandcamp.com.  You can buy the music and be assured that the artist gets a higher share of the profit than from other streaming services (especially if you use Spotify).