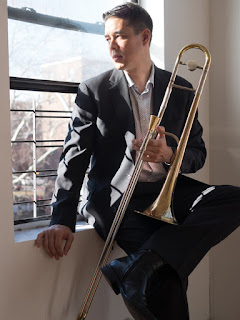 John Yao (pictured left) is one busy person. Besides leading both a big band and a quintet, the Illinois native has worked and continues to work in several large ensembles including the Vanguard Jazz Orchestra and the Afro-Latin Jazz Orchestra.  Yao has arranged for numerous groups and college ensembles plus now teaches in the greater New York City area.  He also gives workshops and currently has a monthly residence at Terraza 7 in Jackson Heights, New York.

Yao's quintet, now dubbed "Triceratops" (you'll understand why in a moment) has a new recording. "How We Do" (See Tao Records).  The long-extinct beast that gives the band its name is known for its three big horns; the "front line" includes Yao with Billy Drewes (alto saxophone, soprano saxophone) and long-time associate Jon Irabagon (tenor saxophone - he's appeared on each one of the trombonist's four albums).  The solid and exciting "back line" features bassist Peter Brendler and drummer Mark Ferber. 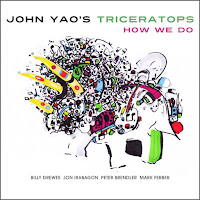 The eight-song program is a delight from beginning to end. Yao composed seven of the tracks, Irabagon contributes the the swinging "Tea for T" that closes the album, and, throughout, one can hear how much fun this group has playing together.  The opener, "Three Parts As One", features a melody and harmonies that the three horns share. Once the rhythm section lays down the pulsating rhythms, Drewes (on alto) solos first, supported by Irabagon and Yao before getting a chorus by himself over the bass and drums. Irabagon is up next, maneuvering around the slinky beats. Drewes and Yao reenter to lead him back to the theme before the trombonist rises out of the mix.  The music has the feel of Dave Holland's Quintet with Chris Potter and Robin Eubanks, an ensemble which at its best could bring a crowd to its feet with their great interactions.

After that track, the band digs into "Triceratops Blues", a tune whose title tells a lot of what you need to know.  The leader's smooth-as-butter tone gives his solo a delightful sound; that leads into a fine spotlight for Ferber support only by Brendler's melodic and foundational bass lines.  The title track is a episodic and playful set of interactions in which the rhythm section leads the way through melodic changes and tempo shifts.

For my money, there's not a weak moment to be heard in the 49-minute program.  The music swings, saunters then struts (dig "Doin' The Thing"), soothes (the lovely "Circular Path", a track that features an emotional soprano sax solo with counterpoint from trombone), and closes with sly pizazz of the afore-mentioned "Tea for T."  John Yao's Triceratops makes the kind of music that will never go extinct – it's fun, interactive, and crackles with creativity!

For more information, go to www.johnyao.com.

Over the past five+ years, trombonist, composer, and educator Michael Dease has built up a fine discography at Posi-Tone Records.  His seventh album for the label, "Never More Here", takes its title from the fact the jazz Dease and his fine cohorts make is always "in the moment"; even if the majority of the program comes from people whose physical lives may have come to a close, their music lives on.  Nine of the 10 tracks feature the core group of Renee Rosnes (piano) and Lewis Nash (drums) with bassist Gerald Cannon (replaced on three of the nine cuts by Rufus Reid), adding the talents of Steve Wilson (alto sax, soprano sax, or flute on five cuts), Jocelyn Gould (guitar on three tracks), and trumpeter Randy Brecker on one song.  The Dr. Billy Taylor classic "I Wish I Knew (How It Would Feel To Be Free)" finds the trombonist in the company of pianist Luther Allison, alto saxophonist Markus Howell, bassist Endea Owens, tenor saxophonist Diego Rivera, drummer Jason Tiemann, and arranger David Gibson. 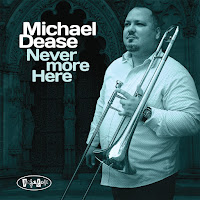 The program includes pieces by Dr. Taylor, Jackie McLean, Jimmy Heath, John Lewis, Eddie Daniels, Eric Alexander (the barn-burning "Frenzy"), two by Dease's inspiration JJ Johnson, plus an original each from Ms. Rosnes and the leader.  The pianist's "Mirror Image" leads off the album, a classy work where the front line works as one then independently.  Dease takes the first solo supported delightfully by the rhythm section, especially Mr. Nash's splendid dancing cymbals.  The composer follows with a fine spot followed by Wilson, on alto sax, who swings with great delight.  Mr. Heath's "Harmonic Future" (a tune that he debuted in the 1990s) swings with a passion as does Wilson on soprano and Dease on tenor sax!

There's lot to dig into here.  The sweet medium-tempo ballad, "For Hofsa", composed by Mr. Mclean has a lilting feel while Mr. Daniels's "Slow Dance" moves with grace of a slow Bossa-nova. Here, the gentle rhythm guitar blends well with the Ms. Rosnes's light touch. Look for the fine alto flute work of Wilson and more smooth trombone from the leader. Dease leads the way of Mr. Johnson's bluesy "Shortcake" – without Wilson, guest artist Rufus Reid contributes a delightfully melodic solo. The trombonist gets a long spotlight in the middle of the tune before Ms. Rosnes dances in front.  The other JJ Johnson tune, the classic "Lament", is a lovely ballad with  Dease leading the way playing with such emotion and love for this music.

John Lewis's bebop masterwork "Milestones", composed for Miles Davis's All-Stars with Charlie Parker, brings the program to a close on a springy set of steps. The composer played on the 1947 version; the original is not played at that frantic pace that other bebop tunes of the day were. It certainly fits Miles style of playing and there is no solo from Bird.  On the Dease album, the pace is similar but the beat is a bit looser, more buoyant.  Delightful solos all around from Ms Rosnes, the trombonist, Wilson (alto sax), Brendler, and Ferber.  It's certainly a sweet take on a classic.

"Never More Here" is a fine edition to the discography of Michael Dease.  It feels just right on a cold Autumn evening – check it out!

JC Sanford is a trombonist, composer, arranger, conductor, and a native of Minnesota.  Not only does he lead several different-sized ensembles, he conducts a number of large ensembles for people such as Andrew Rathbun, John Hollenbeck, Alan Ferber, and others. Sanford studied with the legendary Bob Brookmeyer and is currently on the faculty of Gustavus Aldophus College in Saint Peter, Minnesota. 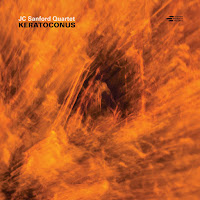 In April 2019, Shifting Paradigm Records released the trombonist's "Triocracy", a 2014 session with reed players Andy Laster and Chris Bacas.  Now, the label presents the JC Sanford Quartet and its debut recording, recording in February of this year. Perhaps the first album named for a disorder of the eye, "Keratoconus" features the leader on trombone and seven of the eight compositions as well as Zacc Harris (guitar), Chris Bates (electric and acoustic bass), and JT Bates (drums, percussion).  The title track opens the CD in a heavy-metal fashion, a thundering 93 seconds of distortion and all pedals-to-the-metal.  Sanford, who loves a good transition/ joke as much as any person, follows that with "Umm, Yeah", a lovely reduction for a large ensemble piece.  The handsome melody is introduced by Chris Bates (on arco bass) supported by gentle guitar lines and soft drumming. Sanford also plays the melody through before Harris steps out for a handsome solo.  The music is always moving, fairly gently, pushed forward by the rhythm section (listen to JT Bates pushing the leader forward on his solo ratcheting up the energy before the sounds calm down to a handsome bass solo.

The Quartet plays in and with many different styles throughout the album.  The funky opening of "Bates Brothers Boy Band" leads into a romp that is part Bossa Nova and part Motown.  Notice how the tune and the time dissolves on several occasions, leading to fine solos from the leader, bassist, and drummer.  "JT-Rex" is a showcase for the drummer with Sanford adding melodic fragments. The bass and guitar join in on those snippets but this is JT Bates time to shine – dig the crazy and stomping last 10 seconds coda. "Zaccfarben" is the guitarist's piece; the title blends his first name with the German word for "colors."  The performance lives up to its name with numerous shifts in melody, going in and out of rhythm, various dialogues between the musicians usually with Harris leading the way.

"Selfish Shellfish" takes the program out in a quirky and quite thumping fashion. The Bates Brothers rhythm section set the pace, one that leads to a rapid-fire bass solo and a John Bonham-style drum solo. The song ends with the Quartet vocally riffing on the title and a bit more.

Keratonus, the progressive eye disease, is not contagious but "Keratonus", the JC Sanford Quartet album, is often quite infectious. Much of the music is filled with humor plus the feeling that these four musicians are having a great time making music.  Even the one "standard", "All The Things You Are", moves in a jaunty manner.  Life is short, why not have fun? Umm, Yeah!

For more information, go to www.jcsanford.com.

Here's a taste and the opportunity to purchase the album: