Pianist, composer, and educator Fred Hersch has amassed an amazing discography over the past three-plus decades but rarely has he played with a large ensemble (outside of the "Leaves of Grass" Ensemble of eight instrumentalists and two vocalists plus the 12-member ensemble that produced "My Coma Dreams").  He has done some work with symphony orchestras, string ensembles, and vocal choirs. 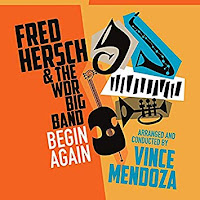 Enter arranger Vince Mendoza and the WDR Big Band.  The Band, based in Cologne, Germany, is famous throughout Europe for its rigorous schedule and the great musicians, arrangers, and collaborations with people from all around the world. Mendoza has worked and recorded with the ensemble on several occasions. "Begin Again" (Palmetto Records) finds the arranger and band working with Hersch, culling with songs from throughout his career as well as debuting a new piece.  The title track is that new composition and it opens the album in a gentle swinging manner.  Like the easy majority of Hersch compositions, the melody is smartly crafted - in fact the composer leads the Band in to the body of the piece with is trademark gracefulness. The first solo belongs to alto saxophonist Johan Hörlen whose handsome lines rise above the intelligent section writing. Then Hersch steps out and creates a splendid musical portrait. Make sure to listen for the Cuban-style solo piano break and the smart, playful, drumming of Hans Dekker.

It's impossible to pick one stand-out track because....well...because they all stand out!  The fiery interactions of the sections is a highlight of "Havana" while the dark harmonies and eerie sounds that permeate ""Out Someplace (Blues for Matthew Shepard)" place the listener out in the hills of Wyoming as the young man, tortured and tied to a barbed wire fence, fights for his life.  The music has echoes of the impressionistic ballads of Duke Ellington.  Compare that to the classically-inspired "Pastorale" and its uplifting atmosphere (including the splendid solo piano opening and the "chorale" Mendoza creates for the reeds). Should you want to dance around the room, play "Forward Motion" good and loud. The propulsive nature of the melody and Dekker's powerful drumming is a recipe for body movements.  Dig the great two-way conversation that trumpeter Ruud Breuls and trombonist Andy Hunter have before the tenor  saxophonist of Paul Heller explodes.

The program closes with "The Orb", a tune from "My Coma Dreams" dedicated to Hersch's life partner Scott Morgan.  The lovely ballad, which is a piano solo for two-thirds of its 5:12, closes with a lovely arrangement for the reeds with the brass as a counterpoint.  It's a perfect end to a brilliant album.

Fred Hersch creates works that often feel orchestral even if he is playing solo or with his trio.  Plus, he plays with such fluidity, the phrases flowing forward with grace and intelligence. With the addition of Vince Mendoza's fine arrangement and the smashing work of the WDR Big Band, "Begin Again" is masterful and delightful!

Give a listen to this handsome ballad:

Starting a big band is a daunting challenge. Even if you have great material, you need to find the right musicians who are sensitive to the nuances and possibilities of the music.  And, you have to figure how to pay them, find rehearsal space, and, if you are truly blessed, venues to perform.  For example, the Vanguard Jazz Orchestra grew out of the Thad Jones-Mel Lewis Orchestra, an ensemble that would meet every Monday night at the Village Vanguard in New York City (and still does in its 54th year!).

The Terraza Big Band, the brain-child of saxophonist Michael Thomas and bassist Edward Perez, took it name from Terraza 7, a bar and performance venue in Jackson Heights/Elmhurst, Queens, NYC.  The venue is a lively music spot with performances of all styles of music nearly every night of the week plus it hosts weekly workshops.  Messrs. Thomas and Perez began rehearsing their band once a month (on the first Thursday) starting in the summer of 2015, slowly but surely building a repertoire and a steady lineup. Look below  – you'll recognize a number of those musicians not just as sidemen but also as solo artists. When the leaders felt the time was right to record, they commenced a Kickstarter, raised more than enough money and went into the studio. 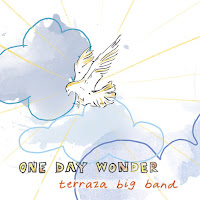 The results of the work of this 18-piece band can be heard on "One Day Wonder" (Outside In Music). Right from the first notes of Thomas's "Zed", you can hear a well-oiled music machine. The hard grooves of the rhythm, the call-and-responses from the reeds and the brass plus the fine counterpoint, all point to music that is smartly composed and intelligently arranged.  No one voice stands out (though drummer Jimmy Macbride is the lynchpin). Alex Wintz steps out for the first solo over the highly-responsive rhythm section.  The music sounds so bright, extremely well-recorded, it feels as if the listener is sitting in front of the ensemble.  Listen to the clarity of the soloists on "Without Doubt", how Luis Perdomo's piano solo is so crisp as are the delightful turns from saxophonist Troy Roberts and trumpeter Dave Neves.  But, also pay attention to the foundation of the piece, how bassist Perez roams around the bottom as Macbride explores along with the soloists while the piano chords hold the music together.

The bassist brought one of his older pieces to the band.  "Pasar el Tiempo, Aunque Fugaz, Contigo" sizzles with the fire of Tito Puente and Arturo O'Farrill with a melody line built from the percussion (Macbride and Samuel Torres really shine). Perez also contributes "Flights of Angels" - again, the melody/theme is provided by the reeds and brass sections which lead to fine solos from the bassist and guitarist Wintz.  Perez's Latin (musical) roots are on display on the burning "Me Lo Dijo Mi Primo." The rhythm section is absolutely on fire setting the stage and pace for a fiery, expansive, solo from John Ellis (tenor sax) – when he interacts with the brass in the middle of the solo, the music gets even hotter.

Meanwhile co-leader Thomas's "Longing" is not only another intelligent melody but yet again, the music opens up to fine solo, this time from the baritone sax of Andy Gutauskas and the trombone of John Fedchock (the most experienced member of the Band).  The album closes with Thomas's "Think Tank", a funky work that explores the different voices within each section plus a whirling dervish of a soprano sax solo from the composer.

In a year whether have been a plethora of fine big band and large ensemble albums, "One Day Wonder" stands out.  The music that co-leaders Edward Perez and Michael Thomas have created and curated for this band is uniformly excellent; the musicians that have assembled shine throughout and they all contribute.  One hopes that the Terraza Big Band continues to thrive and grow in the coming years and beyond.

For more information, go to www.terrazabigband.com/home.