The Bass In Many Places (Part Two)

Over the past 10 years, bassist (acoustic and electric) Linda May Han Oh has been one of the busiest musicians on the contemporary music scene. She has toured and recorded with Dave Douglas, Joe Lovano, Terri Lynn Carrington, Pat Metheny, Johnathan Blake, and Fabian Almazan (her husband).  Beside her continual work as a side person, she also leads several units that play (mostly) her original music (including a trio, quartet, and quintet). Ms. Oh's music covers a wide swath of stylistic territory and, to may mind, she's more interested in melody and harmony that she is on "showing off her chops".  She's a fine soloist but an even better "foundational" bassist. 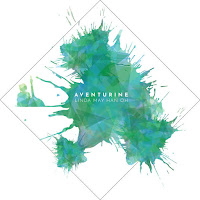 "Aventurine" (a word that is defined as "a translucent mineral containing small reflective particles" - the green version is called "the Stone of Opportunity") is her second album for the Biophilia Records label. Ms. Oh has been working on some of this music for the past 13 years: it's written for quartet (saxophonist Greg Ward, pianist Matt Mitchell, percussionist Ches Smith, and the leader), string quartet (violinists Fung Chern Hwei and Sarah Caswell, violist Bennie Von Gutzeit, and cellist Jeremy Harman), plus four tracks feature a vocal quartet (Louisa Rankin, Josh Kyle, Andrew Murray, and Jonathan Skovron with director Gian Slater).

The 14-song program contains absorbing music, pieces that not only make you think but also have great emotion.  Ward, who plays both alto and soprano saxes, is such a versatile player.  His singing alto enlivens pieces such as "Rest Your Weary Head (Part two)" and "Au Privave" (yes, the Charlie Parker tune): on the former track, he meshes a sweet sound with the flowing strings and wordless vocals while on the latter, he engages in quite an interaction with Mitchell.  Notice the pianist's  rippling call-and-response with the bass on "Cancrizan" plus his delightful lines underneath Ward's soprano sax and the exclamatory strings on "Song Yue Rao (Moon in the Pines)", a traditional Chinese folk song whose arrangement suggests Far Eastern harmonies and the work of Aaron Copland.  Smith, who can whisper on the cymbals as well and pound out hard rhythms, is a stalwart throughout. He goes from subtle to swinging to "beyond" on "Satuit" plus check how delightfully he dances along with the strings and electric bass on "Lilac Chaser" (another track with a splendid piano solo as well). 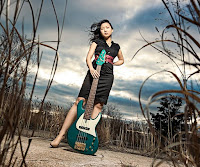 The album closes with Ms. Oh's rearrangement of Bill Evans's loves ballad "Time Remembered" - the opening three minutes+ belongs to the string quartet before the bassist moves into a solo with strings as support. Mitchell and Smith (brushes) join the players for several more minutes until the string quartet returns to take the piece out.  It's an amazing arrangement and really shines a light on the leader's ever-maturing talent.

Linda May Han Oh has created quite a statement with "Aventurine", making music that reverberates in one's mind long after you have heard the last notes. Wonderful musicianship all around; take a chance and dive into these pools of sounds - you won't regret it.

For more information, go to lindamayhanoh.com.

Bassist and composer André Carvalho came to the United States in 2014 on a Fulbright Scholarship where he studied at the Manhattan School of Music.  Born and raised in Lisbon, Portugal, he'd already built quite a career as a sideman and leader in both the jazz and classical worlds, winning grants to tour Egypt and working with the likes of Brazilian singer-songwriter Gilberto Gil and the Ibero-American Orchestra, Gustavo Dudamel conductor. He released two albums as a leader in Portugal (2011 and 2013), both shoeing the influences of jazz and classical music. 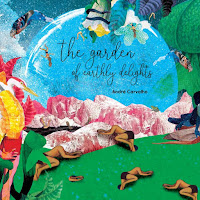 His first U.S. release is "The Garden of Earthly Delights" (Outside In Music) and inspired by the painting of the same name from Hieronymus Bosch.  Painted between 1490-1500, the triptych visualizes the creation of the world, life's joys and sorrows' and the dangers of sin. Carvalho, like the Dutch painter (1450-1515 or 16), juxtaposes light and dark, harmony and atonality, composition and improvisation, complexity and simplicity, to paint his 11-part Suite. He's aided and abetted by an excellent ensemble including André Matos (guitar), Oskar Stenmark (trumpet, flugelhorn), Eitan Gofman (tenor sax, flute, and bass clarinet), Jeremy Powell (soprano sax, tenor sax, and flute), and Rodrigo Recabarren (drums, percussion). 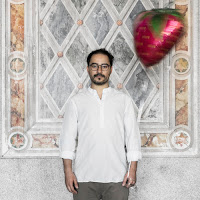 There's much to capture your attention over the course of the 58+ minutes of the album. There's he handsome opening track "Prelude" with the reeds (soprano sax and bass clarinet) and trumpet blending their voices over the rubato opening before the rhythm section drops into a slow-paced exploration of long tones.  "The Fools of Venus" follows, opening as a playful dance before dropping back to a slower tempo.  There's quite a touch of blues and funk in the music plus several strong solos (Recabarren's drums are a big plus as well). There's a lightness that permeates "Of Mermaids and Mermen", a playfulness that dissipates several minutes into the piece as Gofman enters his tenor solo atop spare bass notes, chattering drums, and ethereal guitar chords 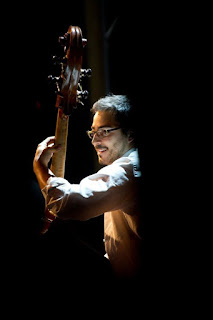 After the short yet strangely constructed "The Thinker in the Tavern", a piece for percussion, guitar (with and without effects), and bass, "The Forlorn Mill" comes roaring out of the gate with Matos's guitar roaring atop the fiery drums and thumping bass.  Add the trumpet, tenor and soprano saxes who then share the solos in a call-and-response with the rhythm section. It's fun and crazy, noisy, playful, and a bit scary all at once.

"The Garden of Earthly Delights" closes with "Phowa", a handsome ballad with a a gentle pace, a handsome melody shared by the trumpet and bass clarinet with quiet drums, counterpoint from the bass, and Matos's  alternating chords and phrases.  It's a gentle landing for an album that covers a lot of musical territory. André Carvalho is an impressive composer and arranger (go to his Bandcamp page to check his earlier releases) plus a fine bassist.  This music is a group effort and everyone's voices are heard.  Quite an aural treat, a delight!

For more information, go to www.andrecarvalhobass.com.

Bassist Pablo Aslan, a native of Buenos Aires, Argentina, has lived in the United States for nearly four decades. In that time, he has become the foremost interpreters of tango music, playing both traditional and new works as well as being an educator, producer, sideman, and researcher.  He possesses a beautiful tone as well as a technique that allows his instrumental voice to stand out without sounding over-amplified or "gimmicky".  As a leader or co-leader, Aslan has recorded five albums and produced several others. 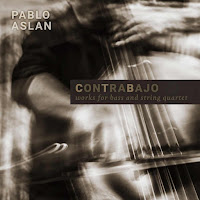 His latest venture, "Contrabajo: Works for Bass and String Quartet" (Soundbrush Recordings), finds the bassist in the company of Quarteto Petrus, a string quartet based in Buenos Aires and composed of violinists Pablo Saravi and Herman Briático, violist Adrián Felizia, and cellist Gloria Pankeava. Te 10-song program consists of compositions by Heitor Villa-Lobos, Duke Ellington, Roger Davidson, Gabriel Senanes, Gerardo Matos Rodriguez, Alexis Cuadrado, and one piece by the leader.   The two pieces by Cuadrado (one of Aslan's closest friends), "Confluenceas" and "Reflejos", come back-to-back and are the first "classical" pieces composed by the fine Spanish jazz bassist. The former track has a delightful bounce and lilting melody that is shared by all five musicians while the latter is slower, with a percussive feel from the cellist.  The bassist has the lead throughout the piece, first playing arco (bowed) and then pizzicato (listen closely, it sounds as if the string quartet is "looped").

Paquito D'Rivera appears on the Aslan composition "Tanguajira", his delightful lines rising above the quintet as well and becoming part of the ensemble.  His dancing solo is a highlight; while the leader bows the bottom and the percussion, the other strings sway and pluck in support.  Senanes, who wrote two of the pieces and arranged three others infusing the lush reading of Ellington's "Come Sunday."  In the liner notes, Aslan writes that the arranger steered him towards the vocals of Mahalia Jackson as the inspiration for his playing. Senanes's "Contratango" features the bassist throughout either bowing, plucking, or being the percussion section.  The body of the bass makes quite a resonant drum!  Aslan's long-time musical partner Raul Juarena arranged the classic Matos Rodriguez (1897-1948)  piece "La Cumparsita" that closes the album.  He also appears on the bandoneon sharing the solo duties with the bassist.  The bright and bouncy music is both melodic and dramatic.

"Contrabajo" is a treat from start to finish.  Tango music can be quite attractive with its blend offloading melodies and percussive intensity.  While there is no drummer, one can easily see people dancing to these often-rousing sounds.  Pablo Aslan's assertive sound, his excellent bowing technique, and articulate pizzicato leads the way while Quarteto Petrus adds vibrant colors and its own splendid melodic qualities.  Enjoy!!