The Drummer Tells the Story (Pt 1) 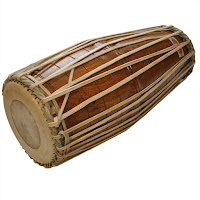 I was lucky to grow up in Middletown, CT, for many reasons: one in particular was the presence of Wesleyan University, its bookstore, galleries, theater, and, especially, the Music Department.  The University greatly expanded its World Music studies under the auspices of Robert "Bob" Brown introducing the students (and curious community members) to Javanese gamelan music as well as South Indian classical music. Members of the faculty were two brothers, T. Vishwanathan, an amazing flutist, and T. Ranganathan, who played the mridangam, a double-headed drum. "Ranga", as he was called, was one of the most out-going people one could ever meet. He had a great sense of humor and was strikingly humble about the fact he was an amazing percussionist (here he is in the 1960s - click here).  He died much too young - at the age of 62 - but I can still hear his incredible laugh and his amazing hands as they created such amazing rhythms and melodies.  Like the great tabla master Alla Rahka, Ranga could make you marvel at his technique as well as being thrilled by joyous playing. 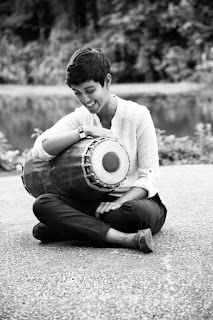 Meet Rajna Swaminathan. She plays mrudangam (variant spelling), having studied with several current masters of the drum including Umayalpuram K. Sivaraman.  Ms. Swaminathan, born in Maryland, has been involved in both the world music and jazz scene in New York City since 2011 working with artists such as Vijay Iyer, Amir ElSaffar (she's a member of his Two Rivers Orchestra), Steve Coleman, and saxophonist Maria Grand.  She's currently a Graduate Student at Harvard University and has worked with Iyer in that capacity as well as on several concerts.  Ms. Swaminathan also composes for dance and theater productions including 2015's "The Worry Machine" (music from the Anu Yadav play, "Meena's Dream").  Her frequent musical companion is her sister Anjna who is a composer and violinist. Together with their father Dr. P.K. Swaminathan, they run a 5013-C called Rhythm Fantasies, INC, whose goal is to "promote South Indian classical music and dance in a space that encourages education and enrichment through innovation and cross-cultural collaborations." 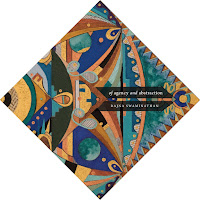 Now Rajna has her first album as a leader "Of Agency and Abstraction" (Biophilia Records).  The recording, co-produced by Iyer, features her group RAJAS, a quintet that features her sister (violin), Ms. Grand (tenor saxophone), Miles Okazaki (guitar), and Stephan Crump (bass) plus guest Amir ElSaffar (trumpet) and Ganavya Doraiswamy (vocal).  One of the joys of this music, this beautiful collection of original compositions, is that while it's obvious these musicians are brilliant technicians, there's more emotion inside the motion, a flow that enters one's mind, closes the eyes, and allows you to breathe easily (that's what it does for me).  Note how easily the percussive [luck of the guitar combines with the singing violin, bowed bass, bouncing mrudangan, and dancing tenor saxophone blends.

The tendency to want to discuss this music gives way to the belief that each listener approach there album with an open mind.  If you're looking for a message, take your time to find it.  The leader describes the group's mission as one that is "a network of like-minded improvisers from multiple/overlapping traditions to experiment with new horizons of relation through hybrid forms, textures, and sensibilities." After all, RAJAS means passion/action" in Sanskrit.

Yet, there are moments throughout that stand out.  Ms. Grand's breathy tenor leads the way on "Peregrination" with the violin in counterpoint and the rhythmic guitar in sync with the percussion.  The splendid "singing" violin meshing with the guitar at the onset of "Vigil" begins a journey that spreads over 10 minutes with the various voices adding counterpoint and harmony.  Ms. Doraiswamy and Mr. ElSaffar join the quintet on "Departures" - while you may not understand the words, the trumpet and violin create a call-and-response that helps to transmit the emotions of the lyrics.  Don't ignore the contributions of bassist Crump - his arco work throughout is deep and resonant. Without a "regular" drummer, he's free to be melodic as well as foundational. 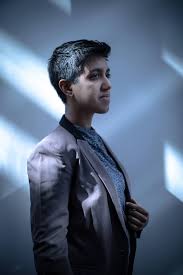 Just listen.  As I write these words, the windows are open and birds are singing in the trees close to the house.  Their songs fit in nicely with the sounds swirling out of the speakers.  Late at night, listen.  Early in the morning, listen. Give this music all the attention you can. Time will fall away and the beauty inherent in these songs, these collaborations, the myriad voices, will seep into your soul.  Too poetic for you?  This music is quite lyrical, gentle, soothing, and challenging.  "Of Agency and Abstraction" stands out amidst the noise of the everyday. Rajna Swaminathan took plenty of time to create this music, to find the right musicians, the right sonic combinations, and the results are very impressive, very moving.  Listen.

For more information, go to www.rajnaswaminathan.com.

Here's an example of the wondrous sounds: 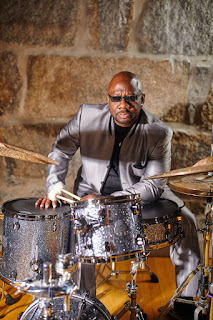 The drummer, educator, and mentor Ralph Peterson literally burst into the public ears in 1985 as a member of O.T.B. (Out of the Blue), a group of young musicians that Blue Records Records created to showcase younger talent.  He worked with so many musicians through his career including Tom Harrell, Terence Blanchard, Geri Allen, Charles Lloyd, and Betty Carter.  But the once person who made the biggest impression on his person and career was drummer Art Blakey.  Peterson was one of the few drummers who the great master invited to play in his bands, the talent incubator known as The Jazz Messengers.  The younger man learned that you give everything on the bandstand and that you expect the same from the people you work with as well as to pass on the jazz traditions through your music and through teaching.  Peterson has done just that over the years creating groups that featured younger players such as clarinetist Don Byron, vibraphonist Bryan Carrott, pianist Orrin Evans, and trumpeter Sean Jones (among others). 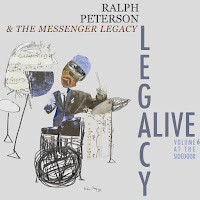 Peterson has been recording prolifically over the past few years for his own Onyx label. Most of those albums feature younger musicians recorded live.  The newest addition to the catalogue, "Legacy Alive: Volume 6: Live at The Side Door", is credited to Ralph Peterson & The Messenger Legacy, a sextet composed of musicians who played with Mr. Blakey (1919-1990) in the late 1970s and through 80s.  What a unit - Bill Pierce (tenor saxophone), Bobby Watson (alto saxophone), Brian Lynch (trumpet, Essiet Essiet (bass), and Geoffrey Keezer (piano), who along with Peterson, swing their way through 11 pieces associated with the Jazz Messengers repertoire (the group stayed active for 35 years!)

The program was recorded over two nights in October 2018. The Side Door Jazz Club in Old Lyme is owned and operated by Ken Kitchings (Rich Martin does the booking) and there is no bigger or more vocal supporter of the music in the state than he.  If you listen closely, you can hear Kitchings shouting his encouragement throughout and the end of songs. Why not?  The sextet is having a great time, they all play with gusto, the material is top-notch, and the sound is great. The drums and piano come through loud and clear; Brian Lynch's trumpet cuts through the mix with his delightful blend of riffs, smears, and articulated lines. It's so great to hear Bill Pierce playing so strong, his bluesy solos are a treat.  Bobby Watson, who joined the Messengers in 1977, has always played with wit, humor, and when called for, grace. He does so here as well.  He also has blues in his background but he can fly with ease over this band. Check him out on his "In Case You Missed It", a tune on which everyone solos with abandon.  Geoffrey Keezer, who joined the Messengers when he was 18, also plays with great wit and spontaneity.  Listen to his unaccompanied opening of "That Ole Feeling" - he sets the pace for the band who dance delightfully behind his sparkling keyboard.  His solo on Curtis Fuller's  "A La Mode" is flat-out amazing 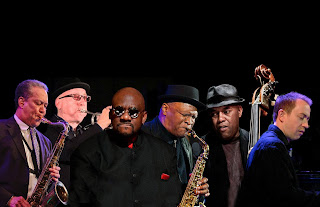 As for the leader, he's always been fun to listen to. Yes, his power can overwhelm some groups but not this one.  His ability to push a band, to prod soloists, to stop-on-a-dime, to create a storm that not only dazzles listeners and make them shout but also is so darn joyous - Peterson is having fun, even as you realize that some of this material was composed 40, 50, over 60 years - this band makes it sound contemporary.  The Juan Tizol - Duke Ellington classic "Caravan" was first recorded in 1936. Listen here and it's alive, ebullient, and powerful.  "Three Blind Mice", credited to Anthony Rooley and Thomas Ravenscroft (who wrote the melody in 1611), was recorded by Blakey in 1962 in a quintet that included Wayne Shorter and Freddie Hubbard.  The arrangement is quite similar and the overall effect is as well.  The sextet also takes an energetic run through Shorter's "Children of the Night" (which he composed and recorded with The Messengers in 1961).

Thanks to the great engineering and mastering, the music on "Legacy Alive" is loud and clear. Every member of the Messenger Legacy gives his all (just as Art Blakey commanded them to do during their tenure with him) - it's that dedication, that desire to communicate living history, that makes this music so thrilling.  Just start with first track "A La Mode": if that does not make you jump up and shout, call the doctor immediately! Also, check out the great cover collage by CT-based artist Andres Chaparro. It exemplifies the powerhouse that Ralph Peterson has been throughout his career and who is today.

For more information, go to www.ralphpetersonmusic.com.