Sounds Of Change, Of Life, Of Dedication, Of "Stretch Goals"

Trumpeter, composer, and podcaster Dave Douglas has truly big ears.  Over a career that spans nearly three decades, he has played with and recorded numerous ensembles of all sizes, making music that can be very political in nature, exploratory, soulful, classical, and highly interactive.  He started his own label, Greenleaf Music, in 2005 not just for his own different projects  but also to spotlight work by a diverse group of contemporary ranging from Donny McCaslin to Linda May Han Oh to Rudy Royston toRyan Keberle & Catharsis to Greg Ward.  His blog, "A Noise From The Deep", is notable for his in-depth interviews with artists of all stripes within the contemporary music scene. 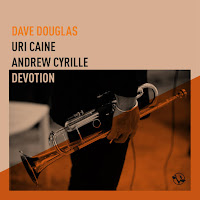 The majority of his albums feature Douglas with younger musicians. However, his latest project, "Devotion", features the trumpeter in an interchange of musical ideas with pianist Uri Caine (a long-time compatriot) and master drummer Andrew Cyrille.  Caine and Douglas have a long-running duo but adding Cyrille takes the music in many fascinating directions. There's the tango-like "False Allegiances" - inspired by Carla Bley, the trumpet lines snake through the rich piano accompaniment and the quiet yet pounding drum part.  Douglas, who claims Mary Lou Willams as a major influence, composed "Rose and Thorn" with the great pianist and composer in mind.  The dancing rhythms created by Caine and, especially, Cyrille and exciting and fun.  The piano solo goes from boogie-woogie to gospel and beyond.

The lovely ballad,"We Pray" is inspired by Dizzy Gillespie. With its handsome trumpet melody, rich piano chords, and the soft brush-on-cymbals and snare work, the music pulls the listener in.  The muted trumpet and gentle brush work at the onset of "D'Andrea" (dedicated to pianist Franco D'Andrea) gives way to a bluesy waltz.  Caine's solo is a delight while Cyrille's soft-shoe accompaniment is a witty touch.

Andrew Cyrille, an active participant in the creative music scene, remains creative and adventurous at the age of 79 (he turns 80 in November of this year).  His delightfully subtle style shines throughout the album, even when he is playing as soft as a whisper.  Tune in to "Prefontaine" (inspired by long-distance runner Steve Prefonataine who passed tragically at the age of 24). Listen how the drummer interacts with Caine during the trumpet solo, the piano's percussive riffs flowed by rapid-fire runs echoed by the cymbals and snare.

The title track, a hymn composed by Alexander Johnson (1791-1832) in 1816, closes the album.  The musicians respect the original melody but also open it up to interpretation.  Why not? That's what they do all throughout "Devotion".  Dave Douglas, Uri Caine, and Andrew Cyrille are master musicians and communicators.  We are the beneficiaries of their hard work, interactions, and, yes, devotion.

For more information, go to greenleafmusic.com.

Ben Kono, composer, reed player, is a native of Vermont who has been based in New York City for two decades.  One of the more versatile players on the contemporary - he plays tenor and soprano saxophones, clarinets, flutes, oboe plus English Horn - has worked with and recorded with Darcy James Argue's Secret Society, Joseph Phillips' Numinous, and the John Hollenbeck Large Ensemble.  Because of his ability to play so many different instruments, he has played in the "pit orchestra" or "pit band" in numerous Broadway productions. 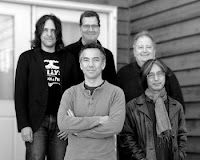 Kono also has a quintet to play his original music.  An earlier version of the group (guitarist Pete McCann, pianist Henry Hey, bassist John Hébert, and drummer John Hollenbeck) is featured on Kono's 2011 debut recording "Crossing" (1918 Records), an album that received great praise (including my review - click here) not just for the musicianship but also for quality of the compositions.  There are several overtly political songs but also pieces dedicated to family and the many places Kono had visited as a child and as a young adult. 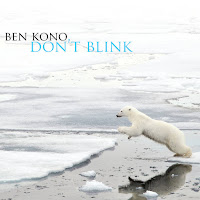 "Don't Blink" (self-released), Kono's second album, had its beginnings in 2011 from a remark that the composer's daughter made about a photo he took as a youngster on a trip to Glacier National Park in Montana.  After doing research, Kono realized that the ice formations he had photographed were starting to disappear due to climate change.  He began to compose pieces around environmental themes and recorded them in February 2015 with his quintet (at that time, the group included McCann (acoustic and electric guitars), Hey (piano, Fender Rhodes), Kermit Driscoll (acoustic and electric basses), and Satoshi Takeishi (drums, percussion). Kono could not find a label to release the album and it languished until this year when he released the album himself. 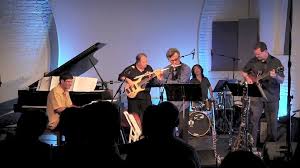 The 15 tracks (five are one minute long or less) cover a wide swath of topics, from "Spirit Animals to Iron Eyes Cody to the extinction of many species including the dodo and the passenger pigeon plus deforestation. The song titles and explanations take a somber approach to the present as well as the possibilities of a future while the music roars, shimmers, shudders, dances, and moves inward. Pieces such as "Last Flight of the Dodo" and "River of Fire" have a tremendous urgency thanks to the insistent percussion and the powerful bass lines. "River..." has a stunning guitar solo plus Kono's bass clarinet-through-an-amplifier sound that emulates Jimi Hendrix.

"Tipping Point" has a hard bop feel: the song, inspired by Charles Keeling (1928-2005) the American scientist who first reported on the rise of CO2 levels in the atmosphere....in 1958! Te song would be out of place on a Blue Note Records album from the mid-1960s i.e. Wayne Shorter or Herbie Hancock.  Kono's powerful tenor leads the way and takes in a free-for-all with the band (especially McCann and Hey) near the close of the piece.  Meanwhile, the short "Spirit Animal" pieces are dedicated to the marmot, the condor, leviathan (whale), and beluga - three of the four are played on English Horn (double-reed woodwind) with "Leviathan" on bass clarinet.

The album closes with hope in the form of "Renewal."  McCann's acoustic guitar supports Hey's piano work with Kono playing the theme on flute. At the close of the piece, one hears a tape of the leader's daughter Sami sings the simple melody that served as the impetus for the composition.

Yes, the song titles carry a power of their own. But, even without knowing the inspiration for each song, "Don't Blink" is filled with attractive melodies, impressive solos, fine interaction, and a mature yet adventurous attitude of on the part of Ben Kono and the ensemble. There are many of us who believe that the half-steps forward and full steps backward taken by the last two Presidential administrations (with the support of the Senate and the House of Representatives) have not come close to solving the issues inherent in the song titles.  But, listener, keep an open mind when approaching this album - the rewards are many.

For more information, go to dontblinkmusic.org.  If you purchase the physical through Ben Kono's Bandcamp page - benkono.bandcamp.com - 50% of purchase price will be donated to Riverkeeper.org and the Sierra Club.

Here's a track to pique your interest:


When one listens to as much music as I do, you begin to notice when certain musicians crop up on various albums.  For the past few years, one of those musicians is pianist and keyboard player Matt Mitchell.  Currently, he's a member of Tim Berne's Snake Oil, Jonathan Finlayson's Sicilian Defense, and Anna Webber's Simple Trio plus he's recorded with Steve Coleman's Natal Eclipse, Rudresh Mahanthappa's Bird Calls, the Dave Douglas Quintet, Mario Pavone's Blue Dialects Trio, and a slew more.  Not only does Mitchell have "big ears", he's also an amazing improviser and a fascinating composer. 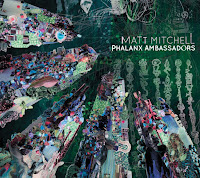 Mitchell truly writes for each voice in the ensemble so the pieces are not just head-solos-head.  Even the longest cut, ""Phasic Haze Romps" (15:53), is an episodic adventure with the instrumentalists movie in and around each other. While Ms. Gentile fills the bottom of the piece moving around her drum kit, Cass upholds the foundation of the music plus adds his harmonies, Mitchell and Ms. Brennan play counterpoint along with Okazaki.  There's a classical feel as well as an urgency in the music that makes it sound as if the quintet were sailing headlong into outer space. There are moments throughout the album (save for the short tracks) that are hypnotic, pulsing, and, ultimately, powerful.

The best person to talk about "Phalanx Ambassadors" is Matt Mitchell.  His essay on the recording can be found at pirecordings.com/albums/phalanx-ambassadors/ opens numerous doors of understanding for the listener.  The sound is thick, thick with the five musicians playing all at once but also thick with ideas.  Take time to explore this often-fascinating album.

For even more information, go to www.mattmitchell.us.