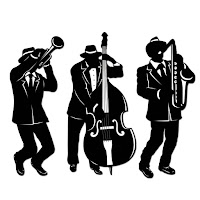 Face it - at this moment, there are, at least, a zillion trios (okay, maybe only a few million) working in jazz and creative music.  Whether it's by the musicians choice or by economic need, the trio "form" is well-known to most music listeners. To this listener, the best threesomes are the ones who break, or really, "tweak" the mold and are a working unit of equal partners instead of leader with rhythm section.  It's nothing new. Remember the Benny Goodman Trio with pianist Teddy Wilson and drummer Gene Krupa or Lester Young's Trio with Nat "King" Cole (piano) and drummer Buddy Rich? They was first formed respectively in 1935 and 1951.  Move to the 1980s for the trio of Paul Motian (drums), Joe Lovano (saxophones), and Bill Frisell (guitar); they were active up until the drummer's passing in 2011. Trumpeters Dave Douglas and Avishai Cohen have led successful trios. The list goes on and on.

This post looks at three recordings by two trios, one a regular working group, the other created for the studio.


Thumbscrew, the trio of Mary Halvorson (guitar, effects), Tomas Fujiwara (drums, and Michael Formanek (bass), came together by accident or divine intervention when the bassist subbed in a grape that the guitarist and drummer were playing in.  One thing led to another and they formed a trio (now they work together in Formanek's Ensemble Kolossus, in Ms. Halvorson's Code Girl, and Fujiwara's The Hook Up - unlike those groups listed, Thumbscrew is a true cooperative with each member contributing works for the group. In fact, the band's self-titled Cuneiform Records debut featured three pieces each by the members (as does the new recording, "Ours").  Since the beginning, it's been clear that these compositions are written with this band in mind. 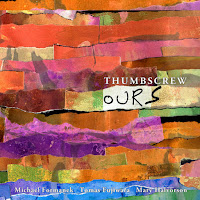 Now, we get not one but two new albums from Thumbscrew; like the others, both are on the Cuneiform label (a sweet surprise because the label was supposed on a year-long sabbatical).  "Ours", as stated above, is composed on all original pieces while "Theirs" features 10 classic works by a fascinating blend of composers. The pieces on album #1 go in so many and varied directions.  There's the well-constructed melody of Ms. Halvorson's "Snarling Joys" that opens the album.  She builds such a fascinating picture as there piece commences. The rhythm section feeds in ways that may remind some of the psychedelic jams of The Grateful Dead.  Formanek's "Cruel Heartless Bastard" has the feel of work by Nirvana, save for the crazy variations on the speed of the music.  The thunderous drums and bass that open Fujiwara's "Saturn Way" have an ominous feel heightened by the skewed guitar sounds.

The bassist shines on "One Day", his strong melodic feel plus his innate sense of rhythm is the driving force of the piece (Fujiwara drives it forward as well but the bass is more upfront).  My favorite song title is Formanek's "Words that Rhyme With Spangle (angle bangle dangle jangle mangel mangle strangle tangle wangle wrangle)" - it takes a long to write that title as it does to listen to the song (4:59) but what a fun cut. There are moments when this music gets so funky while the guitarist dances atop the beat.  The song that closes the album, "Unconditional", is a sweet ballad from the pen of the bassist. It's a treat to hear how each member embellishes the melody, Ms. Halvorson taking the lead, Formanek playing counterpoint, and the rolling drums that color the proceedings. 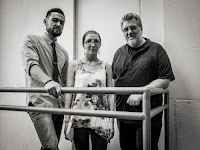 "Ours" and "Theirs" were recorded over four days in June 2017 while the trio was in residence at City of Asylum in Pittsburgh, PA.  In its own words, "City of Asylum creates a thriving community for writers, readers, and neighbors."  The directors first invited the Trio there in 2015 which led to their second album, "Convallaria."  Both times, Thumbscrew had the time to workshop the material and try the songs out in front of an audience before recording.  That could be another reason why the music sounds so fresh.

Here's the other lovely ballad: 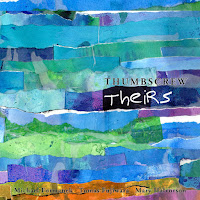 The composers that Thumbscrew investigate on "Theirs" include Benny Golson, Jacob Do Bandolim, Herbie Nichols, Jimmy Rowles, Brooks Bowman, Evelyn Danzig, Julio De Caro, Wayne Shorter, Stanley Cowell, and Misha Mengelberg.  Some names you might recognize, others you might know the song but not the composer (Bowman composed "East of the Sun" for a Princeton review while Ms. Danzig is best known for "Scarlet Ribbons"). Then there are "foreign" composers such as the late Mengelberg, the Brazilian Do Bandolim, and the Argentinean De Caro. The project reminds me of the "Free Jazz Classics" that Ken Vandermark & The Vandermark 5 recorded in the early 2000s, several albums on which the band revisited music by the artists who influenced them individually and collectively. 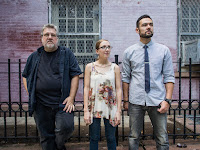 That's what happening here. We hear Nichols's delightful "House Party Starting" with its melody that straddles bebop, Monk, and blues. Shorter's "Dance Cadaverous" opens gently, the three musicians feeling their way into the melody. Ms. Halvorson's electric-acoustic guitar sounds like a mandolin on the theme; slowly, the piece opens up, the intensity rises and Fujiwara leads the way.  The trio deconstructs and the re-constructs "East of the Sun", making oblique references to the melody all the way through. The album's "dance piece" is "Benzinho"; composed by mandolin master Do Bandolim (1914-1969), the music bounces along happily.

Among the 10 cuts are two surprising performances. Jimmy Rowles's "The Peacocks" is a certified "classic standard" with hundreds of cover versions since the original was issued in 1975 as a duo piece featuring the composer on piano with saxophonist Stan Getz. Here, the trio opens the piece in rubato but soon moves onto the melody in a slow, gentle, fashion.  Ms. Halvorson's effects create a short echo at the end certain but she stays true to the melody through the bridge and into the next verse (the bass counterpoint is also gentle and filled with quiet spaces). While the guitar dominates the solo section, the rhythm section keeps its cool and the piece is a treat. The reading of "Scarlet Ribbons (For Her Hair)" owes much to guitarist Johnny Smith's 1958 version (listen here), especially is slow and steady pace as well as the gentle reading of the melody. Fujiwara's brush work is so sweet while Formanek is steady and solid beneath the wide-ranging solo.

"Ours" is a blueprint for the music of Thumbscrew - yet, the band has been together for three years at the time of the recording so one feels this album is as much listeners to understand the myriad influences that goes into the compositions of Mary Halvorson, Michael Formanek, and Tomas Fujiwara.  The trio is one tour the second half of June and then has a six-day run at The Village Vanguard in New York City (July 17-22). One hopes this excellent pair of recordings gives a boost to the fortunes of Cuneiform Records, one of the most impressive of independent labels in the United States.

Pianist and composer Theo Hill, a native of Albany, New York, first studied jazz piano with the late (and, in her neck of the woods, legendary Lee Shaw (1926-2015). After graduating from the Jazz Conservatory at SUNY/Purchase, Hill moved to New York City.  Slowly yet steadily, he has built quite the resume working with drummer Jeff "Tain" Watts, trumpeter Wallace Roney, vocalist Gregory Porter, and many others. He has recorded with trombonists Frank Lacy and David Gibson; currently he holds down the piano chair in the Mingus Big Bang and with T. S. Monk. His debut album. "Live at Smalls", came out on SmallsLIVE in 2014 and featured a quintet. Hill now records for Posi-Tone Records which released his label debut, a trio date titled "Promethean", in May of 2017. 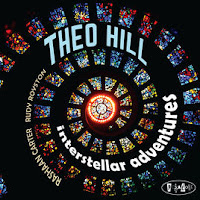 Hill's new Posi-Tone recording, "Interstellar Adventures", features the first-rate rhythm section of Rashaan Carter (acoustic and electric bass) and the sublime Rudy Royston (drums and percussion).  The ensemble alternately dances, roars, pounds, caresses, and glides its way through a program that includes five Hill originals plus five songs by composer/performers you could say are the pianist's influences and musical mentors.  "Promethean" only had one original amidst the 11 tracks, with two composed by the late Kenny Kirkland.  You can hear the influence of that pianist's appealing ballad "Revelations" as well as on Hill's originals, such as the title track. It's in the turn of a phrase or the attack at the beginning of the solo; not overt but there.  Hill also covers Marcus Miller's "For Those Who Do" and one can hear how his flowing lines show that pianist's influence.

Instead of looking and listening for influences, dig into the music itself.  The trio shines on Tony Willams's "For Those Who Do", a fiery number that flies forward on the propulsive bass lines and the thunderous drums.  Hill taps into those energy sources, builds on its intensity, and delivers a stunning performance. Sam Rivers's "Cyclic Episode" may start in a gentler fashion but soon builds up its own head of steam. This time, it's Royston responding to Hill's flying fingers and matching him phrase for phrase, power to power. Carter's bass is the foundation but he really captures the intensity. Hill moves to electric piano and Carter to electric bass for a romp through Jan Hammer's "Thorn of a Wild Rose", a tune the composer recorded with both Charlie Mariano and Elvin Jones.  The thick bass groove, the delightful cymbal work, and the leader's strong piano work give the song a real lift.

Hill's originals shine as well. After an introspective opening statement, "The Comet" thunders out on the power of the pianist's left hand (a hint of McCoy Tyner here), Carter's intelligent bass work, and Royston's percussive storm. It's breathtaking music at any volume but, played very loud, might just bring down walls. The album closes with "Enchanted Forest" with both Carter and the pianist going "electric." The bassist gets the first solo, showing a melodic side to his obvious impressive technique.  Hill approaches the electric piano in a different manner, somewhat quieter, and enjoying the sonic capabilities of the instrument. It's a placid finish to an imposing program.

The interaction of the three musicians, the intelligent compositions, and knowing the strengths of the rhythm section, all that and more makes "Interstellar Adventures" worth listening to again and again.   Theo Hill is making the most of his many and varied collaborations and sideman gigs, maturing before our very ears.  Going to be exciting to see and hear how he continues to grow.

Turn it up and feel the power: