Power & Subtlety From The Rhythm Section Up

Percussionist and educator Rogério Boccato, a native of Brazil, has worked on many fine recordings including Maria Schneider's "The Thompson Fields", Billy Child's "Rebirth", and Alan Ferber's "Jigsaw", to name but three. It's easy to understand his popularity in rhythm sections: his style is often understated, spare, creating colors with his hand percussion, his delightful way with brushes, and how he can play so powerfully without overwhelming the rest of the musicians.  Currently, Boccato is on the faculty of the Manhattan School of Music as well as the Hartt School of Music/The University of Hartford.  He also performs with pianist Fred Hersch (Pocket Orchestra), saxophonist Jimmy Greene, and with the Maria Schneider Orchestra. 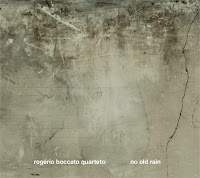 His debut album as a leader is "No Old Rain" (Red Piano Music) and it features the Rogério Boccato Quarteto with Dan Blake (tenor and soprano saxophones), Jay Anderson (bass), and Nando Michelin (Fender Rhodes).  The two-day session (June 1-2, 2016), recorded in bassist Anderson's home studio, is a 10-song program featuring music composed by Milton Nascimento, Egberto Gismonti, Toninho Horta, and Edu Lobo.  The use of Fender Rhodes may remind some listeners of Chick Corea's work with the acoustic version of Return to Forever (the group that first recorded for ECM) and Herbie Hancock's work on Wayne Shorter's interpretations of Nascimento's music on "Native Dancer" (1974).

Blake's soprano playing is quite impressive (and, happily, not just a clone of Shorter's iconic playing) - when he and Anderson make their way through Lobo's "Canto Triste", they do so with warmth and emotional tenderness.  If you have never paid attention to Anderson's bass work, he is one of the modern masters of ensemble playing, with a rich tone and an intuitive ear for counterpoint. In the opening minutes of Horta's "Bicycle Ride", he and Blake, on tenor, introduce the melody, work through it playing melodic phrases with and apart from each other, before the Rhodes and drums enter.  The addition of Michelin and Boccato changes the tone of the piece, moving the music away from the melody into more rhythmic areas.

The program is also intelligently programmed.  The first three tracks - Nascimento's "Cais" and "Clube da Esquina no. 2" plus Gismonti's "Tango" - flow easily into each other.  The next three tracks do the same - the afore-mentioned "Bicycle Ride", Gismonto's "Bianca" and Nascimento's "Cravo e Canela" - and it gives the listener the feeling of being a spectator, watching the four musicians feed off each other and the material, making logical musical decisions as well as surprising connections.  Later on the album, the Quarteto pairs Horta's "Pedro da Lua" and "Viver de Amor." On the latter track, Michelin creates a delightful solo as he rides the waves created by Boccato and Anderson, interacting with them as well as raising the intensity leading into Blake's powerful tenor solo.

"No Old Rain" is a delightful exploration of Brazilian music that not only shows the influence the four featured composers had on percussionist Rogério Boccato but how he was influences by the North American musicians who explored the music of his native Brazil.  It's so easy to listen to this recording from beginning to end, 56 minutes of pure joy in playing music that speaks to the heart, the soul, and the feet.

For more information, go to rogerioboccato.com.

Here's a live version of the opening track (note Michelin on acoustic piano): 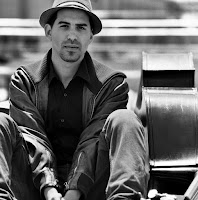 Bassist and composer Noam Wiesenberg, a native of Tel Aviv, Israel, first studied cello before switching to acoustic bass (at the age of 20). In his native country, he played with the Jerusalem Symphony Orchestra, the Haifa Symphony Orchestra, and the Israeli Defense Force Education Unit Orchestra.  He studied composition and arranging at the Jerusalem Academy of Music and Dance as well as jazz performance at the Rimon School of Jazz and Contemporary Music in Ramat HaSharon, Israel. Wiesenberg then moved to the United States to study at Berklee College in Boston.  After graduation, the bassist moved to New York City where he has worked with saxophonist Dave Liebman, drummers Antonio Sanchez and Billy Hart, guitarists Lage Lund and Jonathan Kreisberg, pianist Aaron Goldberg, and vocalist Camilla Meza. He also arranged music for vocalist Lalah Hathaway that she performed with the Metropole Orkest (conducted by Vince Mendoza) as well as serving as arranger/music director of drummer Ari Hoenig's Nonet. 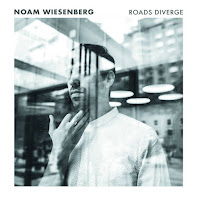 All those experiences has led Noam Wiesenberg to his debut recording as a leader.   "Roads Diverge" (BJU Records) finds the bassist in the company of Philip Dizack (trumpet), Immanuel Wilkins (alto saxophone, clarinet), Shai Maestro (piano, Fender Rhodes), and Kush Abadey (drums) with tenor saxophonist Dayna Stephens on the title track. Abadey is one of those drummers, like Rudy Royston and Eric Harland, who not only makes the music seem brighter but also creates colors with his fine cymbal work. Listen how he pushes the band forward on the title track. He and Wiesenberg lock in the groove but also move in and out, prodding the soloists to move in different directions. The drummer's work is so subtle throughout the first 2/3rds of "Shir Le'Shir" but notice how he, Maestro, and the bassist push below saxophonist Wilkins during his excellent solo.

The joy of this record comes from the excellent compositions, songs that have smartly constructed melodies and intelligent arrangements plus solos that are usually built off those melodies.  Philip Dizack's trumpet tone is bright and clear, his notes well-articulated while solos are often exciting.  He and Wilkins trade zones on "Resfeber", winding in and around each other as the rhythm section pours on the fire. Listen also tho the fine piano work of Maestro whose playing is a delight all the way through the program. Dizack shines on the ballad "Melody For Ido", his combination of phrases, some rising high in the trumpet's range, bringing a sense of controlled fire.  When that is meshed with Wilkins's warm alto tones, the results are impressive. 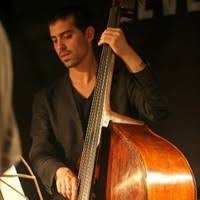 As for the bassist, he rarely solos, preferring to build the foundations of the majority of the nine tracks.  The two exceptions are the opening "Prelude", in which Wiesenberg plays the melody over the piano and keyboard effects of Maestro, and the album's final track, Radiohead's "The Tourist."  Wiesenberg overdubs himself on pizzicato and arco bass, not only playing the melody but also harmony and counterpoint on arco placed across the sound spectrum.  He also plays a short pizzicato solo.  Technically, it's brilliant without being flashy or showy.

"Roads Diverge" is an impressive debut album. All of Noam Wiesenberg's talents are on display, illustrating an artist with great promise and a fine ear for melodies and harmonies.  The quintet he writes for gives him a very large palette of sounds and the bandleader takes full advantage.  Give Noam Wiesenberg and his music a close listen.

For more information, go to www.noamwiesenberg.com.